Random thoughts at the 3/4 pole in the season! 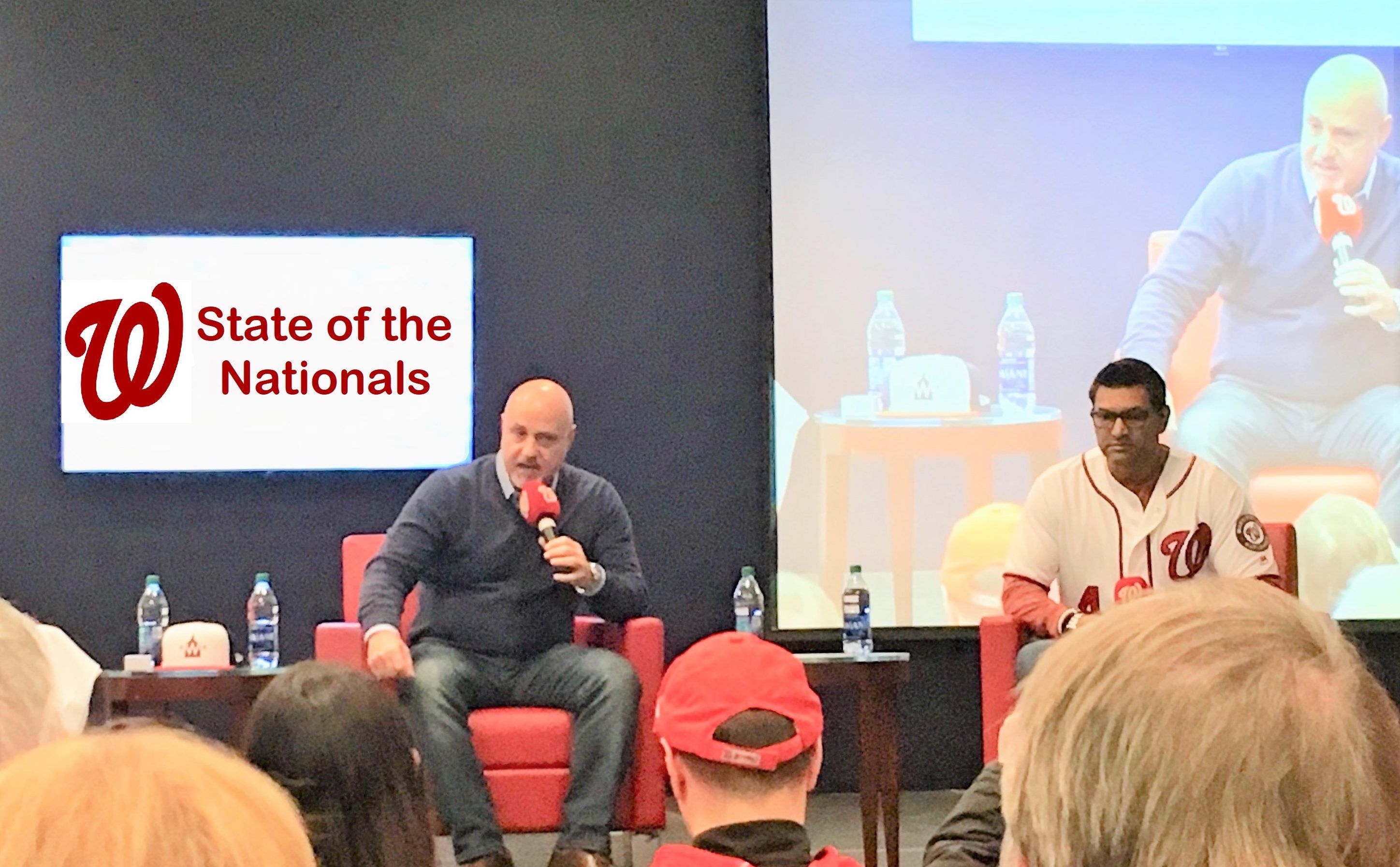 We have made it past the three-quarter mark on the season, and we are down to the home stretch. The Washington Nationals are so far behind that for all intents and purposes the Nats will crawl to the finish line. For the sake of a great draft pick, we can only hope that this team finishes near the fifth worst team to secure one of those top draft picks.

Manager Dave Martinez won’t take a dive or throw in the towel. He will play each game to win within reason as he has kept up his mantra of going 1-0 each day.  This team is playing hard for their boss although at times it has been sloppy and disappointing. Remember, this is what you get from younger players thrust into the spotlight. All you can ask for is that they play hard. He has limited star power on this roster, and it is just getting the most from what he has. Mostly, this will be about evaluation and hoping to see improvement by coaching up players. 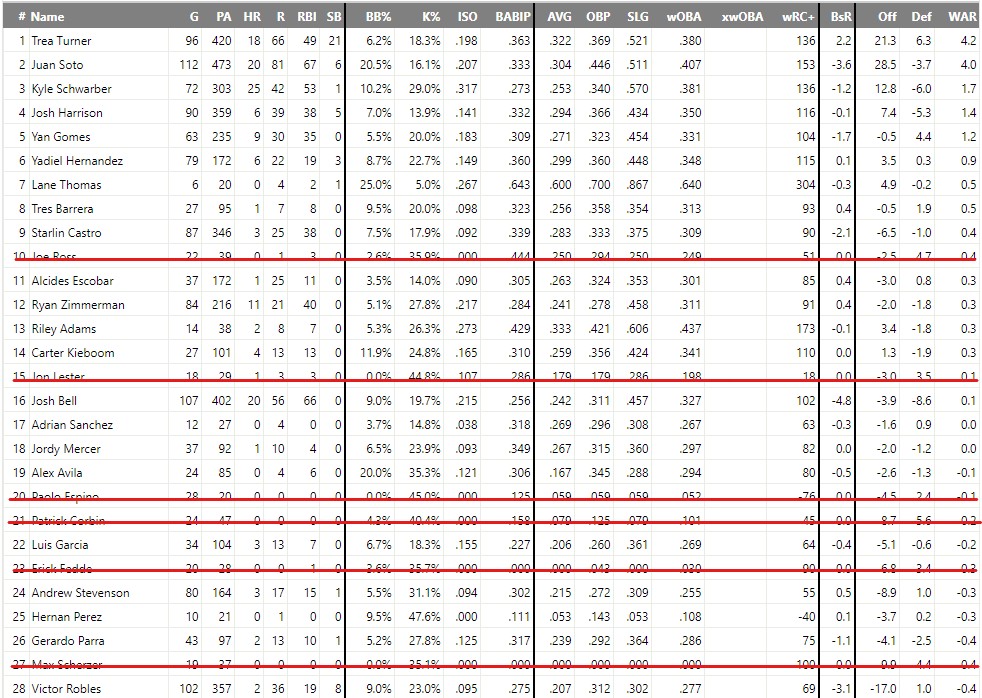 Of the Nats Top-6 players sorted by WAR, to include Max Scherzer, only one player remains on the Nats roster: Juan Soto. The other five players were all traded. A large chunk of this roster is now made up of a bunch of Triple-A players with limited big league experience who are playing for 2022 jobs. Yesterday, the starting lineup had three players who came over from other teams, four from the Nats’ minor league system, and Soto and Josh Bell.

Overall, the Nats rank 8th from the bottom in team ERA at 4.61. Obviously the numbers are skewed once you remove Scherzer from those stats. He was traded at a point when he posted a 2.76 ERA. The team’s second best starter, Joe Ross, is done for the year with a partially torn UCL in his pitching elbow. His final ERA for the season was 4.17. The bad news is the team ERA is 5.84 in the month of August. The shining star has been the newly acquired Josiah Gray who has a 2.86 ERA.

In addition, Patrick Corbin has started to figure out some of his mechanical issues and changed his pitch mix. Whether the league adjusts to him will need to be seen. In his last four starts, his WHIP is an impressive 1.042. His issues this season have been pitching him to his third time through the opposing batting order. Baby steps with Corbin. He is throwing more sinkers, and less 4-seamers that were getting crushed. He is getting more pitch-to-contact and allowing his fielders to make plays.

Beyond Gray and Corbin, the team is relying on Erick Fedde and Paolo Espino. Both are struggling to stay relevant. Going forward, the team is probably looking at Stephen Strasburg, Gray, Corbin, Fedde and a free agent for the 2022 rotation.

For the bullpen, you have seen the results of the inconsistencies with Jefry Rodriguez, Gabe Klobosits, and Mason Thompson. Andres Machado and Kyle Finnegan have been very good, and besides one blow-up from Ryne Harper, he has been excellent. The team activated both Austin Voth and Kyle McGowin from the 10-day IL to see if they can help. Voth loaded the bases yesterday in his first outing and was saved by an unassisted doubleplay by Carter Kieboom. With Voth it proved that it is sometimes better to be lucky than good.

All of those bullpen arms and starting pitchers are controlled by the team if they choose to keep them. They will be looking for mostly one-year free agent deals to plug some holes. The rest will be hoping that players in the off-season will go through self-improvement and show up to Spring Training ready to impress.

Besides Soto, you have seven other positions of maybes. That is incredible to think how poorly this has gone. We have the small sample size successes of Lane Thomas, Riley Adams, Tres Barrera and Carter Kieboom. But we also know Fool’s Gold after it has been exposed. Luis Garcia has been the starter at second base and is struggling to find holes in the defense.  At 21 years old, Garcia still has time to show what he can do.

With Alcides Escobar, he has been solid at shortstop, and kind of saved the day for the Nats who needed a veteran in the infield. He projects to about a 1.0 WAR player over a full-season. Would the Nats bring him back on a one-year deal? We will see.

If you remove Soto, the Nats next most valuable position player has been Yadiel Hernandez. Of course Thomas in less than a week’s worth of games has passed every position player in value except for Soto and Hernandez.

Then you have the issue with the team’s most expensive position player behind Soto, and that is Bell. He is a lumbering first baseman who has shown that the back of his baseball card (115 OPS+) might be the real player that he is. His up and down 2021 season with the Nats has him at a 112 OPS+ and a +0.1 WAR. He ranks 21st among the players who are first basemen, and while that isn’t awful, it also isn’t worth the contract he is on. He will be in his final year of team control after this season, and the team must decide how to proceed with him. He has performed almost as well as Anthony Rizzo which isn’t saying much. First base is a premium offensive position, and the Nats need help there. Would you pay Bell $8 million in 2022 to be your starting first baseman? Or would you spend the money elsewhere and see if Yadiel Hernandez and Riley Adams, both minimum salary players, can do it. What probably will cause the Nats to stick with Bell is if the new CBA has a DH for the National League.

From the movie Moneyball:

Scott Hatteberg:
[Responding to being asked to play first base for the Oakland A’s] I’ve only ever played catcher.

Billy Beane:
It’s not that hard, Scott. Tell him, Wash.

In real life, Hatteberg switched to first base, and actually prolonged his career. He played more games at first base than he did at catcher by over 300 games. Yes, Ryan Zimmerman can tell you that shifting from any new position is difficult. Some of what general manager Mike Rizzo has to do is think outside of the box for solutions. 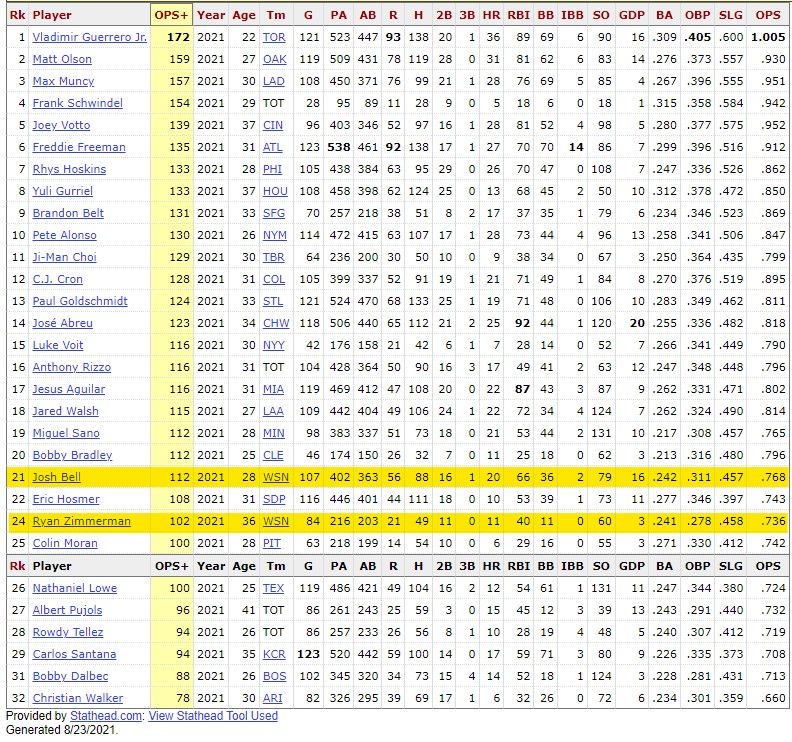 We wrote extensively about the struggles of Victor Robles in an article yesterday. In addition, Andrew Stevenson was optioned to Triple-A Rochester. The Nats need to find out if they have the answer in-house with the centerfield. Only Soto is assured a spot in the 2022 outfield.

At catcher, the team might have some answers with top prospect Keibert Ruiz, Riley Adams and Tres Barrera along with depth in the minors to choose two to three from the list to make the catching position a strength.

There are no clear answers at this point. We will have to see how this final quarter goes to see who does what. This will be an ongoing evaluation process. Can Thomas continue being a solid contributor? Will Gray continue to improve? Has Corbin figured out his mechanical issues? There are more questions than answers at this point.