A real-life “Summer Catch” for Donovan Casey could have a Hollywood ending after all! 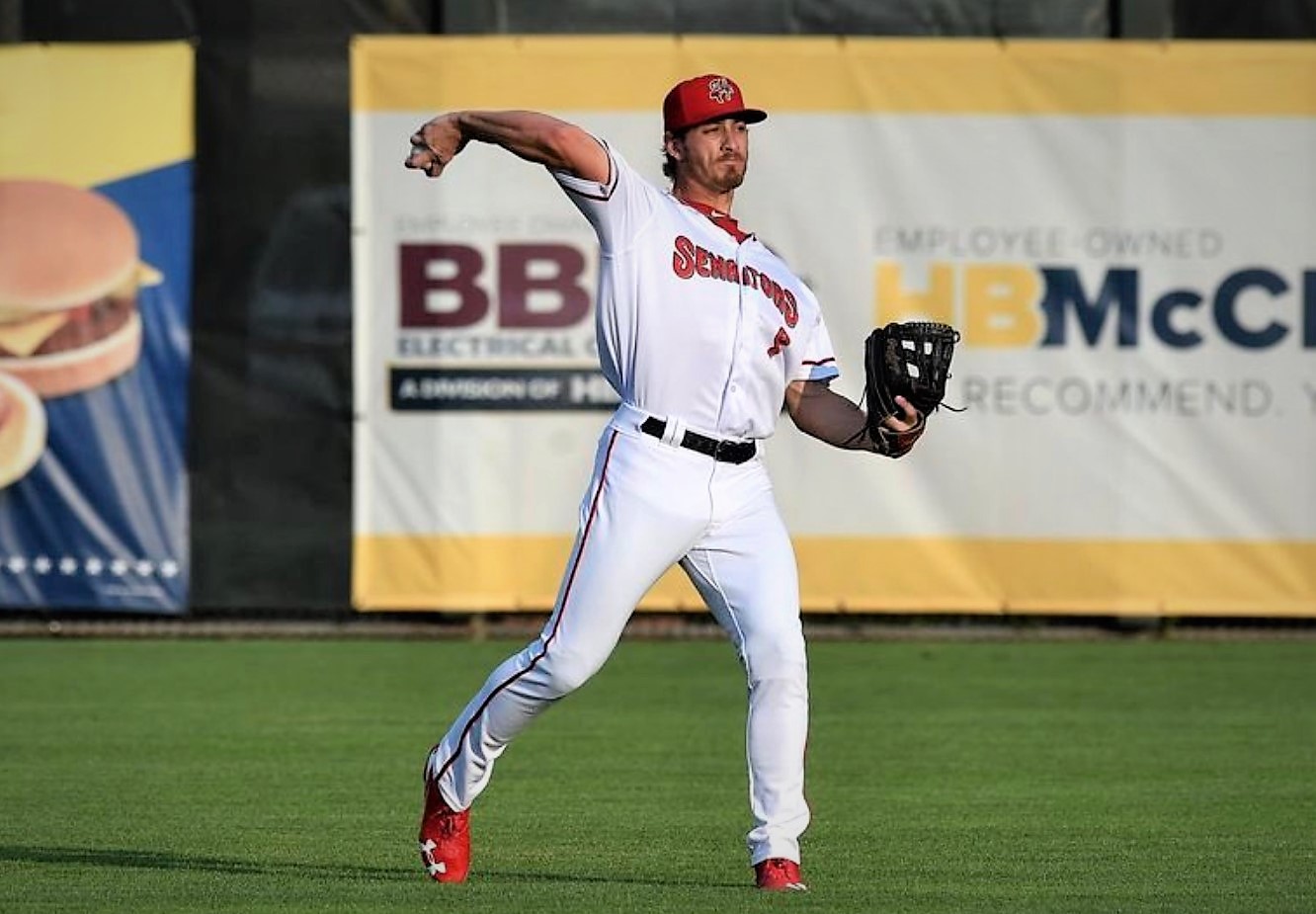 Photo provided with permission by Samuel Getty for TalkNats

Life imitates art which imitates life. The fictitious Ryan Dunne, played by Freddie Prinze Jr., in the movie “Summer Catch” was a college kid playing for the Chatham Anglers aka A’s of the prestigious Cape Cod League. It just so happens that a Washington Nationals prospect outfielder, Donovan Casey, played for the real Chatham A’s in 2016 and 2017, and he met his love interest, Mary Caroline, on the Cape much like how Dunne met Tenley Parrish who was played by Jessica Biel in the movie. In real life, Donovan and Mary Caroline are engaged to be married. There was no chasing her down at the airport.

Casey’s Hollywood moment was supposed to happen in his debut in front of the celebrities who frequent the Dodgers’ games. That dream ended the moment Los Angeles traded him to the Nats in the Max Scherzer/Trea Turner blockbuster deal. According to our sources, Casey was not a throw-in player in that trade. He was requested to be part of the package by Nats’ general manager Mike Rizzo based on the Nats scouting him in Double-A Tulsa. The Nats got Casey along with Keibert Ruiz, Josiah Gray, and Gerardo Carrillo in the deal with Ruiz and Gray as the top prospects who headlined the trade.

Maybe this trade was fate for Casey, based on Mary Caroline’s baseball fandom. She was an Expos fan by birth which of course the Expos became the Nats in 2005. Her family lived in Vermont and often made the drive to Expos games in Montreal.  She still has the Youppi doll from her youth. The Nats and her baseball life have come full circle. Now it is all about Screech and the Washington Nationals. Currently, her work life is in Boston where she is a teacher with summers off, an educator’s perk, and she can travel her summers to see Casey’s baseball games.

As a kindergarten teacher, Mary Caroline knows all about the twinkle of dreams in kid’s eyes. She has been able to talk to some of her students who are already playing t-ball. One young boy came in wearing his Ogden Raptors cap which was his t-ball team. One day the kids will tell stories of how their kindergarten teacher was married to the mighty Casey!

“You want big rewards — you have to take big risks,” Biel said in the movie.

In Casey’s relationship with Mary Caroline, they have taken risks given their geography that was measured at times in thousands of miles, and now, geographically speaking, they are closer with Casey back on the East Coast.

“I guess a risk for us would be deciding to date after that summer, knowing he was from New Jersey, me living in Boston, and knowing he was about to be shipped off to another part of the country! We’ve basically been long distance for five years.,” Mary Caroline said.

In Casey’s business, it is all about taking calculated risks. What the Nats scouts loved about him was his baseball smarts which they rated high as was his outstanding tools. They saw him nail a runner from right field at second base. They saw him run the bases, and they saw his power potential. In fact, Baseball America rated Casey as the best arm in the Dodgers’ system in 2020. He had 15 outfield assists in 2019, and the word is out there not to run on Casey.

The Nats immediately saw Casey’s above average speed and arm and moved him from the corner outfield to an area of need in center field. Upon his acquisition, he immediately moved to № 2 on the team’s farm depth chart of CFs behind Lane Thomas who the Nats picked up from St. Louis in a trade for Jon Lester. On Sunday, Thomas was activated to the Nats roster and had a good debut. Casey ranks higher on the prospect rankings.

With five top prospects getting most of the pub, Casey ranks 14th in the Nats’ farm system per Baseball America .  Most  of the buzz centers around the Nats’ four prospects in the Top-100 in their farm system with Ruiz (№ 13),  Cade Cavalli (№ 23) and Gray (№ 54), and Brady House (№ 86). The Nats have Jackson Rutledge not far from the Top-100, and Casey would be in the Top-250.

But given Casey’s showing in Double-A this year, he should move up further in the rankings. He is 25 years old and with the COVID washout of 2020, he isn’t exactly old, even for Double-A standards. The team has plenty of players older then him including some players in the 27 to 29 year range.

With the struggles of Victor Robles with the big club, can Casey get his chance this year? That might depend on how Thomas does in his time with the Nats.  The team could stick with Thomas since he is already up with the big club and just give Casey an invite to big league camp next year in Spring Training. For Thomas, he has had call-ups in three different seasons with the Cardinals and just never impressed enough with the bat. He has a new chance with the Nats and will he block Casey? In the two weeks since the former Dodgers’ farmhand joined Harrisburg, he has hit and hit and hit again, and in big spots.

Donovan Casey hit a walk off tonight for the Harrisburg Senators and he was inches away from making it a walk off home run pic.twitter.com/yZbRTKKgQ0

We know Casey has the defense to make an impact, but does he have the bat to make him a legitimate contender on this Nats’ roster? It is a fair question even though he is hitting well into the .340’s as of Sunday. The critics have noted his age and his propensity to swing and miss. The latter is the critical issue to discuss, and does it matter much if the player is hitting for average? In a small sample size with Harrisburg, Casey has a great K% at 18%, but it was 34% with Tulsa. Part of this of course could be attributed to facing pitchers who have little familiarity with him. Has Brian Rupp, his new Double-A hitting coach, made any adjustments?

Baseball America wrote, “swings and misses a ton. He [had] a 31% strikeout rate in Double-A this year, which is actually a slight improvement from his strikeout rate in 2019. Casey makes loud contact when he connects though. He has plenty of bat speed.”

Time will tell if the swing and misses are a real issue here. Pitchers get paid to show their swing and miss stuff, and every batter swings and misses — some, more than others.  If it is too much, you see it in that K rate. Some batters can improve through working on mechanics, better approach, and just getting the repetition and recognition helps this process along. This is all part of the fine tuning of a prospects’ game. With analytics and video, they will be able to tell if there are certain pitches and zones that are issues and work at it. This all leads to improved player development. This is all about the process and development in the minor leagues. At Harrisburg, so far, so good.

It always seems easy to forget about the players who do not have that first round pedigree. Whatever the Dodgers saw in Casey, their player development took this 20th round pick out of Boston College in 2017 and turned him into a player who was a High-A All-Star selection in 2019.

In a little over two weeks, on September 1, teams will be able to add September call-ups onto their roster. But that roster will be limited to a total of 28-players on the active roster. That means teams can only add two more players. There are probably five position players you could make a case for call-ups including Casey, Ruiz, Jake Noll, Daniel Palka, and Nick Banks. Add to that, there are pitchers who also deserve call-ups.  The team can only choose two and priority could just go to players who are already on the 40-man roster. Also keep in mind that some of the top prospects will play in the Arizona Fall League.

Is it Casey at the bat or Casey with the bat or both? Mudville will be enjoyed by all, and you can be sure the mighty Casey will have multiple Hollywood moments. 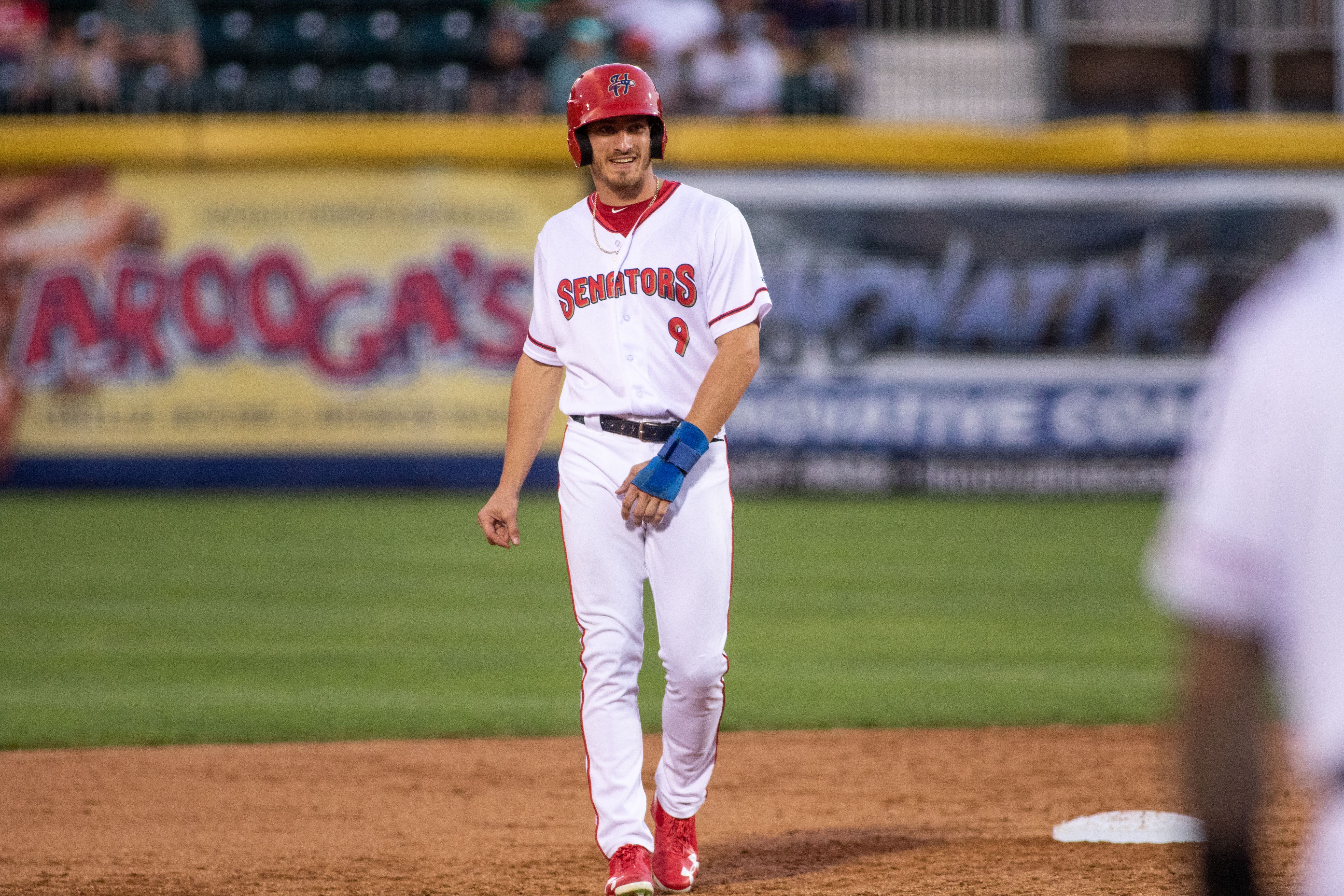 Photo provided with permission by Kyle Mace for TalkNats