Perspective: Mike Rizzo Did the Right Thing For the #Nats 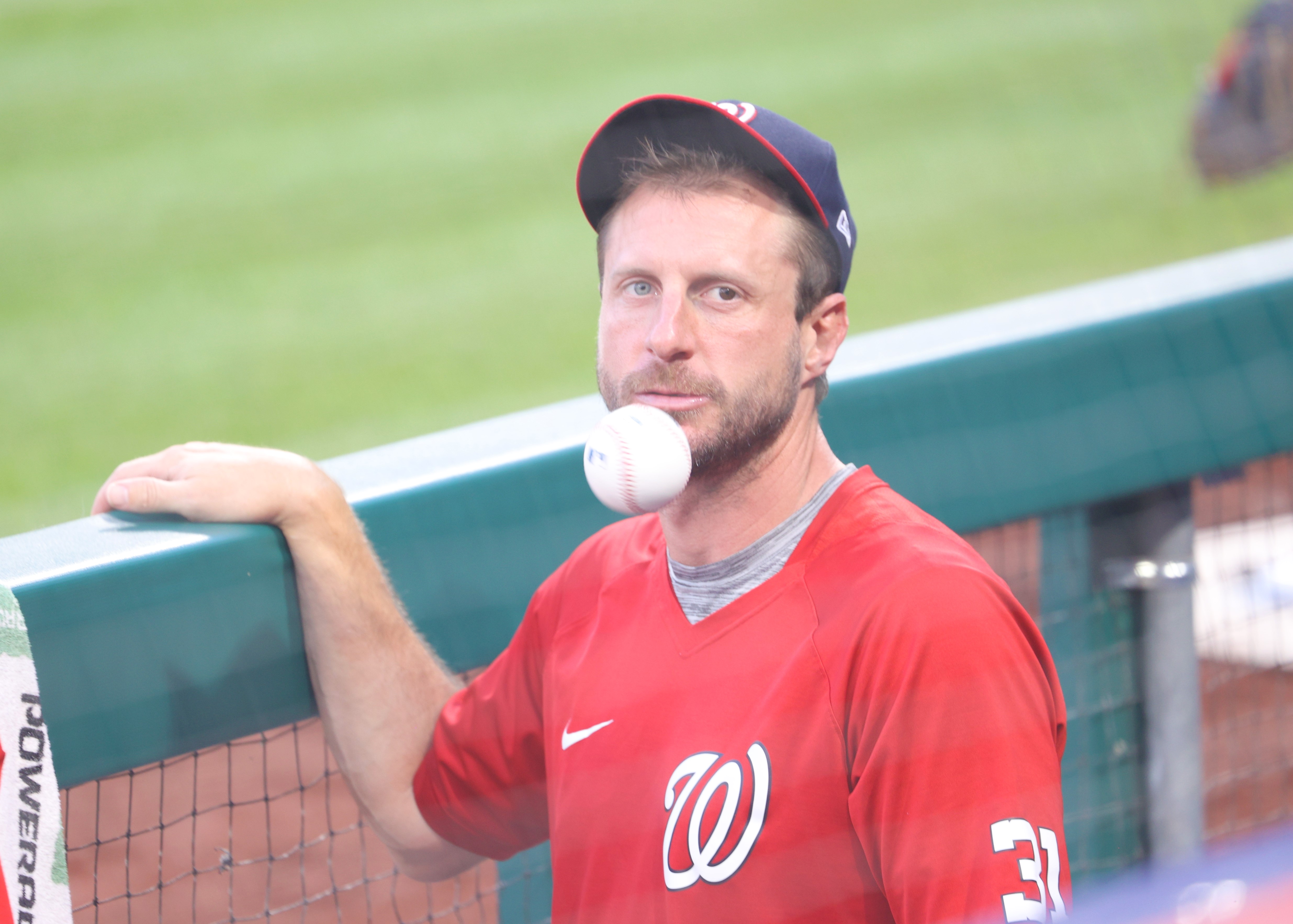 Last glimpses of Scherzer in the Curly W; Photo by Sol Tucker this past week

Before saying anything else, let’s make one thing very clear: it is never easy to say goodbye. Max Scherzer and Trea Turner have meant everything to the Washington Nationals and the DC area over their respective times for the team. For Mike Rizzo to trade them so swiftly took a lot of fans for a loop. Mike Rizzo has never traded any player with the type of profile of Scherzer or Turner. Rizzo has never been a true seller at the Trade Deadline, let alone sell two of his best players. It certainly took a lot for him and ownership to do this, but the fact of the matter is that they did the right thing and deserve a lot of credit for these moves to improve the future of this franchise.

Obviously, no one wants to see their favorite players leave the franchise. Max Scherzer has won countless accolades with the Nats, but the most important one is obviously the 2019 World Series title. He is an impending free agent, and it is unclear if the Nats will make a push to sign him in the offseason. Considering the way they dismantled the roster yesterday, it seems unlikely. Trea Turner has been a mainstay at the top of the lineup since his debut back in 2015. His speed is perhaps his most notable attribute, but he impacts the game in a manner that few can attest. His All-Star selection in 2021, his first, was just the cherry on top. The two of them are both generational talents, and the fans in DC will no doubt miss them. However, this move is more than just a momentary judgement, but one for the future.

In the past, Mike Rizzo has sacrificed the future in exchange for the present and going all in for winning. For example, the trade that sent Lucas Giolito, Reynaldo Lopez, and Dane Dunning to the Chicago White Sox in exchange for Adam Eaton. Giolito has transformed into one of the best pitchers in the game. Eaton had a huge role in 2019, but overall, the trade was not looked upon favorably for the Nats. It is also important to note that both Lopez and Dunning have carved out MLB careers, with Dunning actually pitching pretty well for the Rangers this season and scoring the White Sox their best pitcher Lance Lynn who was traded for Dunning. The White Sox turned Eaton into Giolito and Lynn.

Nonetheless, that is just a singular example of Rizzo going all in for a “win-now” move. He has done it constantly. In 2019, it worked. In the other years, it did not, like when they acquired Jonathan Papelbon from the Phillies in exchange for Nick Pivetta. Pivetta has been a serviceable pitcher this season for the Red Sox. Conversely, Papelbon has gone down as the “DC Strangler” after choking Bryce Harper in the dugout.

Rizzo has had other blockbusters like the Gio Gonzalez trade for the 2012 season, and the Sean Doolittle trade at the trade deadline in the 2017 season.

This instance sees Rizzo change his tune towards the Nationals when they are in the midst of a mediocre season. To be frank: the Nats were not making the playoffs this season. The Giants, Padres, or Dodgers could combine for three of the five Postseason spots, and the NL East and Central will round out the final two with the division winners. The Nats did not really have much of a chance at the division crown after going 7-17 in July. The weekend sweep at the hands of the Baltimore Orioles all but sealed the fate for the club.

Everyone knew that Scherzer was as good as gone at that point unless you were in some sort of denial or Max himself vetoed a deal. Even the MASN crew knew it, as they went through all of Mad Max’s greatest moments with the Nats, during his start on Thursday afternoon.

It was an emotional few days for the team the started with another outbreak on Tuesday with COVID. Yes, the second outbreak of the season, and the team was still able to trade Turner and Daniel Hudson from the COVID-IL, and Kyle Schwarber from the real IL with his hamstring issue. Still, these were stressful times at the trade deadline.

However, this was one that many fans had come to terms with by that point. Sad? Yes, but understandable. The trade still blindsided many fans who weren’t paying attention. Turner was not discussed to the same extent as Scherzer on the rumor mill. He has another entire season before he hits the free agent market where he will undoubtedly request a number north of $200 million as the speedster enters his age 30 season.

The trades made over the course of about 36 hours punctuated some of the most hectic moments in Nationals history. The Nationals are going in a different direction, and for many fans, back to the dark places, that the organization tried so hard to leave in the dust: irrelevance.

The worst thing for a team to do is hover around mediocrity like they did for 2020 and most of July. In the MLB, it is hard to win without a strong farm system. That makes a team very top heavy, and that is unsustainable for a team. The Nats tried that from around 2014 until present day. It was clear that winning was not going to follow.

Honestly, Mike Rizzo did what few had the heart or stomach to do: start over. It is so hard to say farewell to these franchise players, but it is a necessary step in the arch of this franchise. For the Nationals to experience long term success, it will be behind a different core. Look at the Orioles’ rebuild. Their window closed, but their front office did nothing, choosing to continue to run it back. They had no success. Eventually, they were forced to trade away Manny Machado for very little return. The Orioles lost everyone else to poor performance, free agency, or another cause. The Nationals seemed eager to learn from those mistakes.

Clearly, many Nats fans are unhappy with the moves, but the more educated fans found acceptance and almost a sigh of relief. But tough times are ahead in a retooling. Not because of the return for the players; that is actually all that can be desired honestly. The ire drawn from this is the emotional response to a team’s best players being moved. It is a hard pill to swallow, but one that is very vital for this Nationals franchise in order to experience long term success and to raise another banner. As amazing as it was to win it all in 2019, it would not have been possible without the casualties of players like Jayson Werth, Ian Desmond, and Jordan Zimmermann. It is a similar, yet different situation here, but the same sentiment applies. The team will say it is simply business. That is true,  but it still hurts. Nats fans, these next few months, maybe years, will be rough, but in the words of Davey Martinez, “bumpy roads lead to beautiful places”. This could be a very bumpy road, indeed.