Mike Rizzo should try a different approach to this trade deadline! 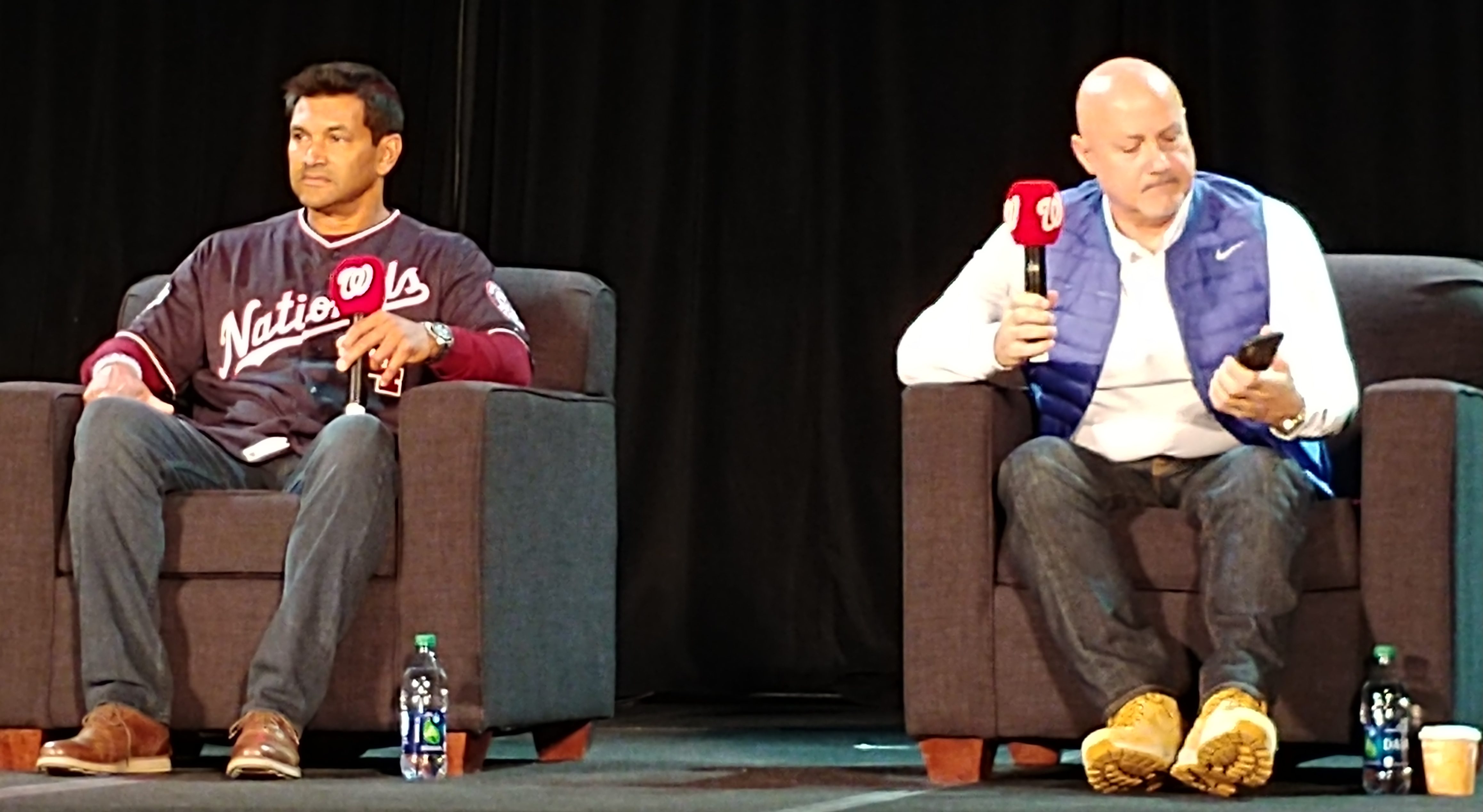 Mike Rizzo is never far from his phone, Photo by Andrew Lang for TalkNats

The best general managers are usually the ones who have World Series rings, and the Washington Nationals man in charge of the baseball side of the ledger, Mike Rizzo, has a ring that has not lost its luster. It isn’t even two years old yet.

The Nats are 6.0 games back in a crowded NL East with 67 games remaining to play. The line of demarcation is usually set at 7.5 games back. Rizzo starts every year in “win now” mode, but at some point he needs to consider a new approach to the trade deadline. My suggestion is to have a hybrid approach where you acquire a player or two like it is December in the Hot Stove to find players who could help beyond the current year.

While Rizzo has made trades generally for position players and relievers, and then gone the free agency route for starting pitchers, there were two times that he did put together blockbusters for Gio Gonzalez and Doug Fister many years ago. But he seemed to change his strategy to using free agency for starting pitchers and trades for position players.

On the other side, you sell current players who have expiring contracts and can bring back top prospects. The question right now is if Rizzo thinks he can retain Kyle Schwarber, Yan Gomes, Josh Harrison, and Max Scherzer beyond this year?

Don’t bother with a trade like Daniel Murphy for Andruw Monasterio and try to tell the fanbase you got back a good prospect. Let’s drop the sleight-of-hand B.S. here because the educated fans know the difference between a player like Monasterio and a player listed on Baseball America’s top-1oo prospect’s list.

Two players to consider trading for top prospects would be Brad Hand and/or Daniel Hudson. A complicated trade would involve Scherzer who holds full veto rights as a 10/5 player to say “no” to any proposed trade. Due to injuries, trading Schwarber and Gomes probably would not yield any top prospects. The third choice is of course to do nothing because nothing good materialized.

Rizzo gave his thoughts on Tuesday about the trade deadline with reporters at Nationals Park and he talked about a “dual path” approach.

“In the past, we’ve usually been a buy-first team, because we’re always in the midst of trying to win championships,” Rizzo  said. “I think we still feel that way as of right now, today. We’ll attack the trade deadline as we always do. We’ll be aggressive in whatever we do.”

“This year it’ll be a little bit different because of where we’re at in the standings. I think we’ll kind of go by a dual path, try and maximize our place in the standings, wherever that is, whenever we make that decision.”

“We’ll have our lines in the water on the buy side. We’ll also prepare some type of sell scenario if we have to, but we’re looking forward to playing better baseball for the next two weeks, and see if we can creep closer to the New York Mets, and see if we can make some noise in the National League East.”

Would anything that happened since Tuesday afternoon change anything? Probably not.

A reporter asked Rizzo if he worries about missing opportunities by not trading his players.

“I don’t worry about that stuff, because if there’s a deal you can’t refuse, we’re going to be aggressive,” Rizzo answered. “Recently at the trade deadline, with more and more teams that are active in this thing — and I think more teams feel they have a chance to win, I think the real deadline is later toward the actual deadline in the last couple years. I think that’s where we’re going to fall.”

We are just a week plus a day from the trade deadline on July 30.

This entry was posted in Feature, MikeRizzo, Prospects. Bookmark the permalink.
← Previous Article | Next Article →