Josh Bell rung up the 1st career win for Paolo Espino at age 34! 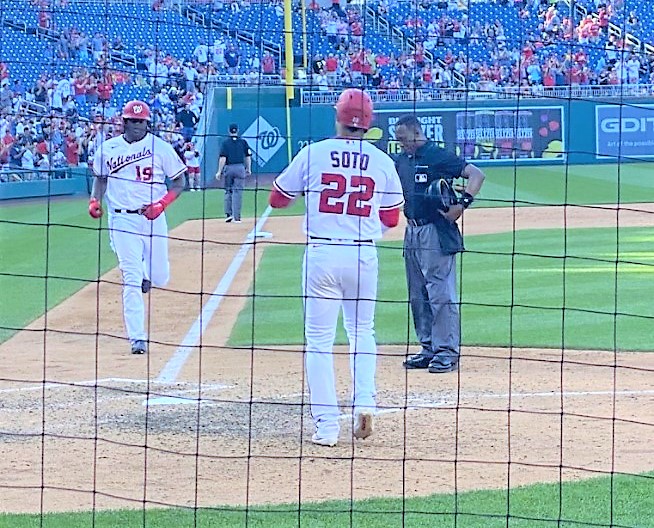 Photo by LGF for TalkNats

With this Washington Nationals win today, not only did the 34 year old Paolo Espino earn his first career win; it also was another series sweep for the Nats as they  improved to 30-35 with this 4-game winning streak. With a Braves loss tonight, the Nats would move into a tie with them for 3rd place in the NL East.

Filling in for Max Scherzer in this spot start, Espino went 5.0 innings of no run baseball. He only gave up 3 hits, and had no walks in this one as he handed off this game with a 1-0 lead to his bullpen. Fortunately Josh Bell hit a 2-run homer in the 7th inning because in the top of the 8th inning reliever Kyle Finnegan gave up a run and got in trouble. With 5 outs to get in the game, it was closer Brad Hand to the rescue and he saved the win.

But the big story is about Espino who had over 342 minor league games to go with 29 career MLB games and the perseverance paid off to get that first career win.

“I’m so happy I’m still here,” Espino said. “I just want to help the team as much as I can. Hopefully we go all the way.”

With this scoreless appearance, Espino improved his ERA this season to 2.28 over 27 2/3 innings. He came up big for his team in this game, and who knows what the team will ask of him next with the possibility that Scherzer returns next week.

The Nats first run of the game came from a 399 foot solo home run by Yan Gomes, and between Bell and Gomes, that was most of the offensive highlights to contrast against the lack of clutch in two separate innings where the Nats had bases loaded and one out and could not push across a run.

By going 0-4 today in bases loaded spots, this team is batting a pathetic .159 in 63 bases loaded at-bats. BABIP would say the Nats are unlucky, but the quality of the at-bats are generally poor as batters press. Yesterday Josh Harrison singled with bases loaded and he is batting .667 in those spots and Yan Gomes hit the grand slam in that game to where you would think the Nats were turning the corner in these situations — only to see them fall back into the abyss in those spots today.  Somehow the usually clutch Ryan Zimmerman is now 1-9 in bases loaded spots, and Starlin Castro who is on the restricted list is the worst on the team at 0-8.

Fortunately, Gomes and Soto and all of the pitchers except for Finnegan got the job done today, and manager Dave Martinez got the great start from Espino and nice appearances for Tanner Rainey and Sam Clay to bridge the gap to Finnegan and Hand.

Tomorrow is a day-off for the team before a four-game weekend series with the rival Mets.