Patrick Corbin showed his ace pitching; Are you saying there’s a chance?

The Washington Nationals got their much needed great outing from Patrick Corbin last night and that is good news. Unfortunately, Joe Ross had a 10-run meltdown the night before after he started the season as the Nats best pitcher. Health and consistency is the new problem while exposing other issues within the pitcher’s repertoires.

What do we mean by exposing issues within the pitcher’s repertoires? Both Corbin and Ross have all but abandoned the changeups they worked on in the offseason. Both are back to essentially throwing fastballs and sliders.

“You’ve just go back to your strengths,” Corbin said. “And everyone knows that’s my slider, and fastball command. I just really wanted to simplify things, get back to it.”

With enough movement and hitting their locations, both have shown in the past that it is enough to throw zeros up on the board, but as we saw with Ross on Monday night, he got lit up like a Christmas tree when his sinker wasn’t sinking with the desired movement. Corbin missed location on two 4-seam fastballs last night that leaked over the center of the plate and both were fouled off indicating that he either got lucky or he had enough movement on the pitches to get away with it. Ross was not as fortunate.

You will notice on this chart from last night that Corbin was still yanking his 4-seam fastballs too far, but he was fortunate in getting calls from the homeplate ump on four of those on/near the black. Corbin also increased his use of the 2-seam fastball (sinker) and only threw four changeups in the game. 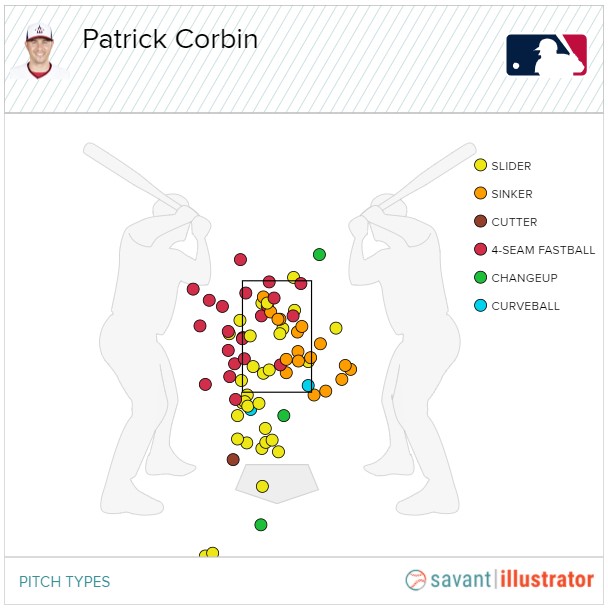 Even after’s Corbin’s six shutout innings last night, the team has an awful starter’s ERA of 5.72. Stephen Strasburg is on the 10-day IL with right shoulder inflammation, and Jon Lester still hasn’t pitched in a game for the Nats as he continues to rehab at the Alt Training Site. But you have to feel that Corbin’s excellent performance yesterday was much needed to clear him as healthy.

This team was built on starting pitching, and last year turned in the highest starter’s ERA (5.38) in Washington Nationals history. Think about that in historical terms to the days in 2008 when the starter’s salaries combined were less than half what the Nats are paying Strasburg this year. They say, “you get what you paid for” and we are seeing that in baseball terms that is not always true. When Paolo Espino is statistically your second best pitcher this season, you might have a problem.

This team is just under $100 million invested in starting pitching payroll this season. And 90 percent of that is being paid to the Big-3 of Strasburg, Max Scherzer and Corbin. The team and fans aren’t getting what they paid for — but maybe the payoff is coming. Fortunately, Joe Ross and Erick Fedde have stepped up in two of their three starts. The Nats largest free agent deal for the starting rotation this year went to Jon Lester who has not pitched yet in an MLB game this season because of his COVID situation. He is set to make one more rehab start this weekend at the Alternate Training Site in Fredericksburg.

Because of 4 off-days in the next two weeks, the Nats could conceivably go with four starters, could we see this in the next turn:

Then when Lester joins the rotation, it could be:

After that, we have to see where Stephen Strasburg’s health is. If manager Dave Martinez goes with a 4-man rotation until May 8th, that would give Strasburg 2 ½ weeks to get ready. If not, it would seem prudent to insert Fedde back into the starting rotation. There certainly is a lot of wait and see here along with some renewed cautious optimism. There’s a chance.