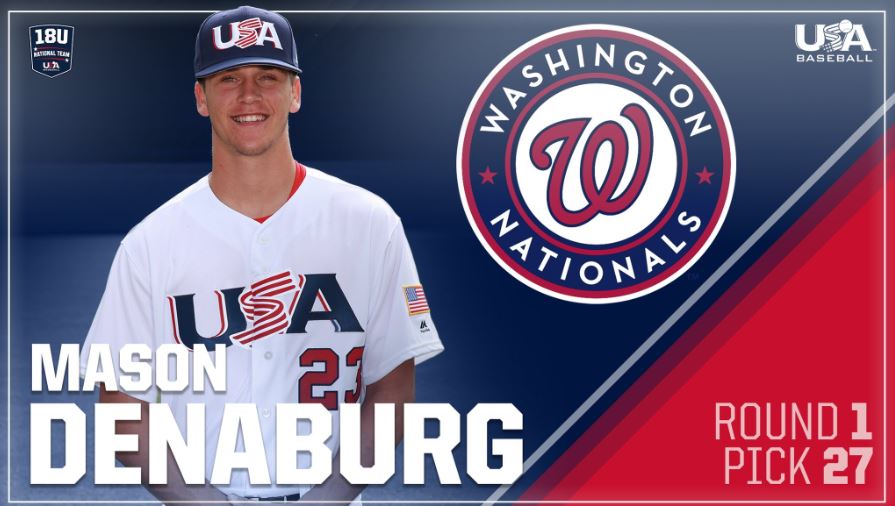 When the Washington Nationals drafted Mason Denaburg in the first round of 2018, they knew what they had at the time. Yes, ‘time’ is the key word. He is 21 years old now and would be the age of a typical college draftee now. But Denaburg has lost time — valuable time due to injuries that has changed his trajectory and the timing. The Nats had been down this path once before with Matt Purke who timed out. The team control has an expiration date with it — even with minor league prospects. After the 2019 season, Denaburg had shoulder pain and required what was described as a shoulder “cleanup” that was done arthroscopically which allowed a quicker recovery time. He is healthy now, and ready to prove he was worthy of his first round pick.  Baseball America ranks him № 8 overall of all of the Nationals’ prospects.

“I feel great now, obviously it wasn’t the most ideal start to a career, but it has taught me a lot about taking care of my body,” Denaburg told us. “In a way it has helped me mature a ton and feel like I’m in a great, healthy place now. Ready to go.”

That has to be music to everyone in the Nats front office that Denaburg has put his health issues behind him. He was the only Top-10 prospect who missed taking part in the Nats’ 60-man pool except for Andry Lara who was only 17 years old at the time.

With his 6′ 4″ frame, Denaburg fits that exact height as Cade Cavalli and Cole Henry, and like Henry has a similar repertoire.

“I am just throwing my 4-seam fastball, a curveball, and a changeup,” Denaburg continued. “I have seen much improvement in my changeup working on it throughout these last couple of years. And been working on finding the right grip for my curveball. I feel much better about my fastball now and am very confident when throwing it.”

Denaburg has also taken advantage of using the technology available and has been using the Rapsodo in particular.

“Most bullpen sessions I have been using the Rapsodo,” Denaburg said. “I’ve really enjoyed learning about what all of the different numbers and readings mean. It helps me with understanding what effects different grips have on the pitch I’m throwing. And also gives me an understanding of why doing one thing throwing can cause a different reaction. So its nice to have.”

Here is the current scouting from Baseball America:

TRACK RECORD: Denaburg was one of the top high school pitchers in the 2018 draft but was limited to eight starts his senior year by biceps tendinitis. The Nationals took him 27th overall and signed him for $3 million. Injuries have limited Denaburg in pro ball. He had shoulder surgery after a disappointing 2019 season and dealt with tenderness in 2020 before the pandemic shutdown. He began throwing with fewer restrictions at the start of instructional league.

SCOUTING REPORT: When healthy, Denaburg has a 91-94 mph fastball that touches 97. He didn’t show that velocity in his pro debut, but he impressed team officials with his progression during his recovery. Rehab pitching coordinator Mark Grater sent video to colleagues who say Denaburg has built up his body and is in the best shape he’s been. Denaburg also has a high-spin, upper-70s curveball that shows above-average potential. His developing changeup has potential to be average. Denaburg is a good athlete who caught as well as pitched in high school and fields his position well. He has to prove he can get to fringe-average control.

The Washington Nationals selected Merritt Island high-schooler right-handed pitcher Mason Denaburg in the 1st round with pick № 27 in the 2018 amateur Draft but limited to just 20 minor league innings so far. The team will hope to get him into real games this year at the lower levels of their minor league system.

Denaburg is a fireballer with a fastball that was clocked in the upper 90’s and that was what caught the scouts attention back in 2017 and 2018 before the draft. He is from Merritt Island which is just a few miles from Viera, Florida which was the former spring training home of the Washington Nationals. Alumni from Merritt Island High School include former Nats pitcher Taylor Jordan and former Pirates manager Clint Hurdle whose name appears on the High School’s baseball field.

Denaburg also had played catcher in high school and then switched to only pitcher and outfielder, and on offense he had some impressive stats at a .410 batting average (34-for-83) with eight doubles, three triples, five home runs, 21 RBI, 10 stolen bases and 33 runs scored in 28 games during his senior season. After he signed with the Nats, Denaburg paid off his parents’ mortgage.

“I pretty much just hunt, fish and play video games in my free time,” Denaburg said. “I just got into duck hunting this year and have been having a good time doing it with friends and family.”

For now, everything for Denaburg is centered on getting back into competitive games and helping the Nats in the future.