Baseball equipment has become flashier over the years in the designs of colorful cleats and painted bats, and whimsical patterns on gloves and catcher’s chest protectors, but technology in baseball equipment gets lost in it all. Baseball bats that are machine lathed to exact specs to get it to .001 of an inch in detail by a Locatelli seems like cheating the art form of craftsmen hand lathing them like the old days, but the need for precision is best served by robotic blades guided by lasers and computers. Rawlings started supplying gloves to Major Leaguers back in 1906 and have patents to back up their glove technology that continues to innovations we see evolving 115 years later.

Back in Spring Training 2020, What Pros Wear were talking up the new-age glove that Francisco Lindor was using called the Rawlings “REV1X.” They got a model number on it REV204-2X and the size at 11.5″ glove. Another player using a similar prototype was Trea Turner of the Washington Nationals.  We spoke to the industry expert, Mike Carozza, who is the Founding Editor at What Pros Wear.

“Well, I’d say for sure this glove will release to the public, likely in 2021,” Carozza told us. “I can’t be 100% sure, but I think Rawlings would be leaving a lot of money on the table if they didn’t release it.”

“The REV1X has been the most talked about glove of 2020, that’s for sure, and it’s been given to a bunch of pros. The two players I’ve seen wearing it in games are Trea and Lindor. When you see defenders of that caliber that are confident enough to use the glove in games, then you know it’s not a gimmick.”

“The synthetic/leather combo has been in play for years with Wilson’s Superskin and Rawlings’ Pro Mesh, but the REV1X takes it to another level as the entire outer shell is synthetic. While I’ve never held it, the synthetic outer materials save weight without losing structural integrity, while the leather palm and web give the player the same ‘feel.’ Ask any professional fielder, and they’ll say ‘feel’ is most important.”

Actually we went as far as contacting Lindsey Naber, Director of Marketing at Rawlings during the summer and again this week, and most of the details are still a trade secret.

“Can’t wait to share more info on this — it’s so futuristic and innovative — trust me!,” Naber told us. “It’s a new series coming out summer of 2021, so we’re keeping details under wraps for now. … We won’t be providing any info for a few more months (probably around Spring Training time). Sorry — it’s just that we are still making adjustments therefore keeping things under wraps at the moment.”

What we know is that the glove is a leather and synthetic combination. It looks like it might allow the fingers to flex easier than the typical glove to a grip like a venus flytrap mostly from the movement on the thumb to almost fully bend and close to the index finger. 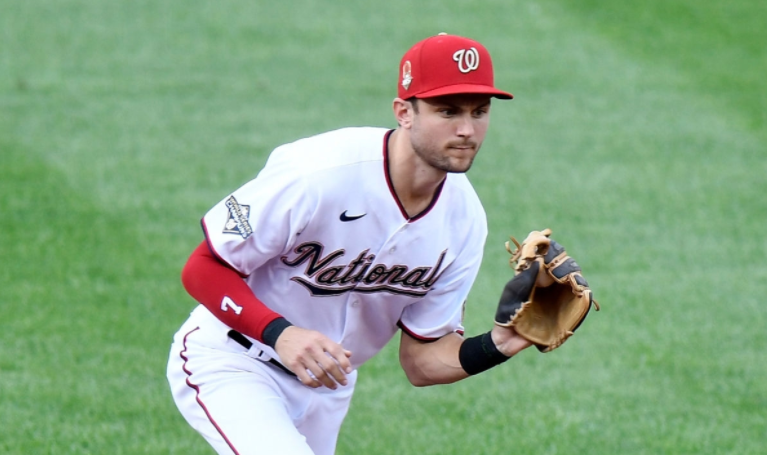 Have you ever seen a baseball glove close like that? Screenshot photo

The inside of the glove appears to be leather although thinner in thickness we believe to make it more pliable than what you would normally expect in a Rawlings glove although that is not confirmed. The webbing resembles a normal Trea Turner glove. There appears to be leather on the double-welted fingers, binding,  finger pad, and the lacing. Everything else is a synthetic material. 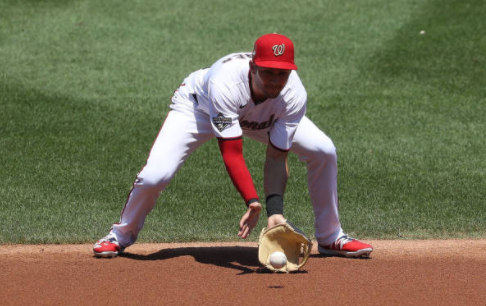 Screenshot photo gives more detail on the palm of the glove 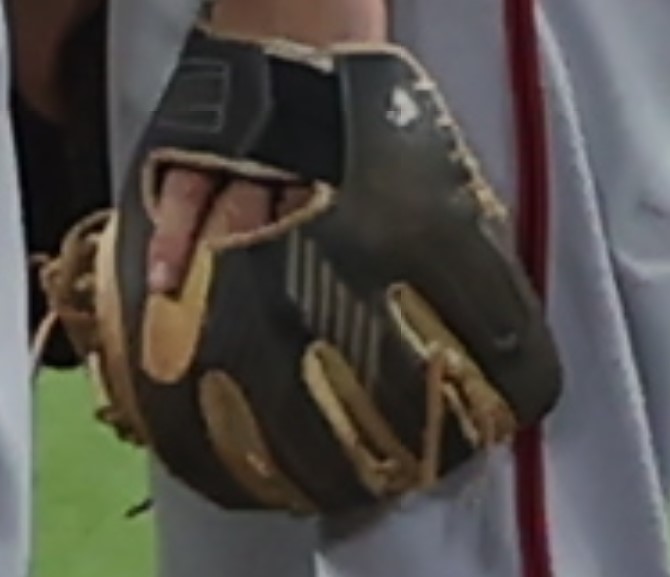 While much of the glove’s inner surface is leather, the most transformative part of this new technological breakthrough is the back of the fingers which ties in the synthetic materials with the leather as Carozza says “It gives the glove a futuristic look and it’s gotten a lot of players’ attention, including a Platinum Glover [used by] Francisco Lindor.” 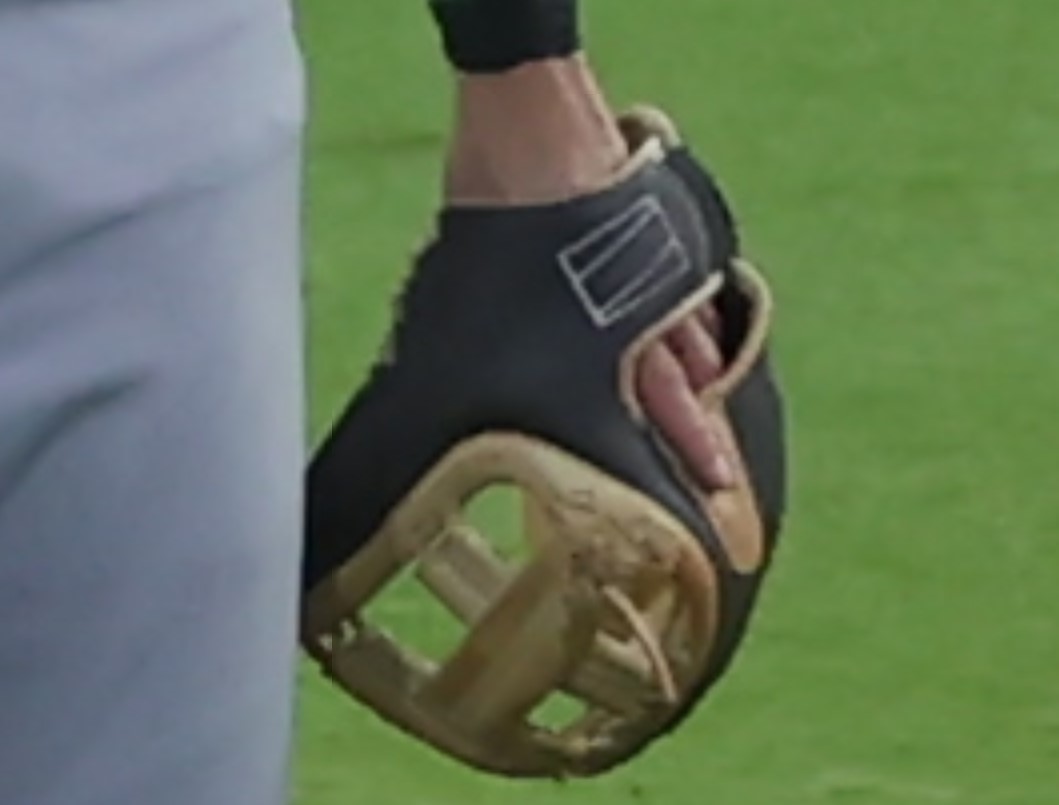 The glove (above) features a single post web, and What Pros Wear estimates is used by 22% of MLB infielders. Turner has also used the H web in his career similar to what Anthony Rendon used in D.C. and in the bottom photograph is an all-black REV1X prototype with an I-web that Turner used to finish the 2020 season.

In total, we counted that in the truncated 2020 season and Spring Traning, Turner used four different Rawlings gloves and two of them were REV1X models. He finished the season in the one featured in the photo below which was all black with accent stripes. 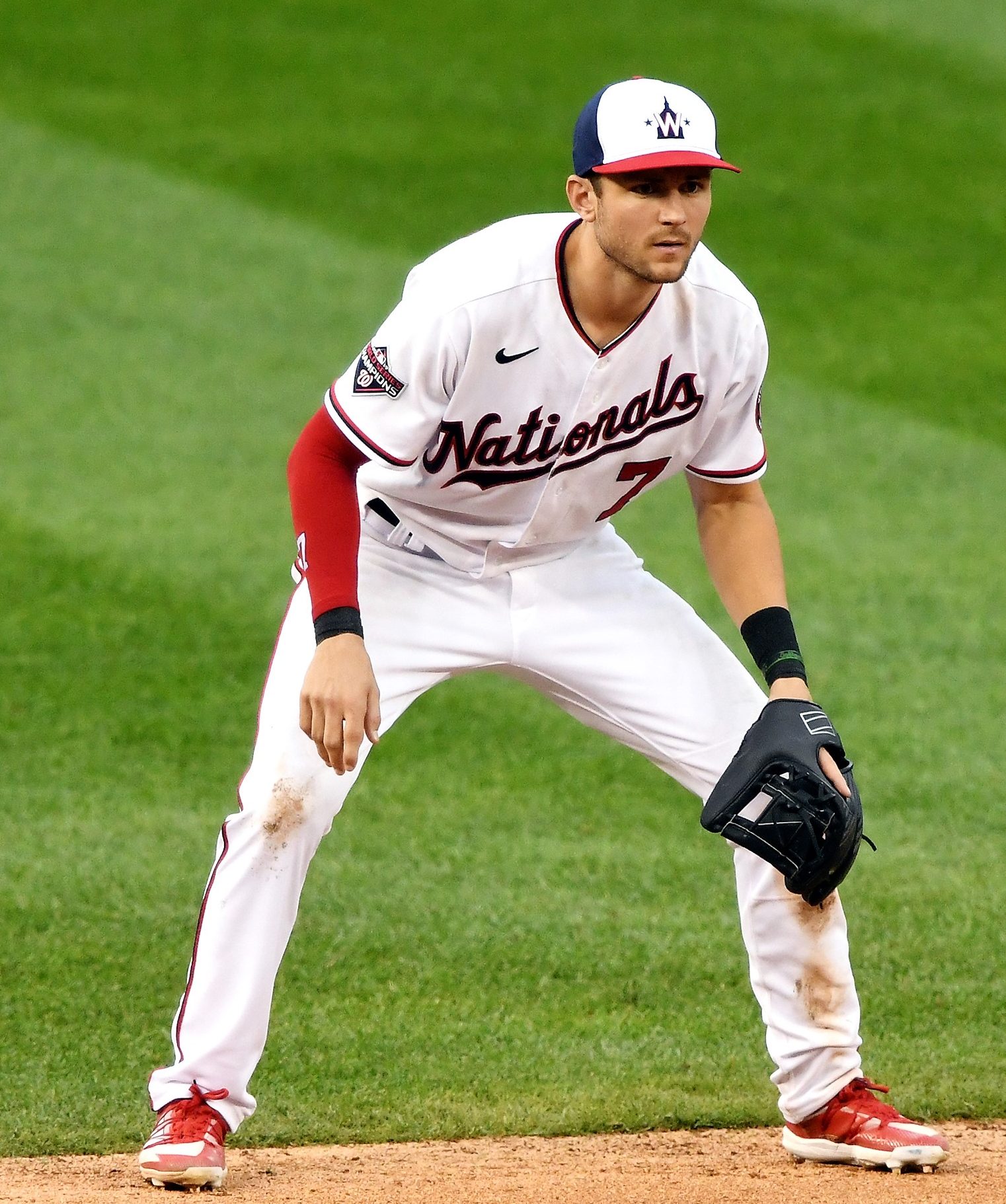 While Turner had a few more errors per game in 2020, some of those might have been attributed to the acclimation period with the new gloves. When he switched to the black glove pictured above, he had three errors in a six day span (Sept. 18-24) during the final dozen games of the season. His nine errors for the season would be great if it was a 162 game season, however in the truncated 2020 season that obviously is not good for a 60 game season. At final tabulation, Turner ended up with a .956 fielding percentage which was the worst of his career for a qualifying season. Only two of the nine errors were due to errant throws.

In a typical season, Turner might use just one glove for games, but clearly 2020 had turned into a season that Turner could experiment with different gloves and web designs once the Nats were out of contention. Below is a video from 2019 when Trea built a custom glove online with Rawlings and then shows it off after it was made. That custom glove technology is available to the public on the Rawlings website.