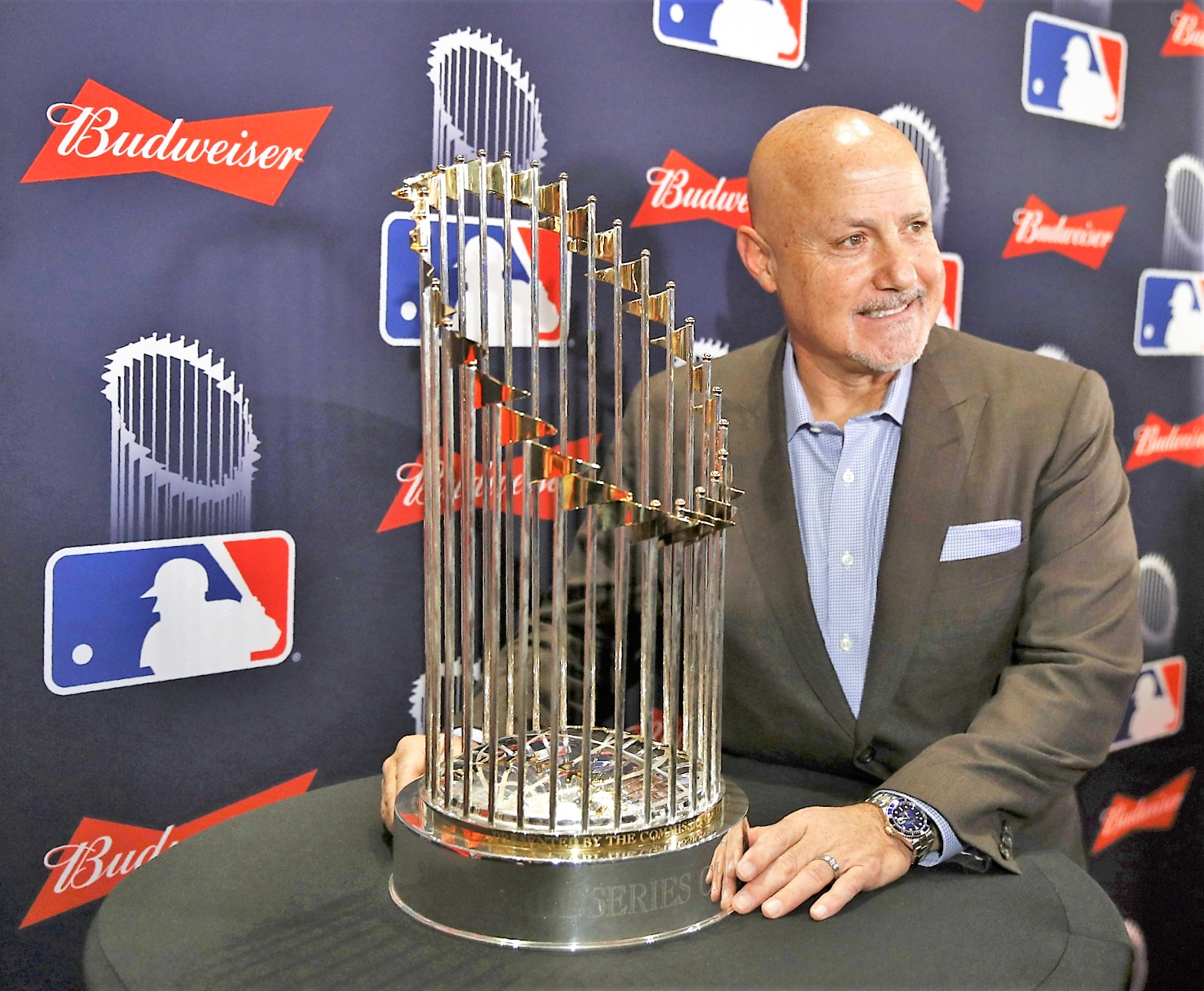 When the Winter Meetings went 100 percent virtual two weeks ago, it was about as exciting as watching paint dry. The normal media scrums that would be held in crammed spaces of a behemoth hotel were replaced by ZOOM meetings on computers. On Tuesday as you know, the Nationals made general manager Mike Rizzo and manager Dave Martinez available for their post-Winter Meetings media sessions. Rizzo did his session from his home, and Davey filmed his at Nationals Park. There were no bombshells dropped except for maybe Rizzo’s revelation that the Nats “haven’t had a serious conversation about Kris Bryant in probably two years.” Otherwise, it was staying politically correct while not tipping their hands.

Of course Rizzo was asked about his 2021 budget for the roster payroll. He was not going to divulge what it is, and it is quite possibly a moving target depending on revenue projections.

“The revenue issues, the budget issues, those are all very, very fluid,” Rizzo said. “They are changing weekly, if not daily, as far as how we’re going to handle that.”

That was probably an honest answer because the key unknown in the financial equation is the fans in the stands who will generate the revenue needed. The Washington Nationals are one of the teams that relies the most on its fans. Budgets by nature are fluid and not set in stone. The Nationals have a poor TV deal through MASN and no stadium naming rights which are two of the three largest single revenue components for a major league team. If the season was to be pushed back or the vaccine showed immediate success with plummeting COVID rates, then you would be more optimistic on the fan-generated revenue. More revenue translates to more spending on player acquisitions.

Since the 2011 acquisition of Jayson Werth in free agency, the Nats have spent either at the top of all teams or at least in the upper third of all teams. No team has spent more as a percentage of their TV revenue than the Nats. Rizzo then was asked a follow-up question about the “budget being fluid,” and he got cold feet on the word.

“Did I use the word ‘fluid’? If I did, I didn’t want to use that word,” Rizzo expounded. “With conversations with ownership, we feel that we have the budget to get a championship-caliber club, is what I meant to say if I didn’t say that. We’re out there. We have a process here. We do things a little bit differently.”

“Ownership has given me marching orders to put a championship-caliber club on the field. That’s my purpose. That’s my focus, and that’s our objective this offseason.”

As they say — the proof is in the pudding. We are going to see if Rizzo veers from his normal offseason course, and we will see if spending restraints hold him back.

This is one of Rizzo’s strategy speeches made at a season ticket holder event two years ago, and coincidentally right before the 2019 World Series season.

“When the offseason is done and Spring Training starts, we want to think that we have a 90-win type of team on paper. Games aren’t played on paper. I get that. I heard that, and I agree with it,” Mike Rizzo said at that event.  “My job is to create a roster analytically, and in the eye of the scouts and with the coaching staff, has a chance to win 90-games, and 90-games sometimes — some years means 85, sometimes 82, sometimes means 95 or 98. So depending on luck — happenstance, injuries, health, all that stuff it varies. My job is to put together a 90-win team on paper that can compete in the National League East, and in the National League, and I think we accomplished that this year.”

Right now FanGraphs has the Nats as an 80-win team on paper. The only way to build to that 90-win team is by acquiring top talent. Of course it takes a lot of money to sign the best players. We are exactly 105 days from the scheduled Opening Day for 2021 and only 60 days from the opening of Spring Training camps if everything goes according to schedule (doubtful).  Given Rizzo’s speech, we should know in less than 60 days if he met his 90-win goal on paper.

“I think our top priority in our search, via the free agent market or even the trade market, is trying to get a bat to fill in the middle of the lineup and kind of complement the rest of our middle-of-the-lineup bats,” Rizzo said. “We felt that our best bet would be to kind of surround the guys we have in the middle of the lineup already with some more bats and make our offensive production a little bit more of a priority this offseason.”

Getting a big “bat” is imperative in the lineup after Trea Turner and Juan Soto. If the Nats are interested in infielder DJ LeMahieu, as the Boston Globe reported, and I have been personally saying is the one free agent who seamlessly fits, then that 80-win team just jumped to an 83-84 win team on paper. Making up the rest will take additional moves, but you have to start somewhere — and DJLM would be a good start. 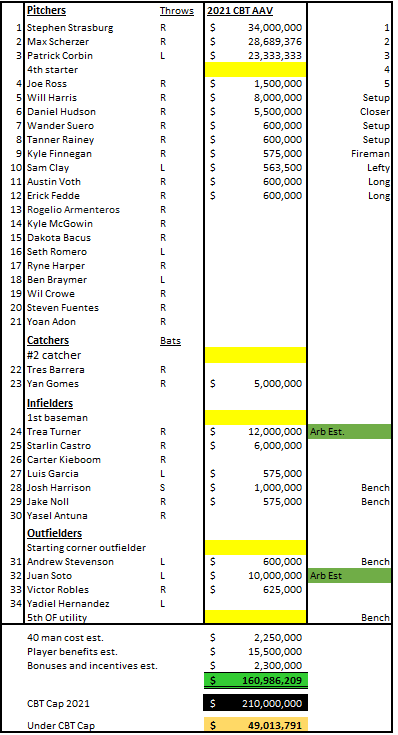 Back to the point on fan revenue. The Nationals fan attendance for the 2020 season was zero. Never has the impact been felt to this magnitude. No team put together a fan retention program like the Nats did during the 2020 season with a 50% rollover package of bonus money for season ticket holders who were willing to leave their money paid on plans with the team. Other teams had rollover packages and none were close to the Nats.

The Nats have also been known to send out gifts to season ticket holders at this time of the year. Normally it is a crafted crystal trinket for a memorabilia shelf like the baseball bat they did one year or a baseball glove with a Curly W on it. This year, the Nats went over the top with Nike gold jerseys with the World Series patch and the New Era authentic gold caps for full season ticket holders who will receive a pair of each (h/t Don H.). Per a source, half-season plan holders get one jersey and one cap, and partial-plan holders get a cap. That is some nice swag for the best fans in baseball. Well done Nats! 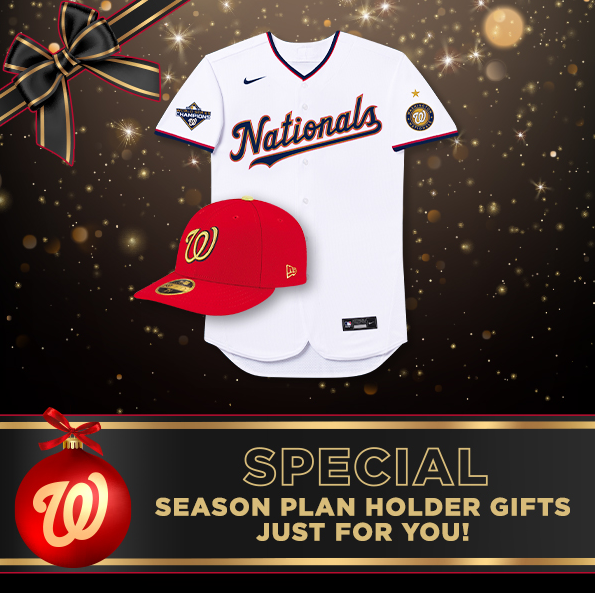