“The door was never closed” for Kevin Long, and he is back! 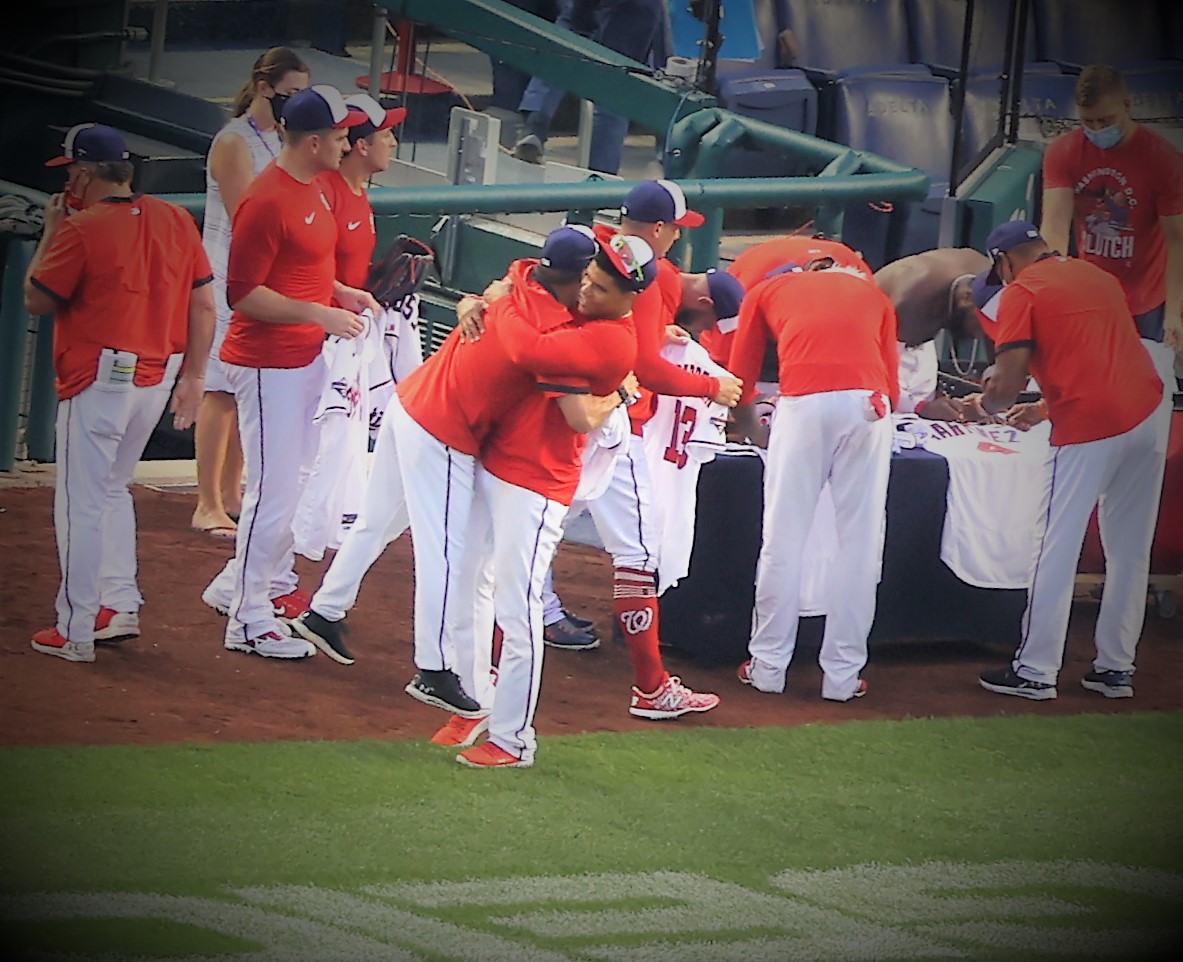 Juan Soto bear hugs his hitting coach after the final game of the season; Photo by Sol Tucker for TalkNats

When you are the youngest National League player to ever win a batting crown, you must thank your hitting coach. That is exactly what Juan Soto did with a bear hug that lifted hitting coach Kevin Long off the ground after the final game of the 2020 season as the 21 year old batted an impressive .351 with an MLB leading 1.185 OPS.

As the offseason started quickly for a Washington Nationals team that missed the playoffs, news broke that the team was going to have a coaching staff shakeup. There were headlines from other media that Kevin Long would not be returning. Our sources told us that was not necessarily the case. KLong, like all the coaches, are Nationals employees through October 31. Often, coaches are given permission to look around to seek other opportunities, and we were told that is what Long did.

“The door was never closed,” a source told us yesterday after news broke that Long would return for another season as the hitting coach.

We mentioned several times since the rumors started on Long’s departure that he could return, and the team was mostly happy with him. We also reported that players immediately contacted general manager Mike Rizzo in support of Long when they heard that Long might leave.

While we knew the whispers that Paul Menahrt would not return, we were told the Nats were mostly happy with Kevin Long’s offense. https://t.co/qAHP1dJZx3

Rarely do you see a reunion under these circumstances. Another source told us Long did not find anything better out there. Maybe that is a compliment to how good things are with the Washington Nationals or to look at it with some skepticism — maybe it was more about how bad things are in the economics of baseball right now. Whatever the case, only Kevin Long knows the real truth. The grass is not always greener on the other side.

“The Nats must add a new hitting coach to replace Kevin Long unless the team comes to terms with KLong which seems like a long-shot at this point,” we wrote yesterday and the long-shot came through for Long.

Again, the Nationals did not miss the postseason due to the offense. Sure there were issues like Victor Robles‘ slide in his stats, Carter Kieboom‘s lack of power, and players like Eric Thames who just could not get it going. But you had stellar seasons from Soto and Trea Turner as one of the top-3 duos in all of baseball. They kind of propped up the offense that had the 4th highest batting average in all of baseball in 2020 although 10th in runs scored. Still, with a Sweet-16 of teams going into the postseason, when you score a Top-10 in runs, the hitting coach did alright. Sure, not as well as 2019, and that is not all Long’s fault as he did not control the pitching. There was a reason the Nats made a change in pitching coaches when you are 5th from the bottom in team ERA (5.09) and turn in the worst starter’s ERA in team history (5.38).

So yes, Long should be back, and the offense does have room to improve. There is work to be done. One of the criticisms of Long was that the improvement we saw with Andrew Stevenson upon his return to the team on September 18th came from mechanical adjustments with the minor league coaches. Stevo, who had been exiled on July 31 to the alternate training site, made some slight mechanical changes to bring his hands back slightly. The results added more power and his bat remained on a plane longer in the hitting zone. In those final dozen games of the season, he was blistering hot (.417/.488/.833/1.321) that included two home runs off of Jacob deGrom and gave the Nats enough confidence to end the team’s relationship with the incumbent Michael A. Taylor. You can read more about Stevo’s success here with the caveat that he must repeat this for a much longer stretch of games before being crowned as the greatest hitter in Nats history.

The real work for Long and the analytics group will be to come up with plans on how to improve the struggling players who will be part of the 2021 roster. Fortunately for Long, most of the struggling players will not return to the team, but Robles and Kieboom are at the top of the list to be fixed. Also, the teenage Luis Garcia fell into a deep slump for seven of his final eight games when he only tallied one hit in that span. Garcia was batting .318 before the slump but still finished at a very respectable .276.

With the team making only one official press release on the hiring of pitching coach Jim  Hickey, we should hear shortly as to the final coaching mix for 2021. We have been told that bench coach Tim Bogar will be retained also and it is expected that first base coach Bob Henley and bullpen coach Henry Blanco will also remain on manager Dave Martinez‘s staff. We have not heard anything on assistant hitting coach Pat Roessler whose fate could rest with Long and Martinez. We do know the team has to replace Chip Hale who served as the team’s third base coach last year and for two years prior to that as Martinez’s bench coach.

To throw more caution to the wind, if a team approaches Bogar to interview for a manager’s position, like the New York Mets did last year, there is always the possibility that Bogar could depart for a managerial opening this off-season. For now, we welcome Kevin Long back into the mix and technically he never left since he was still under contract making his new deal, an extension, on top of his previous deal.

I noticed that Trea Turner watched most of the game when he was not in it standing next to hitting coach Kevin Long.

📸 by Sol Tucker for TalkNats pic.twitter.com/1PCwlWk6i7