The Nats are doing their best to be a spoiler and take this game from the Phillies! 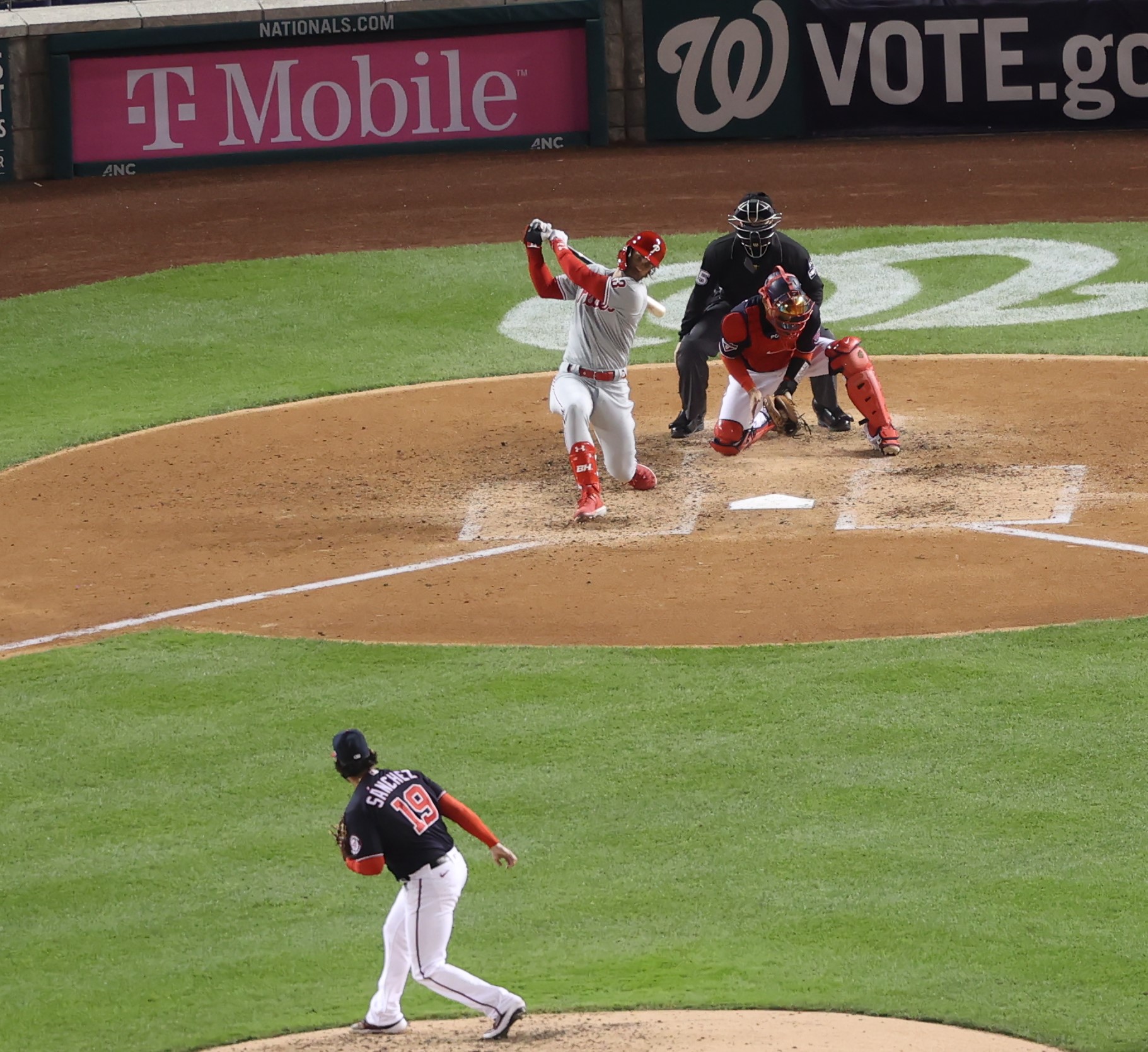 Bryce Harper strikes out on the splitter in the dirt as Anibal Sanchez finishes his outing; Photo by Sol Tucker for TalkNats

Sometimes you need a little bit of luck to win a baseball game, and the Washington Nationals had luck on their side in this one. Starter Anibal Sanchez gave up 4 hits and 4 walks over 5.0 innings on 105 pitches, and he bent but did not break. The only run that scored came off of a balk, and with the tying run on second base he threw the splitter to strikeout Bryce Harper who had an 0-fer and 3 K’s in the game.

The Nats bullpen was almost flawless. They covered 4.0 innings and held the Phillies scoreless in this 5-1 win. With the injury to Tanner Rainey, manager Dave Martinez threw Wander Suero in the 6th inning, Kyle Finnegan in the 7th inning, Will Harris in the 8th inning, and Daniel Hudson closed it out.

Sure, the Phillies played a very sloppy game while committing defensive errors and mental errors. On top of that, they lost their centerfielder, Roman Quinn, who jawed with the homeplate ump on a pitch that was clearly a strike 3, and he got ejected. On the same play, Phillies’ manager Joe Girardi got an early shower.

What the Nats did by handing the Phillies a loss is that it possibly pushed them out of the playoff picture today if the Giants win — the Phillies move to 9th place and out of the postseason picture with six games remaining.

On top of that, Phillies starter Zack Wheeler on the final pitch of his outing plunked Carter Kieboom on the lower wrist with a 95.2 mph fastball. Kieboom immediately exited the game and headed straight to the x-ray room.

Preliminary good news, Carter Kieboom has a bone contusion according to the X-rays which were negative.

The Nationals got plenty of offense tonight, and the offensive star was Asdrubal Cabrera who had a 2-3 night with 2 runs scores and an RBI. Brock Holt also had  hits and continues to stay hot for the Nats. Every Nats starter reached base safely in this game, and the cold weather cost the Nats a few home runs as they barreled up a few that were caught in front of the wall. No ball left the yard tonight.