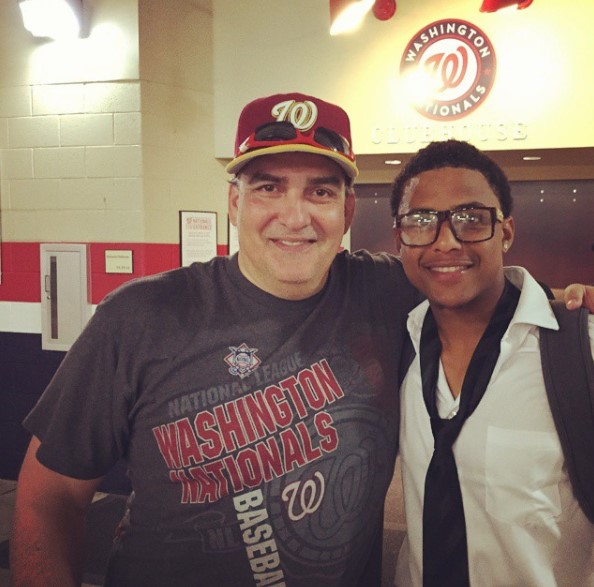 In the middle of a season, an MLB debut is usually a spur of the moment callup caused by an injury or a demotion. Some debuts are a factor of making the Opening Day roster like Jake Noll, and others come the way of a September callup like Ryan Zimmerman back in 2005. In the last two days of baseball, the Nats have debuted Seth Romero, Dakota Bacus, and Luis Garcia, and none of those players in that trio had family, agents, friends, or a significant-other to watch their debut in-person.

Even before the Minor Leagues were formed in 1901, there were independent leagues where Major League teams pulled players from. Now, COVID-19 has single-handedly robbed players of the century-old tradition of making a big deal about debuts. Who could forget the elation from Carter Kieboom‘s family shown on MASN while they celebrated Carter’s debut last year.

The reaction from Carter’s family is incredible too. That was a special moment. pic.twitter.com/IIl0TglgrM

Those are the moments that you want for each player. When Jayson Werth injured his wrist in May of 2015, it was Wilmer Difo who got the call to replace him on the roster. Difo called his family in the Dominican Republic, and there was not enough time to get them to fly in to see him. But Difo still had a relative from New York who made it to his debut at Nats Park. The youngster sent out a group text to host families from his Minor League years at Auburn, Hagerstown, and Woodbridge and others who he was close to in those cities like Sean Guy got a text. Guy owns an antique store in Hagerstown and has been a major supporter of players in their system. Sean called me to invite me to be his “plus one” to Difo’s debut. We headed to the dugout before the game and Guy and Difo shared hugs and tears. Later in the game Difo pinch-hit against the Yankees’ David Carpenter and smacked a line drive to centerfield for his first hit. After the game, we met Difo at the door leading to the clubhouse. It was special. It was emotional.

For Corey Brown, he was Mr. Oklahoma as the top amateur baseball player in the state, and a first round pick by the Oakland A’s in 2007. Injuries derailed him from top prospect with five tools to a player who fell off of the rankings. In 2010, he was in the Henry Rodriguez deal for Josh Willingham. A year later he was a September call-up. His high school baseball coach, his girlfriend, family, and his agent Tom O’Connell were in attendance for his debut. I was invited as a “plus one” with his agent and the celebration spilled over to The Palm in D.C. to mark the moment. What a great time to be part of that.

Luis Garcia made his debut yesterday, and what a debut it was. He went 2-5 with a double and two runs driven in. He had a close family friend who tried desperately to get into the Hilton hotel that looks on to Camden Yards to see the debut as that was the only way to do it legally. But the Hilton is closed due to COVID. His friend did not get any closer than to the gates to the stadium which were locked.

This is as close as Luis Garcia‘s family friend got to see his debut tonight. 💔 pic.twitter.com/qoLaaII9GN

Not everyone is as fortunate as former Nats pitcher Mike O’Connor who grew up in the D.C. area, but there was a twist — his debut was going to be in St. Louis on April 27, 2006 and not in D.C.  For O’Connor, he was going up against the mighty Cardinals on their home turf in front of a packed house. You know, those Cards with Albert Pujols, Jim Edmonds, Yadier Molina, and others.

O’Connor was called up from the Nats’ Triple-A New Orleans and the team optioned Billy Traber back to New Orleans. For O’Connor, he actually knew two days before his debut that he was going to the ‘bigs’ and, he remembers everything vividly when was told by Tim Foli and Steve McCatty who were his manager and pitching coach in Triple-A at the time. The O’Connor entourage for his debut was a large traveling party consisting of his parents, brother, girlfriend (now wife), girlfriend’s dad, two friends from high school, and his coach from college who had all flown to St. Louis for the debut. A day they will never forget.

“It sucks for players today in these debuts,” O’Connor said. “For player’s families it has to be tough especially those who have been their support through the years to get to this point. I feel for them as I know what it meant to my family to have them for my debut.”

How was O’Connor’s nerves during his debut?

“I was nervous at first [during my debut], and when I got the first out I settled down,” said O’Connor who walked David Eckstein to start his debut and two batters later got Pujols to flyout in a 5.0 inning 0.00 ERA debut. “I was good enough (laughing) that they kept me up.”

O’Connor pointed-out an issue back then that MLB baseballs had higher laces than the Triple-A balls which has since been corrected. It gave the ball a different feel and it just added to the adjustments in a debut he told me.

Some players struggle some with their nerves and emotions as Seth Romero talked about in his up and down debut where he K’d four batters in the five outs he recorded, but surrendered a grand slam to Tomas Nido of the Mets to put a damper on his 21.6 K/9.

“I was 100 percent nervous for the first one,” Romero said after his debut. “But after the first few throws I kind of settled in. Right off the grip, yeah for sure, definitely nervous.”

For Romero, he was a first-round pick in 2017 and after a 2018 successful TJ surgery on his left elbow UCL, it was a matter of time for his debut given his pedigree as a top prospect just like Luis Garcia. The same cannot be said for Bacus.

Who can forget the movie The Rookie which was based on a true story about reliever Jim Morris who debuted at almost 36 years old. There are not many players making debuts at nearly 30 years old and Dakota Bacus made his debut just 231 days short of his 30th birthday. You also won’t find many players who keep going for parts of nine seasons in the minor leagues like Bacus and add to it his time at Indiana State University before that. He persevered and it finally happened.

“If it happens, it happens,” Bacus said last year to Jeff Wendland a sports reporter for Dispatch-Argus. “I’ve been around long enough to know how it works in this game. I believe I belong and I have a lot of people — including the guys on my team — who tell me I should be in Washington, but that’s not how it works.”

Yes, it works differently for each situation. Finally. Bacus also knew the normal path to the Majors is an injury or demotion, and sure enough after his years of waiting — that is exactly how he got his promotion.

“I would never wish anyone to be released or get injured,” Bacus continued. “There is only so much I can control, and that right now is me pitching well for my [minor league team] and waiting for my time.”

Bacus had a solid season for Triple-A Fresno last year pitching to a 3.58 ERA as a closer in a league where the ball flies in the higher altitudes of the Pacific Coast League (PCL). There were other years that Bacus showed promise as a prospect, but the call never came. He stuck with it at a time he saw younger teammates hang it up. Making the 60-man player pool was a great first step, but he was probably five or six players back on the depth chart as a right-handed pitcher. Then the call he had waited for came from Randy Knorr and pitching coach Brad Holman who were his manager and pitching coach at Fresno last year.

“Yesterday was obviously a very emotional day with Dakota’s callup,” his uncle Jim Garrett told me. “I remember when Dakota was a senior in high school, and a Tampa Bay scout saw him and you think he may be something. It is a rollercoaster and I flew out to Oregon in 2012 to see him pitch in a 1st round NCAA baseball playoffs and he pitched the first game and he went up against Cal State Fullerton and they were talking about him being a second draft pick. Next step he did get drafted but it was the ninth round. He signed his contract in my office. I remember him striking out Byron Buxton in his (Minor League) debut in 2012. All of this went through my head yesterday recalling everything including his struggles which shaped him to who he is.”

Unfortunately, Dakota’s fiancé, daughter, Uncle Jim, other family and friends could not attend his debut in which he threw 2.0 perfect innings in relief yesterday. Literally, they had waited years for that day, and his Uncle Jim who traveled the county to see him pitch as a kid got shutout.

“Dakota called me two times yesterday and I didn’t accept his call because I was working,” Uncle Jim continued. “He called again and I knew it in his voice, I said, ‘NO WAY’. He said, ‘I’m going to the bigs’. I could hear the emotion in his voice. I told him I love him. I said,  ‘Just be you. The slider got you there. That’s your money pitch.’ I wish I was there in-person to see it.”

COVID has changed many lives, and in this case changed a tradition. High School seniors missed their proms, people have cancelled weddings, lives have been ruined by the virus, so while missing a debut in-person might not seem like a big deal to some — but it still is a shame in the long tradition of baseball.