Game #16 for the Nats is packed with roster moves and issues with the starting rotation! 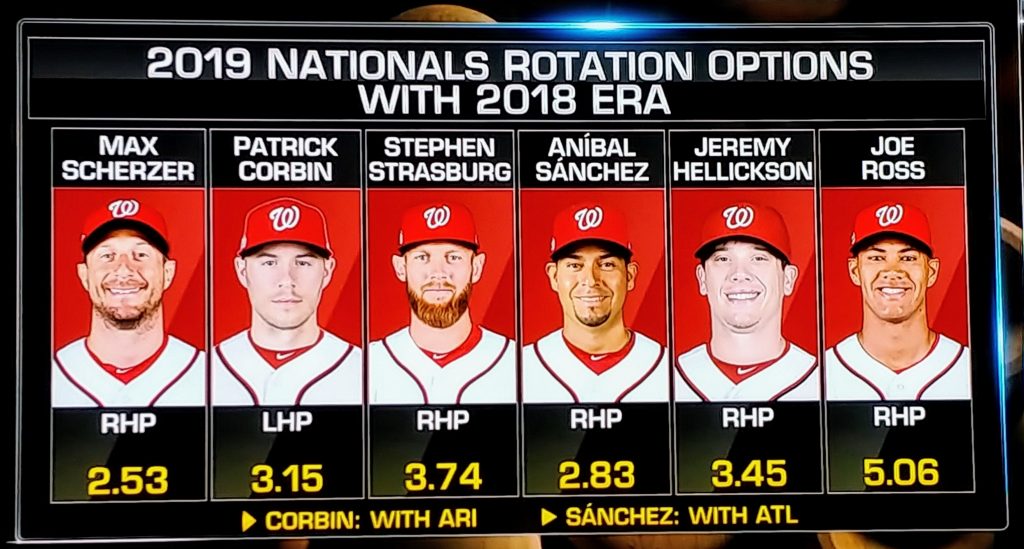 Joe Ross opted-out and Jeremy Hellickson retired. What is left from the World Series season is some legitimate age-regression and injury concerns; MLB Network graphic

There were already going to be roster moves today as Will Harris pitched on Tuesday in a sim practice, and was re-evaluated yesterday. If he felt ready to go, Harris would be activated from the 10-day IL to the roster —  and it is now official. With Harris back, the Nationals had to make a roster another move to make room on the roster, and it was not the move that was anticipated in discussions yesterday. Last night, lefty reliever Sam Freeman suffered an arm injury, and Harris took his spot as Freeman was moved to the 10-day IL for now. The Nats no longer have a “Hi Lev” left-handed bullpen arm because of the ineffectiveness of Sean Doolittle. The Nats already lost lefty Roenis Elias to an injury a couple of weeks ago, and now are down to four unproven lefties who are not on the 40-man roster.  Seth Romero is with the team on the taxi squad, and is is part of that quartet of lefties that includes Ben Braymer, Nick Wells, and Matt Cronin who are all down on the farm in Fredericksburg, Virginia at the Alternate Training Site.

The bigger issue is the health and status of Max Scherzer, Stephen Strasburg, and Anibal Sanchez. Maybe the good news is that Scherzer looked great after suffering a “tweak” of his hamstring in a start last week. Strasburg returned for his 2020 debut over the weekend, but admitted that he still felt the pain from the nerve impingement in his right wrist/hand during his last start. Strasburg continued pitching anyway and gave up 5-runs in the fifth inning before he was pulled. Anibal Sanchez threw three stinkers in a row and has only logged 13.0 innings this season with an awful 9.69 ERA and three costly losses. Sanchez is back to being an automatic loss like he was in most of 2017 and statistically speaking is even worse this year. His mechanics are mess as we wrote about yesterday.

Just with Sanchez’s three losses and Doolittle’s two blowups that led to losses, the Nats 8 losses on the season can be analytically traced back to 5 losses to those two players, and if that suspended game against the Orioles turns to an “L” that will go on Strasburg’s record. Of course you could debate cause and effect as to these are all team losses, but pitchers get paid the big bucks because the shoulder the greatest responsibility for outcomes of games.

Martinez has already indicated that they will use Doolittle in low leverage spots, but you cannot hide a starter like Anibal Sanchez who is already penciled in to start on Monday in Atlanta against the Braves to start that crucial 3-game series.

Rizzo has defended struggling players in the past saying they will get back to the stats on the back of their baseball card.

“If you give good players enough chances, water seeks its level,” Rizzo said before. “That’s why they call ’em ‘averages.’ ”

While Rizzo has had to say that many times in his tenure as GM because veteran players falter at times — and guess what, they don’t always get back to the stats on the back of their baseball cards. Injuries and age regression will change everything, and sometimes the player was never good enough. Sticking with mistakes has cost Rizzo before as we saw with Danny Espinosa and Matt Wieters. It goes even further with the use and usage of players like Gio Gonzalez. Rizzo has a habit of just riding it out to the end of the player’s contract instead of cutting bait and moving on. Sometimes Rizzo’s loyalties to a struggling veteran has paid-off, but many times it has not.

In 2019, you saw players like Asdrubal Cabrera, Fernando Rodney, and Gerardo Parra who were all DFA’d veterans, and they chose the Washington Nationals and in large part they chose Mike Rizzo. Cabrera who was cut loose from Texas spoke to the many suitors he had, and he returned to the Nats this year on a new contract. Rizzo has made Washington a destination for veterans who want to be treated fairly. Usually they get a lot more rope than other teams will give them. It did not work-out last year for Trevor Rosenthal, but the process of adding talent to a roster is not perfect, and it is far from easy.

GM’s are usually judged by the results and not the process. There is no WAR for GMs or  a credible way to judge them on dollars per wins. Mike Rizzo will always have his 2019 World Series championship. Everything is in perpetual motion, and he said earlier in the week he is concentrating on winning another championship. As he has found, injuries do not stop even with the best laid plans.

After Victor Robles was hit on the knuckles of his right-hand on a pitch yesterday, he exited the game and x-rays were negative. He will sit today to rest the hand and replaced by Michael A. Taylor.

The Washington Nationals selected the contract of left-handed pitcher Seth Romero and placed left-handed pitcher Sean Doolittle on the 10-day Injured List (retroactive to Aug. 11) with right knee fatigue. This happened about an hour before first pitch was scheduled. Now you have ponder the timing of the move, and why it was not done earlier and before Davey Martinez’s pre-game presser. Source tells us that the team needed a doctor to see Doolittle, but certainly the timing was odd.

Nationals lineup for the series finale in CitiField (weather permitting):