Game #13 exposes what has gone wrong and right so far; Nats have first game away from Nats Park! 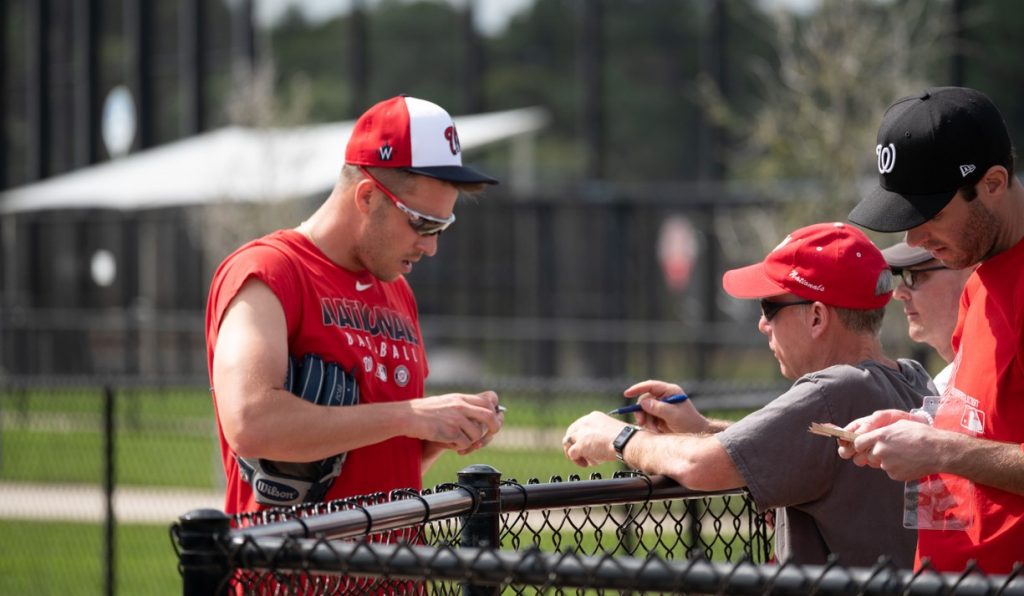 Does it feel like the Nats are still in Spring Training mode? It feels like a lack of urgency. Using the struggling Sean Doolittle in a key spot on Saturday was a flashback to Doolittle on August 9th to August 17th last year when Doo gave up 10-runs in 4.0 innings. The Nats shut him down the next day and placed the closer on the 10-day IL with right knee tendonitis listed as the cause. He returned in September with a fresh arm and was one of the stars the rest of the way and through the World Series. Yes, the Nats and Doolittle have little time to figure out what is wrong with the 2020 version.

There is also that tug-of-war with the starters. Hooking pitchers like Austin Voth and Erick Fedde too quick and allowing Anibal Sanchez and Stephen Strasburg to self-destruct on the mound has been emblematic of the issues to date. To a lesser extent, late inning matchups are not being taken advantage of in a sabremetrics sense with pinch-hitters where key at-bats have gone to fails in situational hitting. All of this has led to a 4-7 record with a 3-run deficit in a suspended game against the Orioles that could make the team 4-8.

Sure, a 7-game winning streak cures all ills, but the team has lacked that jolt of energy where all of the men are rowing together. The calamity of unrolling the tarp to cover the field yesterday seems to have encapsulated the whole season into one image that this team has the right parts but must push together in the same direction to work properly.

Statistics only tell part of the story — the eye test tells the rest. There is little time to figure this out as if it is March in West Palm Beach. There has to be more urgency.

Yes, the Washington Nationals are in last place in the NL East. They have a -14 run differential which tells you this is no fluke. When they cleaned up the defense and baserunning, the issue magnified that there was a lack of clutch hitting, and seemingly one blowup inning of pitching in each game that went awry for this team that seems to be playing with zero margin for error.

Strasburg has a point, but baseball measures wins and losses by the final score not by the 80/20 rule. Strasburg was shutout good in 4/5th of his outing and that 5th inning unraveled to where a 0-0 game turned to a 5-0 deficit. It has been the issue with most of the losses in 2020. While Strasburg needed the work on the mound, that 5-run outburst counted in the real stats. The World Series MVP could have finished his work at the indoor pitching mound, but instead he self-destructed on the mound as he hit that proverbial wall. It was painful to watch. A fantastic 4.0 inning performance was overshadowed by the negatives.

“We have to play better baseball, and I think the best days of baseball are ahead of us,” general manager Mike Rizzo said yesterday.

We hope you are right Mr. Rizzo. If for nothing else, play for pride. With the lineup, it feels like the 20/80 rule. Sure, Starlin Castro and Juan Soto have looked great. But what about the other seven in the daily lineup? The Nats World Series hero, Howie Kendrick, is batting .111 this season in RISP spots (1-11) and .276 overall. Most of the team has been awful in RISP like Trea Turner who is 0-6, and Michael Taylor is 0-4. Overall the team is at .232 in RISP spots. One clear fact is that scoring 2.9 runs per game won’t cut it.

If we had to pick the three standouts so far during this season, it would be Tanner Rainey, Starlin Castro, and Austin Voth. Honorable mention to Juan Soto who has only played in four games so far.

The Nats find themselves in unfamiliar territory. They are in last place and also in another ballpark for the first time this season, and depending on a “Back to the Future” situation they are also either on a four-game losing streak or ended that with a comeback win after yesterday’s suspended game is finalized on Friday.

On the mound tonight is a battle of the lefties. Patrick Corbin goes up against Steven Matz. Both teams are familiar with each other and this is the first of four games in CitiField. Does this remind you of anything? The Mets hope it is a case of déjà vu like that May 20th to 23rd series last year when they swept the Nats and sent the team to 19-31. Well, guess what, if the Nats get swept in this series and using that 2.7 multiplier, you almost have those 31 losses. The Nats need to change their future and not repeat the past.