Last year, it looked like the Yankees and Nationals could face each other in the World Series as a real possibility. On October 18th of 2019, the Yankees forced a Game #6 in the ALCS as the Nationals had already swept the Cardinals in the NLCS and lied in wait to see who they would face in the World Series. Sports write themselves from reality and it did not happen, but the MLB schedulers took the best matchup of the Eastern region of the ten teams from the NL East and AL East and got smart and went Yankees and Nationals to open the 2020 revised and truncated season instead of the tired matchup of the Yankees and Red Sox. While ratings were at an all-time high for a regular season Nats game on Thursday’s ESPN opener, it was painful for Nats fans to listen to Alex Rodriguez call the game just like yesterday’s FOX game with Joe Buck and John Smoltz.

Finally, those with the DC regional sports cable package can watch F.P. Santangelo and Bob Carpenter call the game instead of watching it on TBS. Yes, MLB’s top three national network partners, ESPN, FOX and TBS all got a game in this coveted series to broadcast, yet, Nats fans were treated once again like second-class citizens by the national networks. The Nationals are the reigning World Series champs, yet, you would never know it if you were a casual observer. It was Yankees on overload. They could not stop salivating over Giancarlo Stanton‘s tape measure blasts, but barely any emotion when Michael A. Taylor hit one on a blast that bounced onto the concourse or Victor Robles who had 4 RBIs in the game and along with Asdrubal Cabrera‘s 2 ribs matched the total run output of the Yankees in the first two games.

Yes, it is all about ‘show’ and it is evident. You have to think that the Nationals radio team of Charlie Slowes and Dave Jageler hit regular season records for listeners as Nats fans muted the ESPN and FOX broadcasts like we did. If you listened to Buck and Smoltz at all, they basically gave the Nats no chance with Erick Fedde on the mound as a spot starter when Stephen Strasburg was scratched. Imagine that. Nats fans heard that all before from those two during the entire World Series of 2019.

The next time you see the Nats and Yankees match-up will either be in the World Series or next season in a Spring Training game but we know that the schedulers have the Yankees and Nats in inter-league for the 2021 regular season.

Also, if you believed the media or Patrick Corbin‘s brother, Kevin, in his best-man’s speech at Patrick and Jen’s wedding, the younger Corbin was donning a Yankees cap, and wishing his way that his big brother should have been pitching for the Yankees, but thanks to the Lerner ownership group out-spending the Yankees and Phillies for Corbin’s services, he became a Nat and a World Series champ. 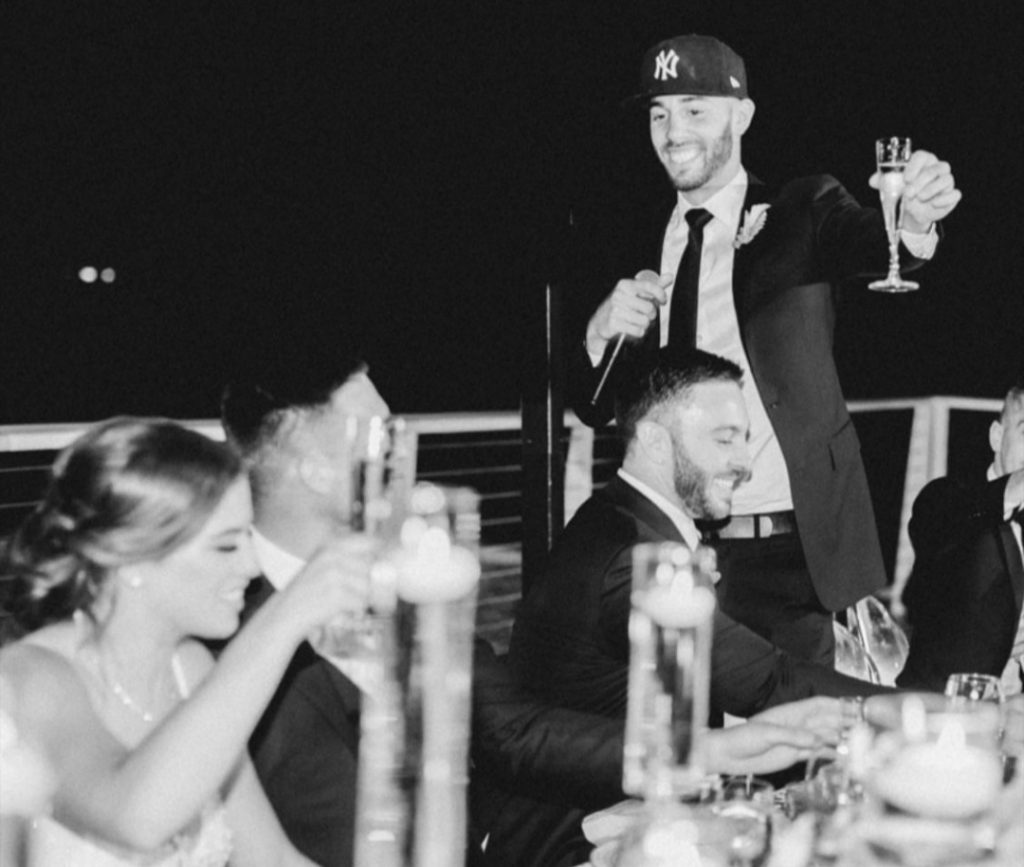 Today, you get to see Corbin on the mound for the first-time as a Washington Nationals player facing his favorite team from his youth. You have to think that Kevin Corbin is a die-hard Nats fan now.

The Yankees will be pitching a bullpen game and will start righty Jonathan Loaisiga. Before the game, the Yankees optioned OF Clint Frazier and RHP Ben Heller to their Alternate Training Site and recalled RHP Brooks Kriske and RHP Nick Nelson.

As far as the Nats go, there was a rumor that they were going to activate a new signing with Josh Harrison but that did not happen, so stay tuned on this. Also, there continues to me more confusion about re-tests of COVID for Juan Soto who might have had a false positive on a Tuesday test that made him ineligible to play on Opening Day and yesterday and again today.

Something isn’t adding up here:

Are we to believe that Soto’s Thursday test wasn’t sent to the MLB lab when “EVERYONE WITH THE NATIONALS WHO TESTED THURSDAY RECEIVED A LAB-CONFIRMED NEGATIVE RESULT”.

Something isn’t adding up. https://t.co/9Ui20niQW1

We made the first report that Soto got a negative test result back yesterday, but then news came that test was from an ‘independent lab.’ Huh, what? What happened to Soto’s team test that goes to the MLB lab?

Source: Juan Soto’s test was negative giving more support to the theory that he received a false negative on Thursday. #Nats

See that World Series patch on our sleeves?

We got it because World Series champion Patrick Corbin shoved for 3 innings in relief in his last appearance.#PattyIce // #NATITUDE pic.twitter.com/vq2yoLrPn9