The mock drafts got it wrong again; Cade Cavalli to the #Nats in the 1st round! 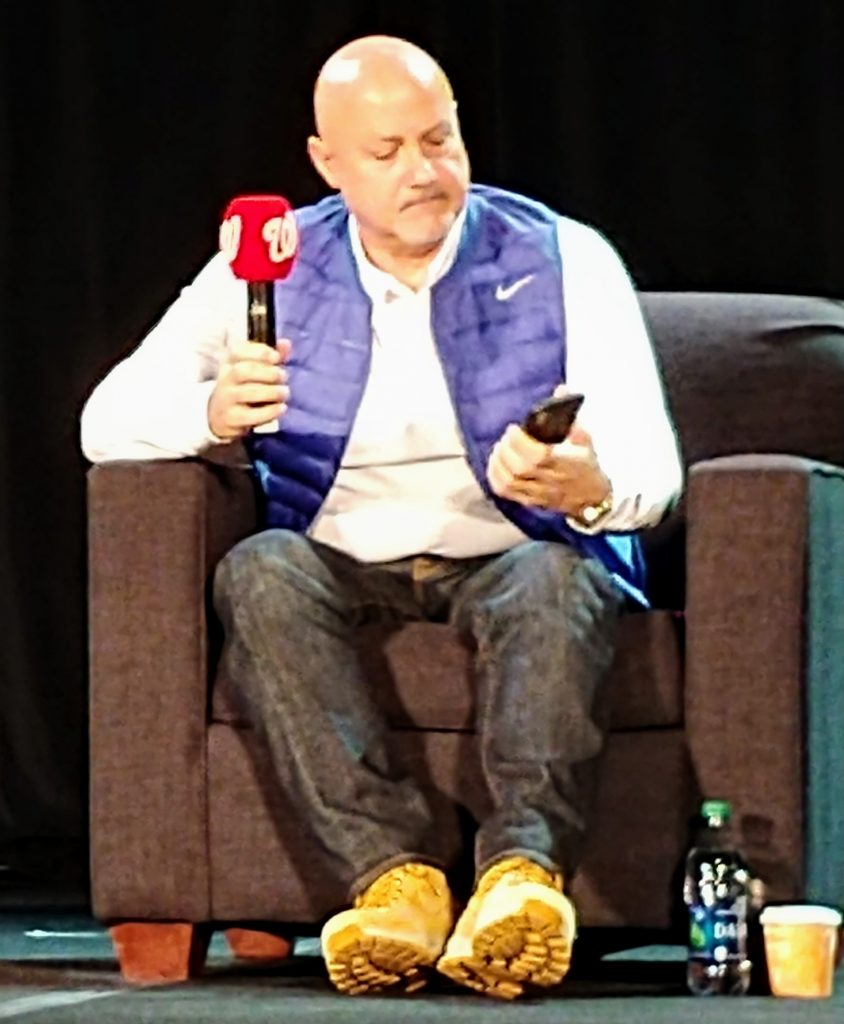 The draft is so hit-or-miss like a deceptive breaking pitch that will buckle your knees when you were looking fastball. Every draft class can be analyzed in hindsight years down the road to look at names of “can’t miss” first round picks who never made it. We discussed the 2009 draft class of swing-and-misses on Dustin Ackley, Donavan Tate, and Matt Hobgood. Possibly the greatest baseball player ever came out of that 2009 draft at pick #25 and his name is Mike Trout. Sure, Stephen Strasburg was in that draft and the falloff after him is tremendous in the WAR department. Only Trout and Stras have career WARs over 20.0 from that draft class. But why did so many fail? There were toolsy position players and big arms and failures all over that page. This 2020 draft in ten years will have plenty of winners and losers, and it just is the way it is in baseball. The best GMs find the winners, but luck has to be a factor also. You can’t pick a player who already came off of the board. With pick #22, the Washington Nationals chose RHP Cade Cavalli from the University of Oklahoma. 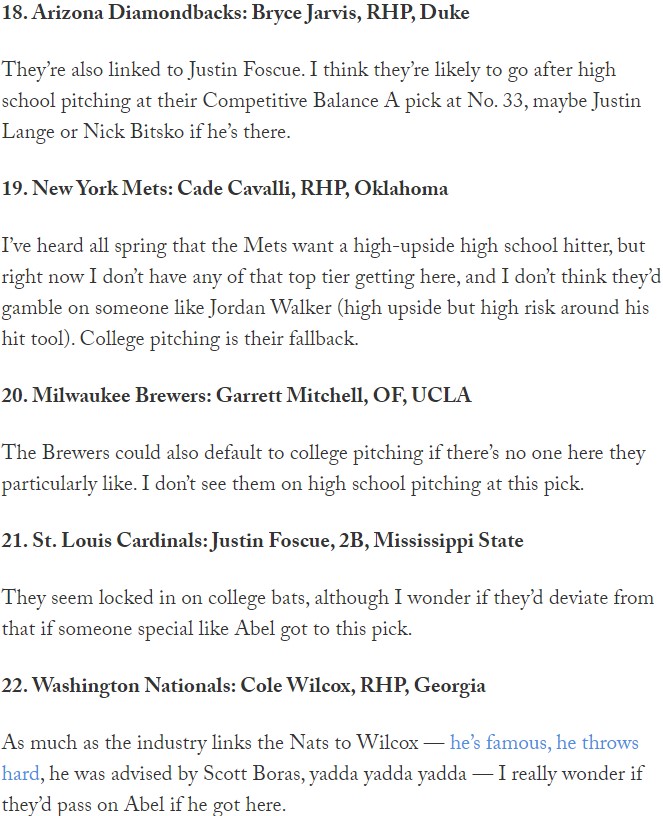 Mock draft projections are about as reliable as your NCAA tourney brackets when you have one miss of a top seed. Once the Orioles selected Law’s No. 11 prospect, Arkansas outfielder Heston Kjerstad, with the No. 2 pick, it was over in busted “mocks”. Law had the Mets taking Cade Cavalli with the No. 19 pick, and our inside source said the Nats were not going to take Cole Wilcox in the first round and would consider Mick Abel, Bryce Jarvis, and Cavalli while another told me if they go with a position player it would be Tyler Soderstrom. Of course Mike Rizzo went “pitcher”, but this pitcher is a converted first baseman who bashed ten home runs.  As it happened, Abel and Jarvis came off the board before Cavalli who was there for Mike Rizzo. The hope is that Cavalli will be as valuable as other pick 22’s like Craig Biggio, Bruce Hurst, Marcus Stroman or Jayson Werth. There’s been fourteen picks at No. 22 who had over 10.0+ WAR in their careers.

The 6-foot-4, 226-pound righty has an overhand delivery that the Nats could tinker with if they want. His size and shape compares to Jonathan Papelbon, but the arsenal is quite different as Cavalli who was also a first baseman for Oklahoma has an assortment of pitches like Jordan Zimmerman with the sizzling fastball (two-seam and four-seam), slider, spiked curveball, and his changeup is a work-in-progress. He will also reachback for some octane on his four-seamer and ramp it up to 98, and he averaged 95.2 on his velo. The changeup is his go-to against lefties. He called his own pitches in college which was unusual.

“The Nationals took a very Nationals player in Cade Cavalli, a big, hard-throwing college pitcher from Oklahoma who should have been long gone but slipped a little as teams asked why he hasn’t missed more bats with such premium stuff,” Law wrote. “He’s a great athlete and hasn’t been a full-time pitcher for that long, so while there’s reliever risk, he has rotation potential.”

Law brought up a point about Cavalli needing some more swing and miss stuff, but his K/9 in the abbreviated 2020  season was excellent with striking out 37 batters in 23⅔ innings over four starts. His walk rate was low (5 overall), and he showed good command.  Maybe he needs more deception from his over the top delivery as the batters usually see the ball better, but it could also be a function of spin rate and late break on the slider and curveball. Remember, Jordan Zimmermann didn’t have classic swing and miss stuff and became a two-time All-Star.

In the media swarm afterwards, you could see that Cavalli handles himself well in interviews and in his social media posts.

“It was awesome,” Cavalli said when he was drafted. “I was grateful to even have my name called. You’ve got to keep a really good perspective. There’s mock drafts where they put you in — wherever, they said I slid, or whatever, but I know I ended up in the right place, the right organization, and I know it’s in God’s hands, I’m going to be around great people, great organization, I can’t be happier.”

If you went by Keith Law or to MLB.com’s Jim Callis and Jonathan Mayo, their last mock drafts had Cade Cavalli going at pick No. 12 to the Reds in the first round. The shocker to many is that general manager Mike Rizzo passed up on Cole Wilcox who slid in the draft and was not even picked in the first round, and that was very reminiscent of Matt Allan in last year’s draft. But question swirled about Cavalli’s medical history of back pain and a stress reaction in his arm. For Wilcox, who knows what happened there. Cavalli is thrilled with his pick by the Nats.

“I don’t think my medical [history] had anything to do with my pick,” Cavalli said about sliding to the Nats at No. 22.

This also was not Rizzo’s first pick out of the state of Oklahoma as Koda Glover was an Oklahoma State product. The last impact University of Oklahoma product drafted was Kyler Murray who chose football, and the last impact pitcher from there was Jon Gray. Of course there was Bobby Witt, Russ Ortiz, Garrett Richards, and Mark Redman too.

With no minor league season looming, we will see what the Nats do with Cavalli. There is also the question of what Rizzo and the Nats pay him. With so much talent still available, the Nats could go for first round talent in the latter rounds like they did with Jesus Luzardo a few years ago. This year, the Nats pool for spending is set at $6,647,700 and $3,027,000 slotted for their first selection — but they could get creative with their picks to do what the Mets did with Allan last year.

The one piece of trivia about Cavalli is that he is an accomplished barber with his own Instagram account dedicated to his coiffing hair.

Coverage of Day 2 of the Draft begins today at 4 p.m. ET with MLB Network’s preview show. The Draft resumes with the start of the second round at 5 p.m. ET on MLB Network and ESPN2, plus live streaming online at MLB.com.

“I ended up with the best organization out there and I’m fired up.”