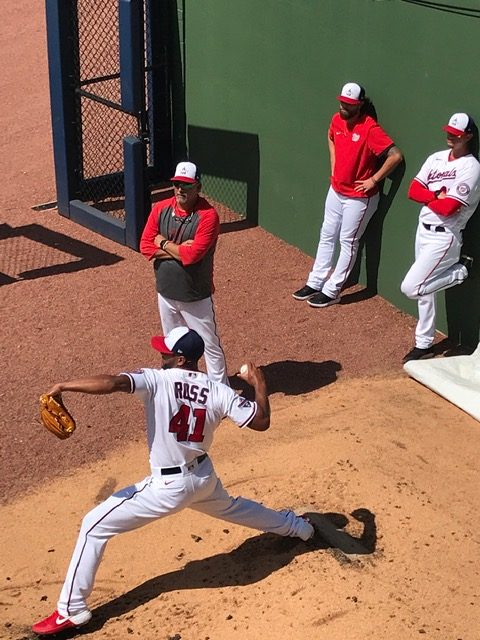 Signs in baseball are usually thought of as the sign language used by catchers and pitchers in communicating a pitch call. That system has been used for nearly four score and seven years. Simply one finger down is the fastball with a location signaled after that, but over the years teams have rolled-out electronic and intricate means of sign stealing like espionage. As the story goes, the Nats were tipped off before the World Series that the Astros were still stealing signs.

This story still has legs, and it seems that every time a Nats pitcher or catcher does an interview they are asked about the sign stealing. Back-end reliever Sean Doolittle appeared on Talkin’ Baseball’s YouTube channel and spoke in detail about how the Nats attempted to thwart the sign stealing.  The one-hour and forty-five minute chat also covered Doolittle’s thoughts on bullpen roles in the future, the “Soto shuffle”, clubhouse celebrations (conga lines), swag and dorks, Max Scherzer‘s time in the bullpen, and pitch analytics.

Remember, the Nats counter-measures to sign stealing were put in place before the Astros sign stealing scheme became public in The Athletic.

“It’s the worst feeling in the world stepping on that mound and having an idea that that hitter knows what’s coming,” said Menhart to Svrluga. “It’s one of the most unnerving feelings. You feel helpless. You just get ticked off to the point where you lose total focus and confidence. So we had to make sure our pitchers didn’t think about it. We had to eliminate the possibility.”

Here’s Barry Svrluga with the details:

There were some layers to the Nats’ plan for Houston. First, each pitcher had to have his own set of signs, and catchers Yan Gomes and Kurt Suzuki had to be familiar with each one. So the staff printed out cards with the codes and had them laminated. The catchers could have them in their wristbands, a la an NFL quarterback with play calls strapped to his forearm, and the pitchers would have them in their caps. Each pitcher had five sets of signs, and they could change them from game to game — or even batter to batter, if necessary. Using the set labeled No. 2, but worried the Astros were catching on? The pitcher could signal to the catcher to move to set No. 3.

The Nationals won the World Series and even if their efforts of using up to five sets of signs were stolen; there were still times that Stephen Strasburg was either tipping pitches or the Astros knew the signs. That became a key part of Game 6 when a Nats scout, Jonathan Tosches, relayed to pitching coach Paul Menhart that he saw Stras tipping pitches.

Many times the credit goes to the hitter. Look at Howie Kendrick‘s dramatic World Series winning home run against Will Harris. It was a nasty low and away cutter that Kendrick got enough barrel on to clank it off the opposite field foul pole.

Last night, Patrick Corbin did an AMA for Bleacher Report. Of course he was asked several times about sign stealing.

“We didn’t know what they were doing but we knew they were trying to get an advantage,” Corbin said in the AMA. “Sign stealing has been a part of the game forever. We all had a little card in our hat with  5 different signs where we could mix them up. It’s such an advantage to know which pitch is coming. It’s difficult when you know [the other team] has that advantage.”

For Doolittle, he threw 90.8% fastballs in 2019, but throwing the occasional changeup was still a pitch that they would not want the hitter know it was coming. Doolittle said he had five different sets of signs and had a “panic attack” over this.

“I got together with Yan and Zuk and we came up with five sign sequences that I was comfortable using,” Doolittle said on the YouTube interview. “I would come out of the bullpen and when Davey would come to make the pitching change he would bring my card with my five sign sequences on it and give it to the catcher. It was Yan in game one I think. He would give Yan the card and he would slide it into his wristband.”

They would agree on the mound which sequence to begin with. Doolittle also said the Astros were doing mental math and possibly putting up signals on the scoreboard along with tapping. It certainly sounds like the Astros were still doing some cheating but commissioner Rob Manfred found no proof of that in the investigation of the 2019 season.

Of course at Spring Training there was the incident of signs being confiscated with disparaging messages about the Astros. Some signs are not allowed it would seem.

In unrelated sign news, we found some irony in these signs about Bryce Harper as we have been chronologically watching all of the Nats wins from the 2019 season. With the Nats behind five runs, this fan in the tweet was waving his sign while the Phillies faithful were celebrating in the seventh inning with a wave. The Nats clawed back to win in extra innings. When the Nats tied the game in the ninth inning you can see the sign guy tuck his sign away.

Signs signs everywhere are signs. You got Bryce and we got Patrick Corbin, and a World Series championship! 🏆 pic.twitter.com/prWrdNta3m