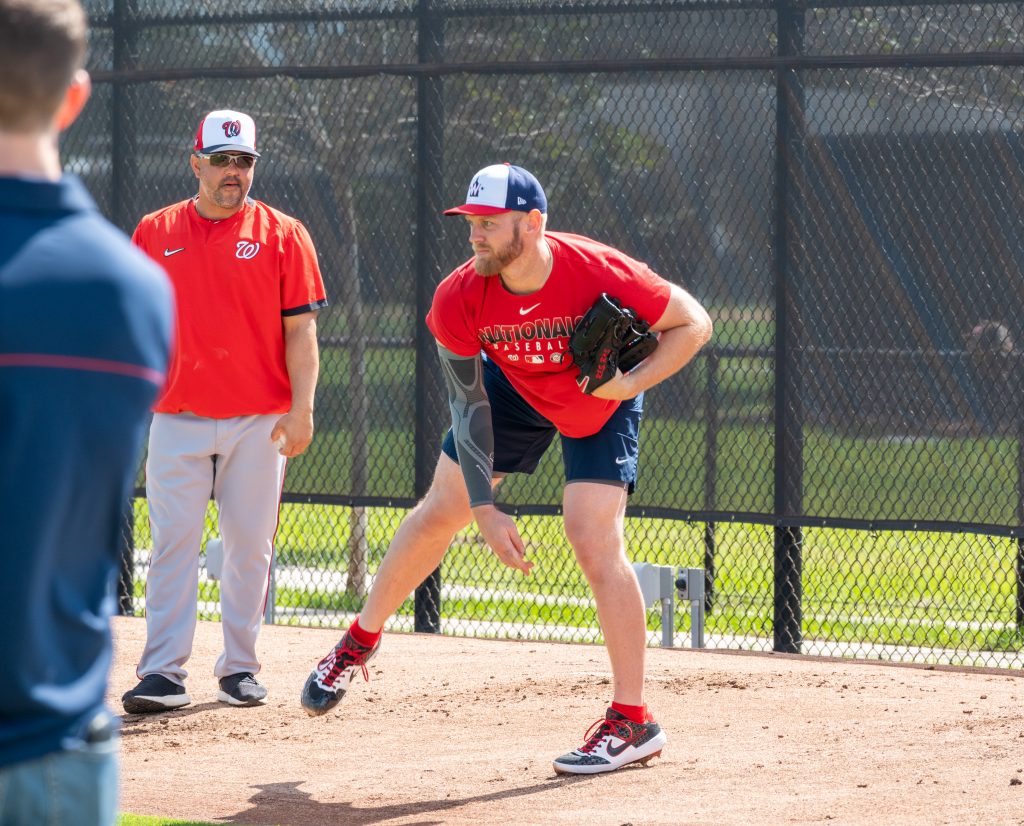 Four things you remember from this sixth World Series game was manager Dave Martinez becoming unglued after Trea Turner was ruled out for runner’s obstruction or some rule to that effect, Strasburg was told he was tipping pitches via Jonathan Tosches who is the coordinator of advanced scouting, Rendon’s big home run, and that the Nationals forced a Game 7 winner-take-all game. While we know the Nats won this game, you will get to re-live it on MASN tonight at 7 pm.

Join us for Game 6 of the World Series at 7 p.m. on MASN. pic.twitter.com/nVsjI1UWmd

If you recall, the Washington Nationals won the first two games of the series then dropped three in a row at Nationals Park to make this Game 6 an elimination game with Stephen Strasburg on the mound against Justin Verlander at Minute Maid Park in Houston.

The Nats get to play with AL rules in this game and got to go with Howie Kendrick back at the DH with Asdrubal Cabrera back at second base.

When the Nats were in another elimination game, it was Stephen Strasburg to the rescue as he went 8 1/3 innings of 2 run baseball for his 5th win (a MLB record) of the postseason and the biggest win of his career. He absolutely etched his name alongside Sandy Koufax, Mariano Rivera and Madison Bumgarner as the best postseason pitchers in MLB history as he pushed Justin Verlander to a career 0-5 in World Series games. The Nats won this one by a final score of 7-2 to even the series, and Anthony Rendon drove in 5 runs and was a triple shy of a cycle.

“Stras was doing Stras things up there,” Anthony Rendon said.

As mentioned, manager Davey Martinez went ballistic on the umpires and he was ejected which is rare in a World Series as it has not happened in 23 years when Bobby Cox was ejected in 1996.

­“I don’t necessarily want [Davey] to get thrown out, but I love it,” Turner said.

The Nats were behind 2-1 in the first inning, but then the Nats scored 6 unanswered runs. The game was close in that 7th inning at 3-2 when Turner was called out and that is when Rendon crushed a 2-run home run to almost put the game out of reach. He added two more runs on double in the 9th inning which missed being a home run by a few feet.

“I started shaking my glove so they didn’t know what I was throwing,” Strasburg said. “I thank Paul Menhart for giving me the tip.”

On most nights, that game would only be about Stephen Strasburg, and he certainly shared the player of the game award with Rendon. Of course, Adam Eaton tied the game then Juan Soto smashed an upper deck 413 footer for the game winning RBI.

What all this means is that the Washington Nationals forced a Game 7. Get ready for that game tomorrow night on MASN as the most important game in Nationals history with Max Scherzer going up against Zack Greinke.