“You never let a serious crisis go to waste. And what I mean by that it’s an opportunity to do things you think you could not do before.”

The quote is all I’ll say on politics or politicians. Lets talk about what changes you would make in the MLB rules (and more, like the schedule) if you could. But first some background.

When Ghost started this site he enlisted a few folks (like me) to get involved. Given my background in technology and analytics I focused on those two areas. At the same time a colleague and I were considering writing a book on a particular feature of SAS Software (widely used for both data management and analytics). We needed data, and lots of it, to use as the sample data for the book. I convinced my co-author that the MLB Game Day data would be exactly what we needed. Not being a baseball fan, he was initially skeptical, but after I showed him how much data there was (and how complicated it was), he bought in.

So we embarked on a very long effort with lots of twists and turns to get permission to use that data. The Game Day site says the data is free for non-commercial purposes, but a book that a software vendor is going to sell is a commercial purpose. So we needed permission. Needless to say, that never happened. So I decided that I needed to generate the data and wanted data like baseball, but not baseball. So I turned to a few folks here (Ghost of Steve M., Section222 Game7!, sjm308, Andrew Lang) for some ideas on rules changes. They made great suggestions, not all of which I could implement because I had to write programs to generate the data and some of the suggestions were great ideas, but hard to implement in the limited time available. The best part of those conversations was Deuces saying something along the lines of

I’d love to help you come up with rules for this bizarro ball game.

And of course, the name of the game became Bizarro Ball (notice it is also BB).

Here are the rules of the game we came up with (the following text is an extract from section 5.1 of an early draft of the book) that describes the rules and a bit of details about Bizarro Ball. The theme of the book is about a team of consultants (my  co-author and I) writing a Proof of Concept for the Bizarro Ball headquarters (thus the reference to users).

An Overview of Bizarro Ball 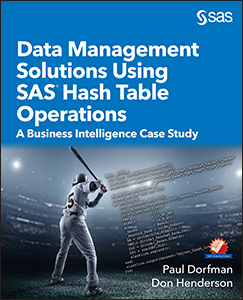 The data to be generated is for a fictitious game called Bizarro Ball. Bizarro Ball is conceptually similar to Baseball, with a few wrinkles. Our generated sample data will include data for teams, players, and games. The game data will include a row for each pitch, at bat and runner. This provides us with a rich set of data and also provides the opportunity to highlight both well known, and less known/used, capabilities of the SAS hash object.

The key features of Bizarro Ball that we agreed to implement in our programs to generate the sample data include:

The Business Users reluctantly agreed to this suggestion as they are part of the game. We pointed out that these events were not needed for the PoC and complicated the generation of the simulated data, adding that these events could certainly be included once the transactional data from real games was used once our PoC was accepted and the application was built and put into production.

Before leaving it to the TalkNats community to talk about whatever changes they would like to see, I’d like to close with a few personal notes. But first, don’t hold back on any ideas no matter how off-the-wall they are. You never know what they could lead to.