The parade had marching bands, trolleys with players, Davey with the metal, and Mike Rizzo with the belt and victory cigar! 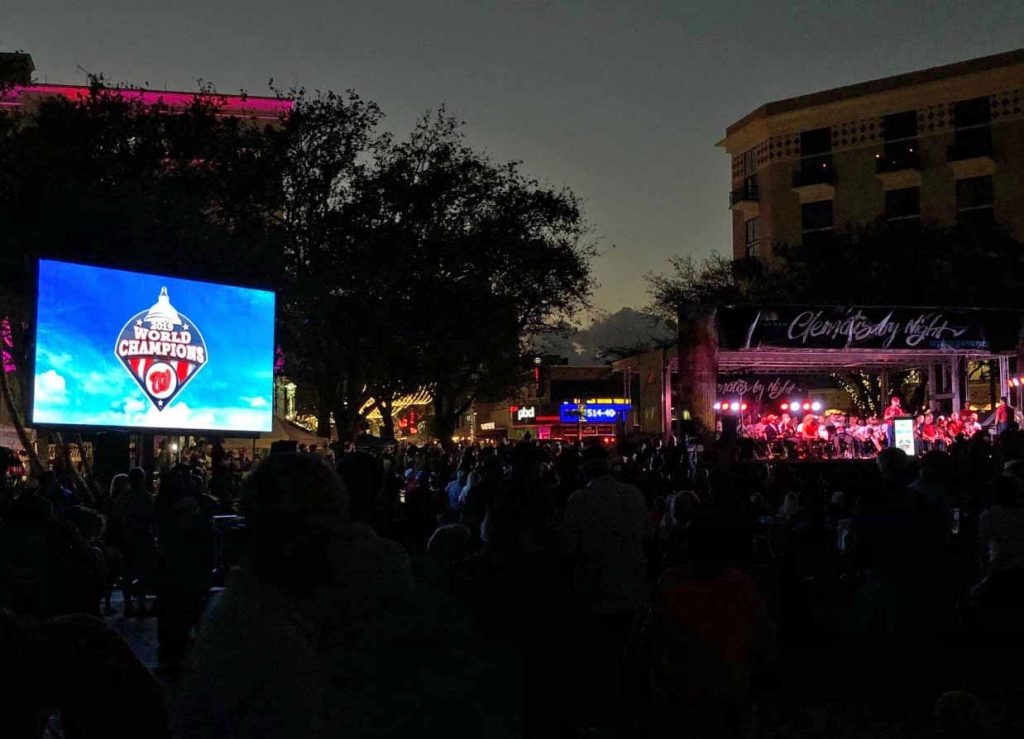 It was a legit World Series parade for the Washington Nationals that the city of West Palm Beach, Florida produced last night down on Clemantis Street in downtown. Almost all of the players were there to the surprise of many as they were transported in modern trolley cars. There was a marching band, and several convertibles with local dignatiaries as well as Nats royalty like general manager Mike Rizzo sporting a WWE victory belt and a cigar, and Dave Martinez hoisting the World Series trophy (aka Manfred’s piece of metal). One of the best parts of the parade was Anibal Sanchez using modern technology to facetime with Gerardo Parra who was enjoying the parade from 7,600 miles away in Japan at  8am in the morning. What would a World Series parade be like without some Baby Shark and some Calma, and of course you need some speeches which Davey and some of the players provided. We hope that Brian Dozier was enjoying this with his shirt off!

West Palm Beach is in the best shape of its life.#ThePalmBeaches // #NATITUDE pic.twitter.com/ZSLBF1NjRI

There were so many special moments of this parade as kids of all ages got to watch a World Series video and afterwards get their photo with the World Series commissioner’s trophy.

“What the [team] did and what we went through all year long, man. What an amazing bumpy to beautiful to whatever you want to call it,” Martinez said.  “These guys are the real deal. We are glad to be here. Thank you West Palm. Lets do it again.”

Davey changed up his victory speech a little bit, and as promised did not use the word “repeat” as he said he would not in the normal context of the baseball lexicon. Davey just speaks now about repeating the process.

ONE LAST PARADE: West Palm Beach is throwing a parade for the World Series champion #Nationals tonight and GM Mike Rizzo brought the championship belt with him! @nbcwashington pic.twitter.com/foO8HAcz4P

The general manager enjoyed himself as he borrowed Trea Turner‘s championship belt. Turner is the true local as he is from Palm Beach County and he thought Rizzo should carry the belt.

“This is an appreciation for West Palm Beach and the Palm Beaches for accepting us and embracing this team in Spring Training,” Rizzo said. “It is a well-earned parade for the people who really embraced us over the last couple of years.”