Max Scherzer has had very short offseasons before; Max will start on Saturday! 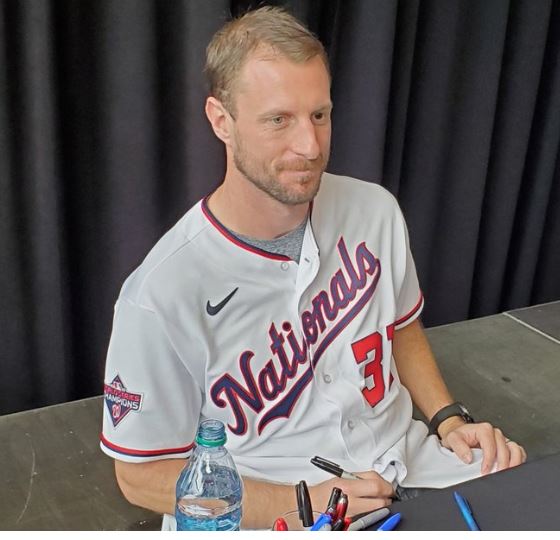 This is not the first time that Max Scherzer has had a shortened offseason due to his team’s previous years success in the postseason. When he was with the Detroit Tigers, he went to three ALCS and one World Series. After he pitched in the 2012 World Series and his team lost, Scherzer entered the following season even more motivated to move to the elite level of pitchers — and he won his first Cy Young award in 2013.  But there are some differences between then — and now. The three-time Cy winner did not pitch his first Spring Training game on February 22nd of 2013 and his first regular season start was not until April 6th of that year, and he was also a spry 28-year-old pitcher in his prime back in 2013. Baseball is cruel at times. There is age discrimination. They measure you in dog years sometimes. But if anyone can handle the rigors of a shortened offseason plus his prior year’s injury history it would be Mad Max.

When teammate Patrick Corbin was asked what exciting stuff he did in his offseason, he had nothing much except for the miniature golf course he had built in his backyard. Corbin did travel to Oklahoma to receive his Warren Spahn award as the best lefty pitcher in baseball. He did say he slept a lot. Sleep, good diet, and low stress are essential for athletes. Corbin has no children at this point to wake him up in the middle of the night, and his wife, Jen, supports his sleep schedule in the offseason. Last year they purchased their first home in Palm Beach County in Florida where this new mini golf is. He spent most of the offseason there, and worked out in Palm Beach Gardens at the new 10,000-square-foot Cressey Sports Performance elite training facility that opened in December. Cressey was previously in Jupiter, Florida and Max Scherzer has worked out with Cressey in the past as well as dozens of other elite pitchers.

For Anibal Sanchez as the elder statesmen of this starting rotation, he turns 36 next week, and we wish him a happy birthday a week early. He said he will be easing back into the the shortest offseason of his career. Given his injury history, pitching coach Paul Menhart said they will try to push him back a week.  Sanchez was Scherzer’s teammate on the Tigers in that 2012 World Series season. Back then, Opening Day was on April 1st. Now it is 5 days earlier. Everything is shortened, and Sanchez moved his offseason throwing program back to accommodate for it.

The other 30-something year old in the rotation is Stephen Strasburg, and he was the workhorse of the 2019 Nats as well as their MVP. He pitched career highs of 209.0 innings in the regular season and 36 1/3 innings in the postseason.

There is a good reason why Fangraphs is showing regression in their projections for this starting pitching staff given their ages and workloads.  They are projecting major regression in the Nats starting rotation (3.98 ERA) this season compared to last year’s 3.53 ERA which is .45 runs better than those 2020 Fangraphs projections. That is nearly a half run per game over nearly 939 innings for the season. Of course starters do not pitch all nine innings so the impact isn’t exactly a half run per game but that is still significant as it means approximately 47 runs over a full season.

“We’re talking about Max,” Martinez said about whether Scherzer would start in the Grapefruit League season opener. “He’s definitely on schedule, we’ll see. … But yeah, he’s adamant about being the first guy out there. I haven’t made that decision yet.”

That’s okay Davey because Scherzer announced that he is starting Saturday’s opener at the FITTEAM Ballpark of the Palm Beaches at 6:05 pm against the Houston Astros.

Maybe the good news for Max Scherzer was his lighter load in 2019. He only pitched 172 innings during the regular season, and 30 in the postseason. Maybe this is also where age is a plus in knowing what to expect. Fangraphs of course still thinks the Nats starting pitching will be elite. Given that the Nats were the oldest team in baseball last season at 30.1 years of age overall, they showed that you can win it all in a young man’s sport.