The #Nats Hot Stove event; Do you have any burning questions? No Rizzo this time. 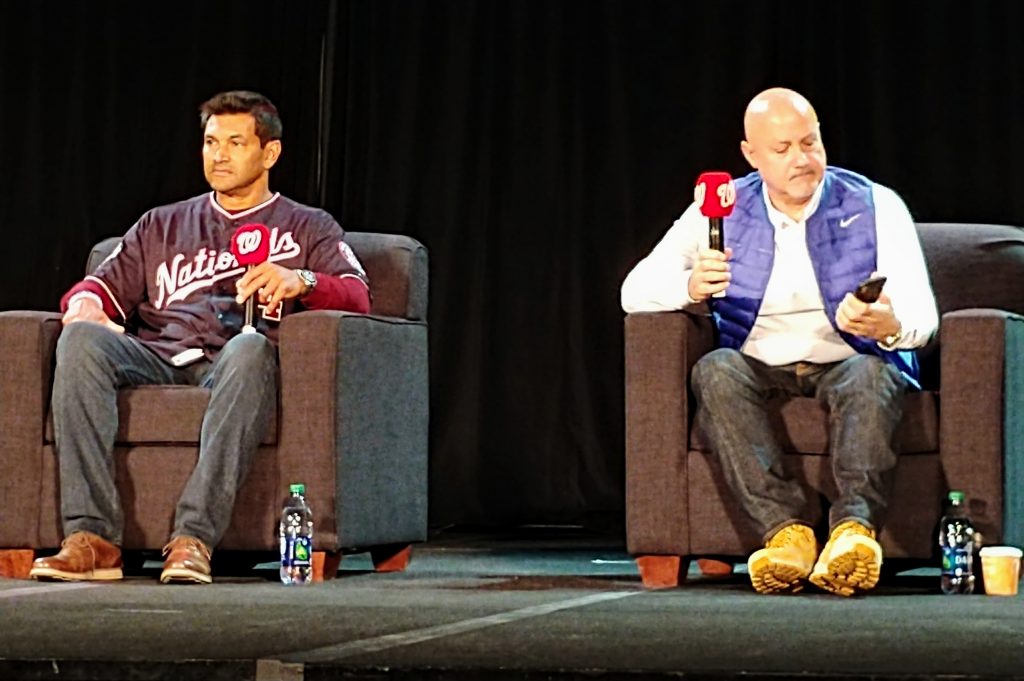 No Mike Rizzo at the event this year; Photo by Andrew Lang for TalkNats

On Sunday, the Washington Nationals will hold their annual “Hot Stove” event for their full-season plan holders at Nationals Park on Sunday. Membership in Nats Plus has its privileges. A morning email from the Nationals that was excerpted and posted by DHamm6500 stated that this Sunday’s Hot Stove event will not have general manager Mike Rizzo.

The Hot Stove panel as assembled will be comprised of assistant general manager Mark Scialabba who was recently promoted, manager Dave Martinez, and from the business side of the organization Jake Burns who is the VP of Business Operations will round out the panel. There are always great tidbits and themes that come out of the “State of the team” address if Scialabba gives one this year. On the business side, these season ticket holders get the first glimpses at the new bobbleheads and giveaways for the upcoming season as well as new ballpark upgrades and food choices.

Last year, we learned that Rizzo assembles his rosters annually based on projections to win at least 90-wins. The recurring message last year was that the 2019 daily roster would feature the best nine players, and you know what, the 2019 Nationals delivered in big ways. They are now the World Series champs.

Also in last year’s event, Davey spoke about the team’s tenets and then really hammered the point about cutting down on strikeouts and making contact. He called out Michael A. Taylor and Wilmer Difo as two players that have to improve their plate discipline or they would not factor into the equation, and we saw both were demoted in-season to the minor leagues.

Part of the winning formula was improving the defense over what the team did not produce in 2018, and last year’s audience got the message loud and clear. It paid huge dividends. Both Juan Soto and Victor Robles improved through the season defensively, and both were finalists for the Gold Glove award.

“Defense up the middle is what it is all about especially [where it enhances] our starting rotation,” Mike Rizzo said. “We have two frontline catchers — offensively and defensively — we have guys who have caught Cy Young winners. We have ourselves a vaunted – elite starting rotation. We have a shortstop [Trea Turner] who is as good defensively as anyone in baseball, and a second baseman [Brian Dozier] who is a past Gold Glove winner, and two centerfielders in Victor Robles and Michael Taylor who can go get it with anybody. So up the middle defense is important — speed and athleticism is important, and I think we were second in the National League in stolen bases, and we weren’t even good at it. We’re going to get better at it and much more efficient offensively. We are going to run the bases more aggressively and smarter and pick the ball up. My identity is we don’t beat ourselves. We expand our opportunities.”

While Dozier does not look like he will return, Rizzo acquired Starlin Castro to play some second base, and on Sunday you will hear how Castro, Asdrubal Cabrera, Howie Kendrick, Eric Thames, and top prospect Carter Kieboom will fit in.

Yes, expect some comments and questions on Ryan Zimmerman for sure. Will he be on the 2020 Opening Day roster or will he find himself in a spot similar to Jayson Werth after the 2017 season? Maybe Davey or Scialabba will announce at the event some breaking news that he inked Zim. In past events, Rizzo has broken news like he did two years ago when he named A.J. Cole his fifth starter.

For the Q&A portion of the event, the Nats changed to a format of using pre-selected questions that are submitted days before, and they will do that again this time. This seemed to have been done to control the message and keep it positive. The team went to this format after Dusty Baker was not re-signed, and that was not a popular decision among some fans, and last year the team moved on from Bryce Harper and they somehow got through the entire event without uttering his name even though he remained a free agent at the time of the event.

This year the stress points should be fewer when you are still basking in the glow of a World Series championship. Sure, some will not let go of the fact that Anthony Rendon moved on to the Angels, but when you have some that only dwell on the negatives, you can understand why the Nats want to control the vibe of the event. It should not be hard to be positive — just look around as the World Series trophy will probably be up on the stage during the event. The Nats have bolstered their bullpen with re-signing Daniel Hudson and newbie Will Harris, and they brought back Stephen Strasburg, Yan Gomes, Kendrick, and Asdrubal too.

The band is almost back together, and maybe, just maybe, Rizzo is not done with this roster.