Who’s on third? Highlights of a conversation with Davey Martinez 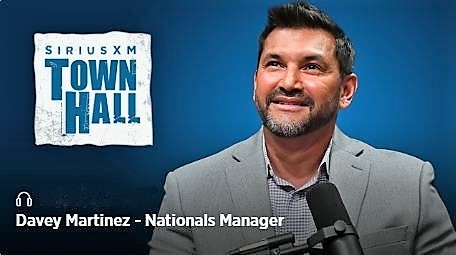 The SiriusXM town hall with Davey Martinez, moderated by Chuck Todd, was an event I was fortunate to attend. Davey was just back from a vacation in Bali; he looked very rested. Before the program started he said he wanted to tell us this because he knew there had been talk about his having missed WinterFest: As has been mentioned elsewhere, the Bali trip had been planned two years ago – he and his girlfriend were the sole bidders on a ZiMS Foundation auction (he said he had always wanted to go there). As the winners, they were given three date options — October 2019, or January or February 2020. Good thing they hadn’t chosen October.

Also before things got rolling, he and Chuck were just shooting the breeze, and Chuck asked informally who is playing third base.

“That’s a good question,” Davey said, with a laugh.

He made sure we knew he was wearing socks with camels on them. (They were very cute.) He talked a bit about how he wound up in coaching. It had not been his aspiration at all; when his playing days were over he was happy to go home and stay put, spend time with his kids. But in 2006, Joe Maddon called and asked him to come teach at Rays’ spring training, which he enjoyed enough to do again in 2007. At the end of that spring he was packing to go home and the team logistics guy said I need your luggage by tomorrow. What? Turned out the first base coach had injured his knee and needed surgery, and Maddon was putting Davey in that spot. So much for his not wanting to travel anymore, which he had told Maddon more than once.

On the question of who will play third base, despite what you may have read elsewhere, he did not say specifically that Carter Kieboom is going to be the Opening Day starter. Kieboom will play third during spring training. Davey absolutely believes that Kieboom can handle the position, but he also said, “we will see.” Starlin Castro will be the starter at second, with Trea Turner at short. Asked whether Trea might be shifted, Davey was emphatic in his response: “NO.”

Asked about the new three-hitter rule for relief pitchers, he said that it informed their approach to constructing the bullpen. The specialist role is essentially going away (although one could be used to, say, get a third out after a starter is pulled, which would sidestep the requirement), and avoiding injury is a major concern. That is why they signed both Will Harris and Daniel Hudson to shore up the back end. It sounded like they and Sean Doolittle will mix and match innings as makes the most sense.

If I understood him correctly, Paul Menhart was his idea to replace Derek Lilliquist when it became clear a move was going to be made. He had a lot of good things to say about Menhart. For that matter, he really likes and has a great working relationship with all the coaches. They don’t always see eye to eye but that’s good. “Tell me something I don’t know” is what he wants from them.

His health is good; follow-up tests have all been negative.

Talking about gameplay: Strikeouts are unacceptable! (Not the first time I have heard him say that.) He believes in team at-bats and manufacturing runs. Move the ball; it puts the pressure on the other team. Shifts are data-driven. He acknowledged that some pitchers don’t want shifts behind them but it’s up to them to speak up and let the fielders know they are changing things. (My notes are unclear, but I think what he was saying is that when the infielders shift they are expecting the pitcher to follow a sequence and it’s on the pitcher to let them know he is going to do something else.)

He admitted that he does occasionally get himself ejected deliberately to fire up the guys. No, not in Game 6!

Asked who on the team would be good at coaching/managing, he said Howie Kendrick would be a good coach or front office guy; Ryan Zimmerman would be a great bench coach. But if he had to pick one to be a manager: Max.

He talked some about the team as a unit. The chemistry and culture of the clubhouse were huge factors in their turning things around. They’re very tight; they all genuinely care about each other, have each other’s backs. He said, with a laugh, that they should make Trea the shark man. This year he wants them to focus on what they did, to keep that edge. Remember that “we are good.”

Some tidbits from the postseason: Pitching and defense wins championships. He had the starters skip their bullpens. What were the best moments for him? Watching Howie do what he did. And watching Juan Soto; nothing rattles him. Fun fact: During the Wild Card eighth inning, he didn’t actually know for sure what was happening till the second roar, and then *he* went nuts, jumping around the dugout like crazy as the go-ahead run scored. When did it sink in that they had won it all? It hasn’t yet really; it’s all still a blur for him. It’ll feel real when they get their rings, he said.

This is by no means comprehensive. It was a really enjoyable session and if you can listen to it I highly recommend doing so. It’s scheduled to be broadcast on MLB Network Radio on SiriusXM this coming Thursday, Jan. 23, at 5 p.m. ET.