Posted on December 24, 2019 by ArVaFan aka Laura Peebles 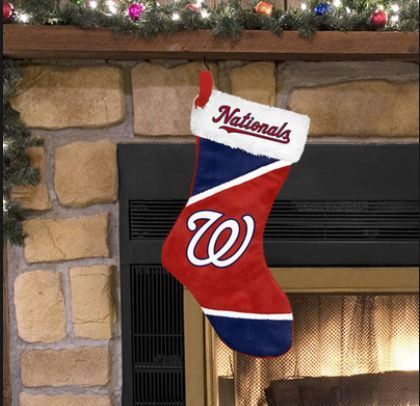 Ho ho ho home run Ho-wie Kendrick! It is that time of year again, and while the Astros had Cole in their stockings, the Nats got rings in theirs! A tip of the cap to Casey Stern because nobody can complain any more about that Lucas Giolito, Reynaoldo Lopez, and Dane Dunning trade for Adam Eaton because “Prospects are cool, but parades are cooler!”

What the Nationals should find in their Christmas stockings:

Davey Martinez: an apology, signed by everyone who doubted him in May. Should be about the length of Juan Soto’s home runs against the Yankees.

Mike Rizzo: a large tube of sunscreen. He has everything else, he doesn’t need skin cancer to go with it, so if he’s going to run all over Florida without a hat at least use sunscreen. And no, Santa is not bringing him a third baseman—he has to buy that himself.

Aaron Barrett: a large box of Kleenex. Because if he makes the opening day roster, we’re all going to cry.

Ben Braymer: a magnifying glass so he can examine the chances of him making the opening day roster.

James Bourque: a 2020 that will make people forget his forgettable 2019 debut.

Patrick Corbin: a Rolaids Relief Fireman of the Year Award for his performance in Game Seven.

Wilmer Difo: a membership to one of the airline clubs so he’ll have a place to sleep in O’Hare as he shuttles between Fresno and DC.

Sean Doolittle: a middle reliever so he doesn’t collapse on the mound from overwork by June.

Adam Eaton: Howie won’t fit in his stocking, so how about a nice FOCO dual bobblehead to commemorate their 2019 success? https://www.foco.com/products/howie-kendrick-adam-eaton-washington-nationals-2019-world-series-champions-dual-driving-bobblehead

Roenis Elías: no bats for you, but how about a nice Bat Conservation International membership as a consolation prize?

Eric Fedde: suitcase with wheels because he’s going to be commuting between the minors and majors a whole lot this year (he’s the only #5 pitcher with options left).

Howie Kendrick: new display cases for all those watches and weaponry.

Carter Kieboom: a chance to live up to the hype.

Kyle McGowin: an ERA with only 3 digits.

Jake Noll: a nametag so people don’t call him Ryan in Florida.

Tanner Rainey: consistency (where his catcher wants it).

Victor Robles: whatever it is that Juan Soto uses to train his batting eye.

Joe Ross: a settled role with the Nationals . . . or someone else.

Adrián Sanchez: a year with a small, but positive, WAR contribution.

Max Scherzer: one of those shiatsu heat/massager gizmos for his back and shoulders.

Stephen Strasburg: what do you get a guy who has everything? A place to put it. Probably already has a bank vault and a garage: how about a nice trophy case?

Kurt Suzuki and Aníbal Sánchez: since all those special signals were slowing pace of play, Manfred has relented and allowed them to use the first electronic pitcher-to-catcher communication setup! (P.S. the Astros probably are selling theirs used on eBay).

Michael A. Taylor: a cat. Because MAT has 9 lives, too.

Austin Voth: a t-shirt “I’m the Austin with an I.”

Austen Williams: a t-shirt “I’m the Austen with an E.”

Ryan Zimmerman: either a contract or a nice set of Nationals-logo golf balls.