The #Nats have shuffled the deck with their coaches! 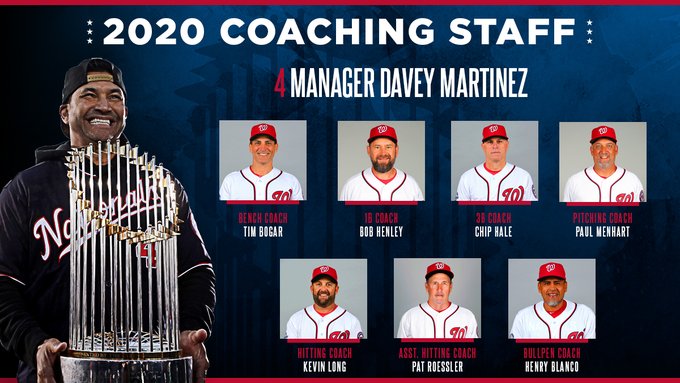 The Washington Nationals announced several changes on their coaching staff that includes one new hire and three new roles for existing coaches. Manager Dave Martinez‘s first base coach, Tim Bogar, will be his new bench coach, and he had actually interviewed for the Mets managerial vacancy. He was considered a “strong contender” before the Mets went in another direction and hired Carlos Beltran. Since Bogar is taking Chip Hale‘s spot as bench manager, Hale will take over as the team’s third base coach, and Bob Henley will move across the diamond to take Bogar’s spot as the first base coach. The final change on the coaching staff includes the only hire from outside the organization as Martinez hired Pat Roessler as the assistant hitting coach.

Three coaches will remain in their same roles, and they are  pitching coach Paul Menhart, bullpen coach Henry Blanco. and Kevin Long who will once again be Roessler’s boss as they worked together on the Mets staff and Roessler took over when Long departed to the Nats. The 59-year-old Roessler has ties to the Expos during 2000 and 2001 seasons when he was their hitting coach.

“I’ve known Pat for a long time,” Martinez said. “Unbelievable baseball guy. I feel like he fits in. As you know, my staff is a bunch of baseball rats, and he is one of those guys.”

Roessler is replacing Joe Dillon who is the only coach who left the staff, and he will be the hitting coach with the Phillies.

For pitching coach Paul Menhart, he joined the Nats coaching staff on May 2nd when Derek Lilliquist was fired, and Menhart fit in immediately and often complimented by his pitchers.

“[Menhart] did really, really well,” Martinez said. “He knows these guys. These guys appreciate him, and after talking to our pitchers and bullpen guys, they appreciate him and like him, and he’s got an opportunity to come back here and do again.”

The shuffling of roles between Bogar, Hale and Henley seems unusual and it is, but a decision that manager Davey Martinez said is being made so each coach can get “a different perspective” and avoid “getting stagnant” after winning the World Series. Do you buy that?

“For me, I’m getting a different voice,” Martinez said. “I thought about this for many years after winning, and having been around for 10 years: Doing some different things, I think it would great for these guys, to see a different perspective of the game.”

Fans have long been unhappy with Bob Henley who earned the nickname of “Sendley” and was guilty of some controversial sends and also led to some injuries like a Howie Kendrick hamstring injury after his return from his achilles, and a serious ankle injury for Adam Eaton after recovering from a blown-out knee. Henley has been on the Nats coaching staff the longest and has been with the organization since 2003 when the Nationals were the Montreal Expos. In 2014, Henley was promoted to the Nats staff as Matt Williams’ third base coach and has remained through Dusty Baker‘s stint, and stayed in the same role the last two years with Martinez. Where Henley has excelled is as the team’s outfield instructor and he has also helped the catchers. Often, Henley could be seen in early afternoons working with Juan Soto and Victor Robles on outfield defense and that paid dividends as both improved during the season to a point that Robles was a Gold Glove finalist.

“What [Henley] has done with our outfielders, I want him to be more engaged, really,” Martinez said. “Because Juan’s gotten better, Victor’s gotten better. He’s always there. He’s been unbelievable for years, but I want to kind of give him another avenue — another perspective.”

It was rumored that Henley had interviewed for the Padres’ managerial opening after the season, and that job went to the much younger Jayce Tingler from the Rangers’ system. Many times after a World Series win, other teams will poach a team’s coaches. In all, the Nats only lost Dillon, but expect Bogar to be a hotter commodity in the future because bench coaches become highly desirable by other teams due to their on-the-job training as the first lieutenant under the manager, and Bogar has been in that position previously for the Red Sox, Rangers and Mariners.

“I told [Bogar]: ‘You deserve a chance to manage,’ ” Martinez said. “He’s really good, and when he didn’t get the [Mets] job, I did tell him, ‘I’m glad you’re back.’ He didn’t know what we were going to do, but when I called him and told him we’re going to move him to bench coach he said: ‘ That’s a great idea. I would’ve never thought of that.’ ”

The decision to move Henley away from third base was a long overdue move, but the move to demote Hale to third base was unexpected. Some believe in “if it ain’t broke don’t fix it” but this is not business as usual — and we will wait and see how the new assignments work out and especially how Hale is at third base or he could find a new nickname with a negative connotation that rhymes with “Hale”.