A memorable trip to Cooperstown

Posted on November 12, 2019 by ArVaFan aka Laura Peebles

A visit to Cooperstown

The best-laid plans, right?  Back in May, when the Nationals were 19-31 or thereabouts, Spouse and I looked at each other and said, “when October rolls around, we’re going to want to get out of town ASAP because it sure doesn’t look as if the Nationals will be demanding our attention. How about we cash in that behind-the-scenes tour of the Hall of Fame we got, oh, five years ago?”

First, Logistics (skip this paragraph if you’re not interested):

So we made a plan. We booked a flight BWI to Albany and a B & B in Cooperstown (The Inn at Cooperstown. Definitely recommend!). Found a “Park & Stay” deal at an airport hotel near BWI (leave your car there up to a week with a one-night stay, and their shuttle brings you back & forth to the airport). Watched NLDS game 5 in the hotel (Sorry to have to admit it, but for the first time in my life we made enough noise that the neighbors tapped on the wall.  Watching back-to-back homers off Kershaw will make you forget your manners. As an odd footnote, we were in hotel rooms watching the games for both of Howie’s grand slams this year). Flew to Albany on Southwest, stopped at a local microbrewery for lunch and beverages (yes, non-alcoholic for the driver!). Drove the rental car to Cooperstown through some really nice fall scenery, taking the back roads instead of the Thruway. Parked the car behind the B & B and didn’t move it until we drove back to Albany four days later. We watched the next two Nationals wins at the B & B: we were in a corner room so we didn’t disturb anyone. (We were also a bit more cognizant of our noise level.)

Cooperstown other than the National Baseball Hall of Fame:

Cooperstown truly is a one-stoplight town. There are some decent restaurants (Mel’s, Alex’s World) although many of the more casual places were closed for the season, typically closing after Labor Day.  We got sandwiches and deli stuff at Danny’s Market. There was a good coffee shop a block off Main Street. More restaurants would be closing just after we left (Columbus Day seems to be a “second cut-off” date, and we were there that weekend). You can jog from one end of town to the other in 20 minutes (I ran the experiment). For a cheap lunch, the chili at Schneider’s Bakery for $5.50 is a deal. Of course, there are lots of baseball-themed stores, including memorabilia, custom bats and jerseys, non-MLB baseball clothes (i.e. Baseballism) and plenty of souvenir stores. There were some end-of-season bargains. The lake is beautiful, and there are plenty of benches to just sit and enjoy the water. Local artists’ work is available in the store in the Library building. The Farmers’ Museum was interesting (great for kids!), and there’s an art museum as well (next trip . . . which I suspect will be 5 years after Max retires. Not going for the ceremony—the place is just nuts. Besides, the induction merchandise will be half price by end of season!). 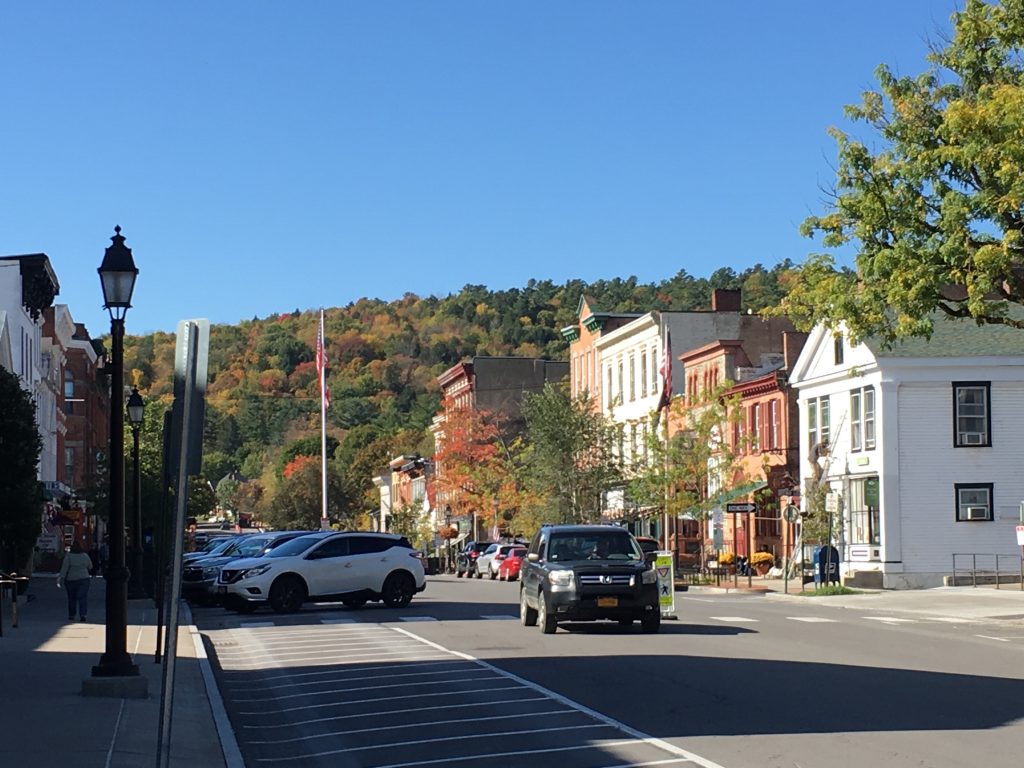 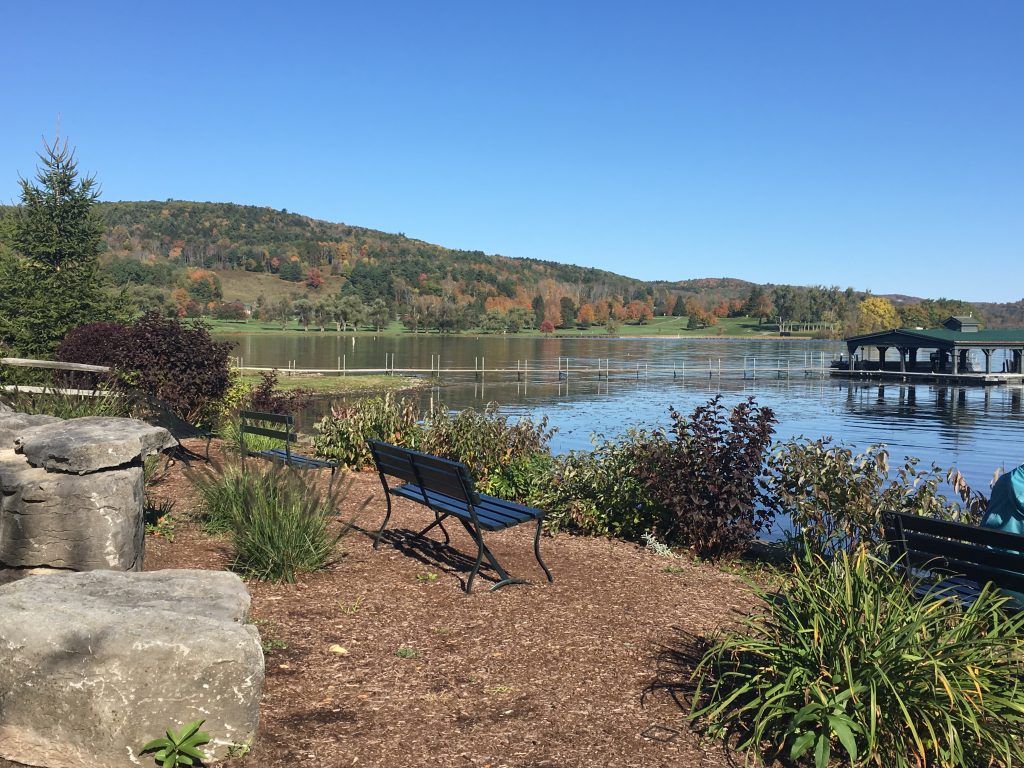 If you remember your history, you might remember the Cardiff Giant (one of the great 19th Century hoaxes.) The actual (carved stone) giant ended up at the Farmers’ Museum in Cooperstown. Go figure. 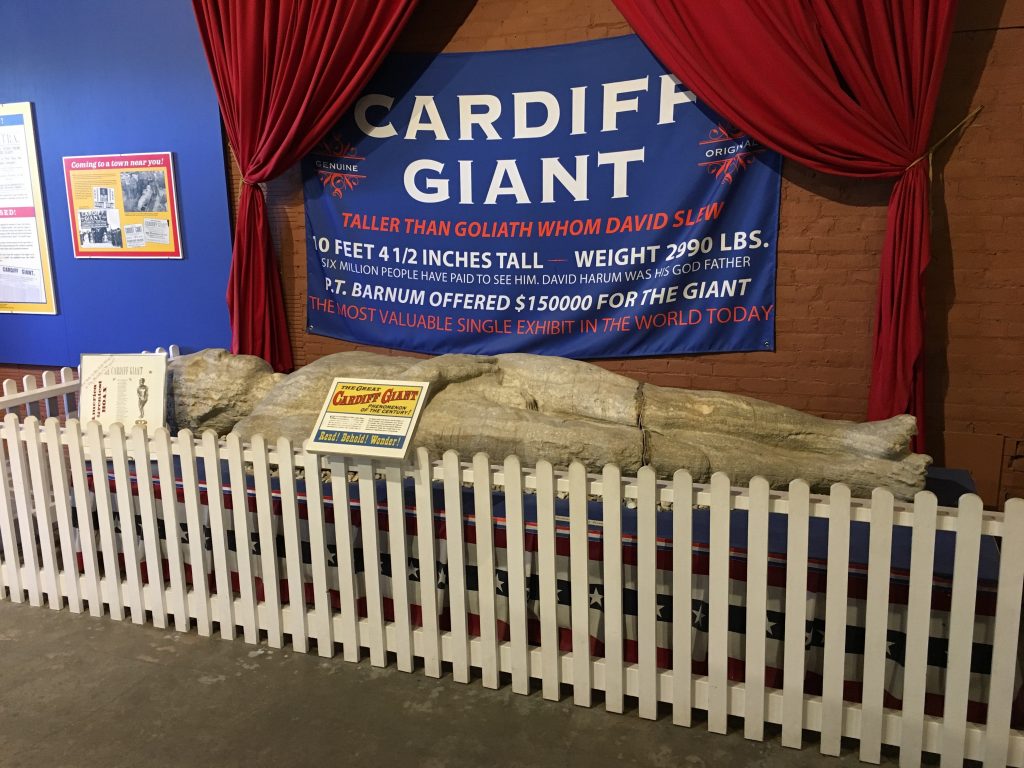 As I mentioned, the Farmers Museum is great for kids—they have a lot of activities and demos, including a working blacksmith. 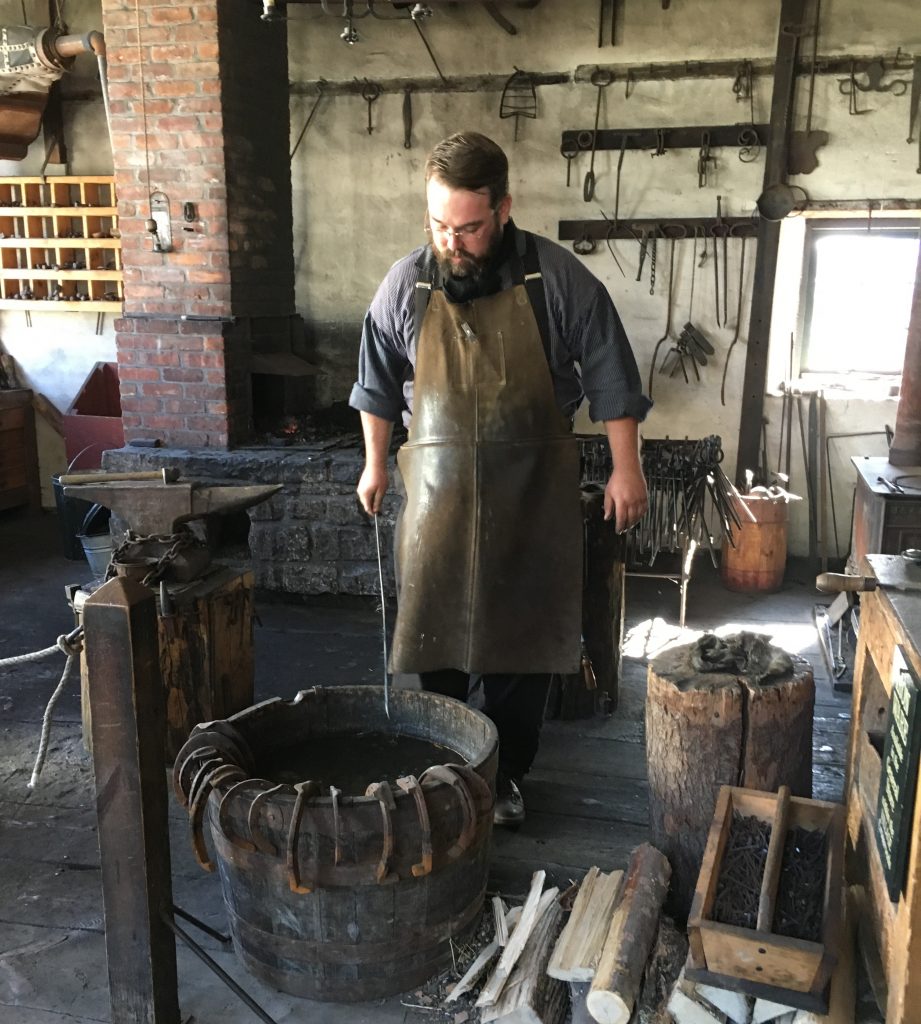 We stopped to watch two local teams play at Doubleday Field, which is right off Main Street. They weren’t great, but it was fun to watch a baseball game that didn’t matter so we could just enjoy the game. One team was the Waltham Braves, so they had “Curly W” caps and Braves on their jerseys. That took a little getting used to! 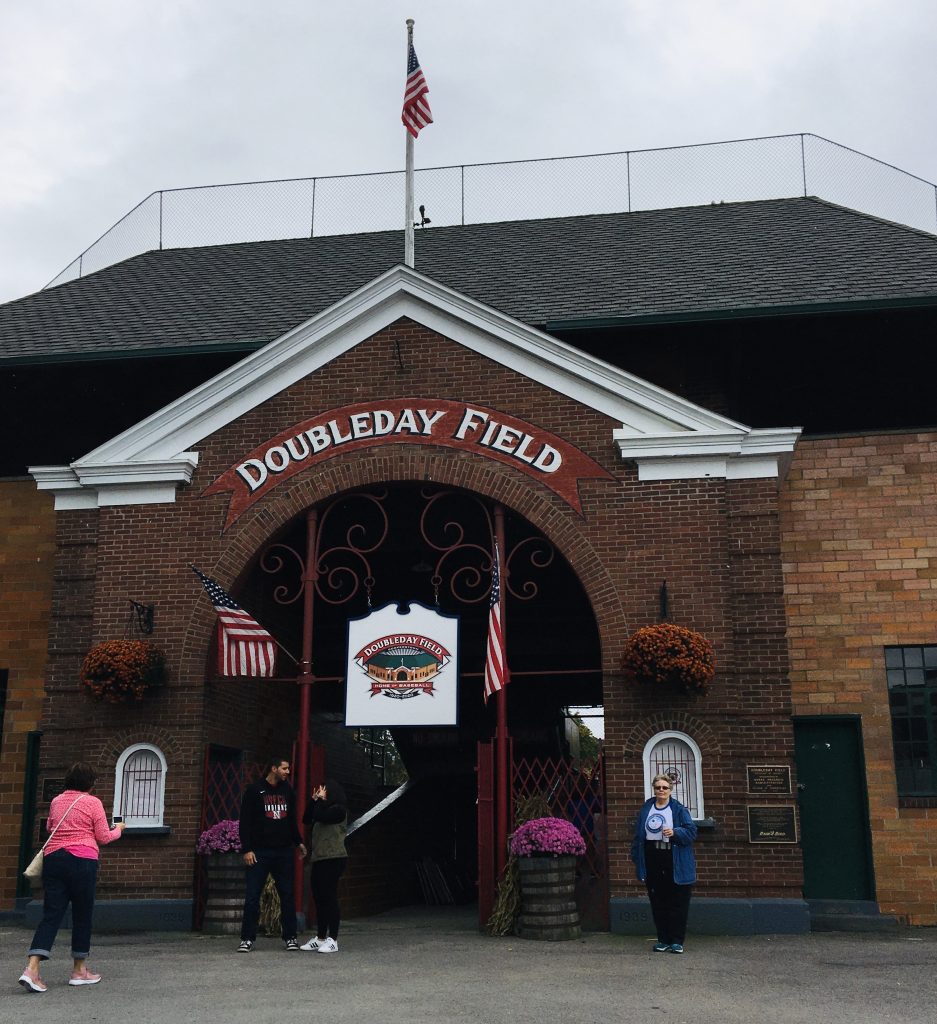 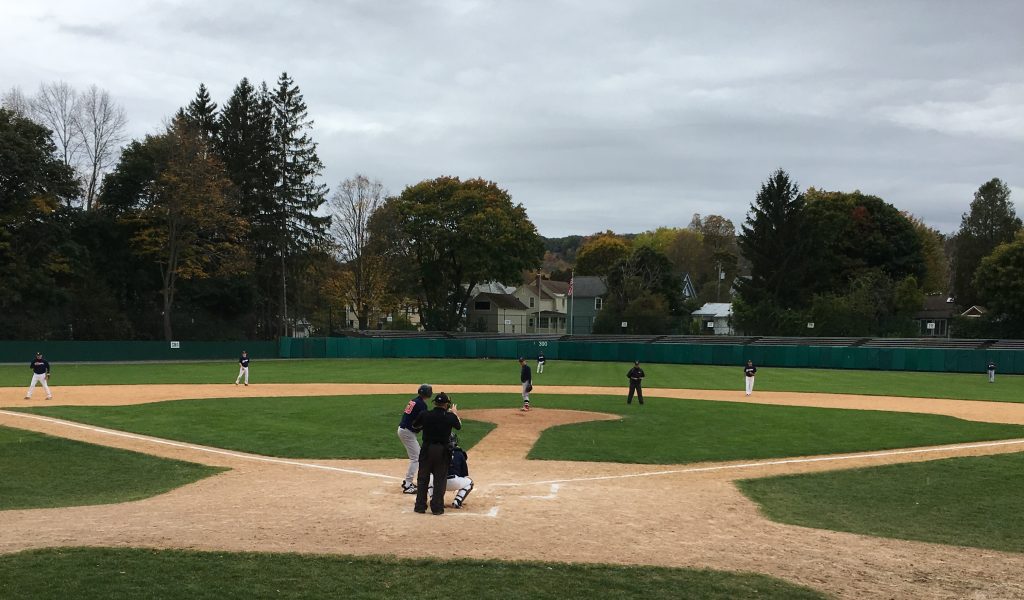 There are excellent local breweries (i.e. Brewery Ommegang), but we decided to just drink their products and walk back to the B & B rather than have to worry about transportation (none are within walking distance). The B & B offers a package that includes brewery tours, food and LOTS of samples, and full transportation, but our timing wasn’t right for that. 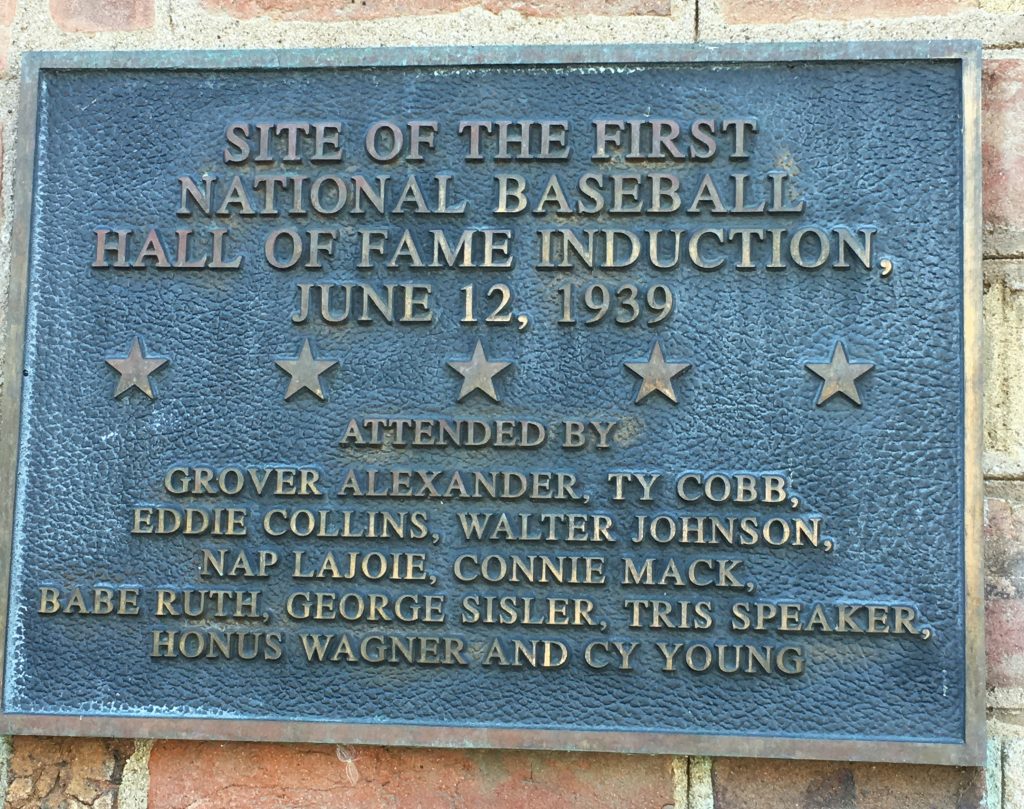 Okay, on to what you really care about! We met a curator who showed us through the archives, gave us some history, and let us hold a few items. Photos were encouraged. I did think it was funny when I went down the trophy shelves to see how many non-baseball trophies there were. Families of HOF guys were glad to get rid of the stuff, so it got donated . . . . and therefore here’s Babe Ruth’s golfing trophies and Roger Hornsby’s bowling trophies next to the “Fireman of the Year” Award (wish they still had that).  And yes, we got to hold Ty Cobb’s bat.  Really heavy! Stanton’s original face protection mask, designed based on “half” a football helmet, actually has a “G” worked into the wires. They pulled out a Walter Johnson trophy for me. Those are Griffey Jr and Ty Cobb’s bats, and Cobb’s glove. 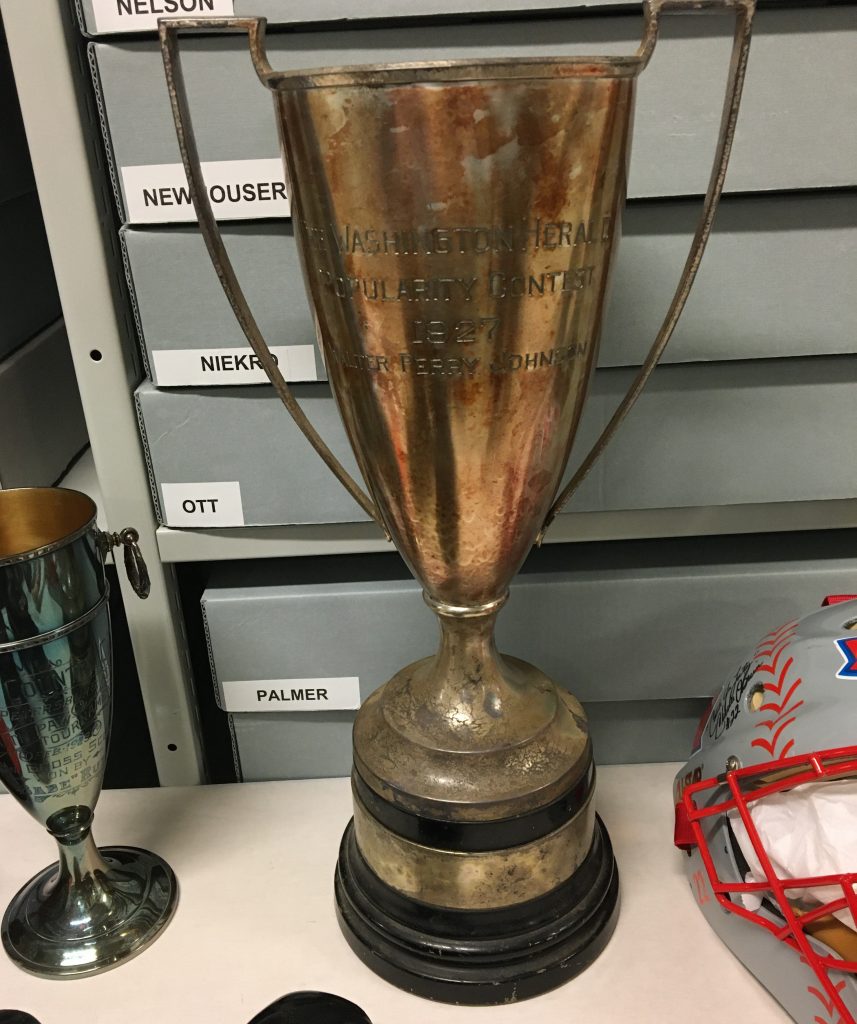 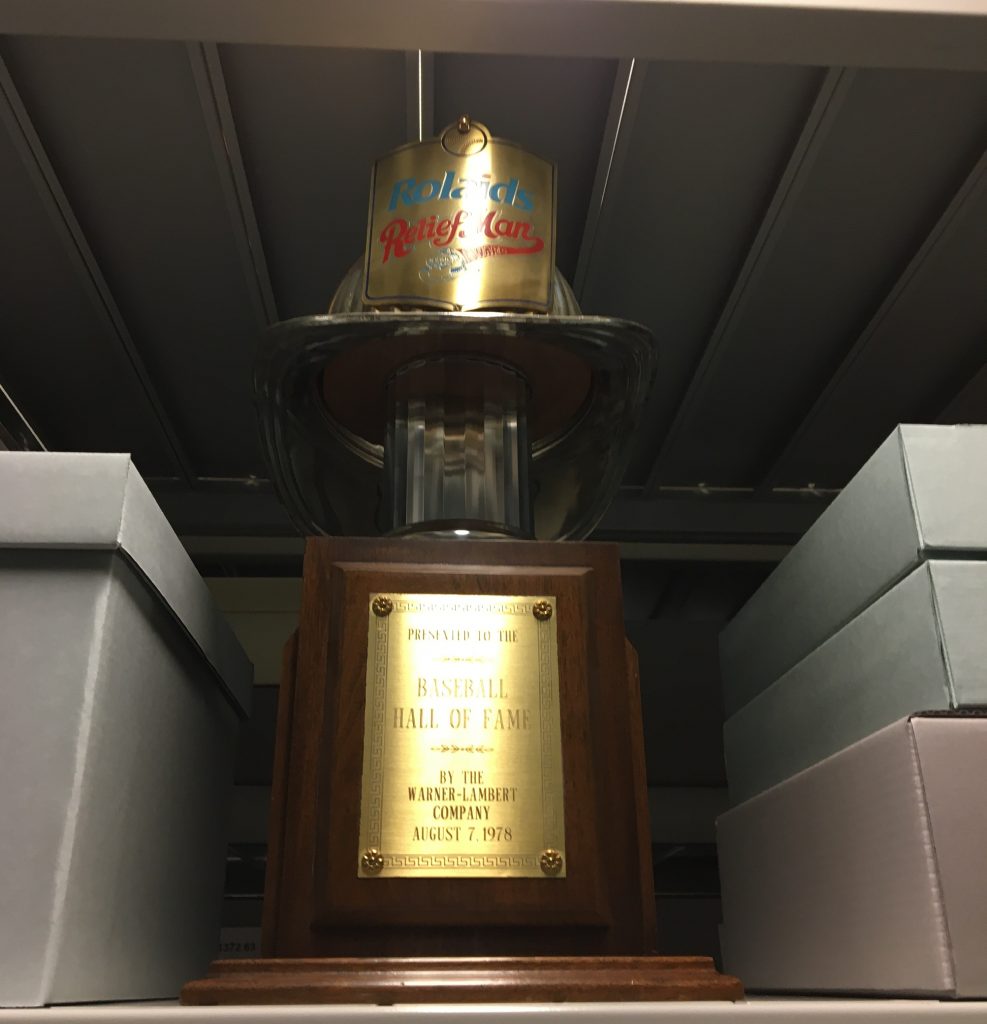 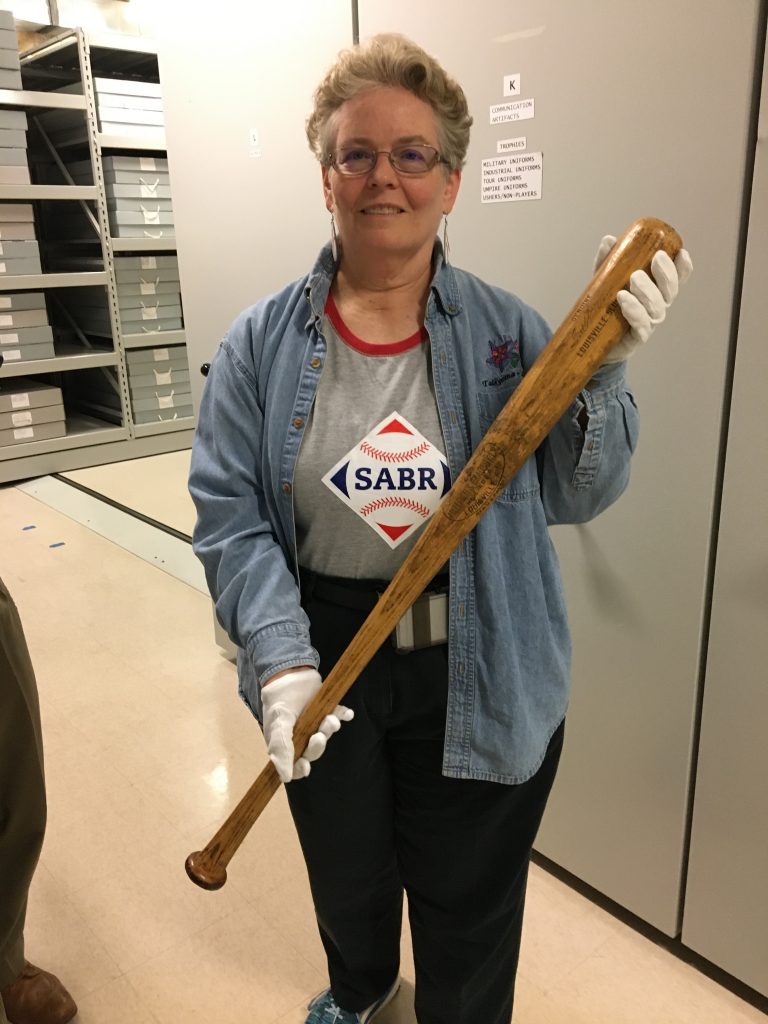 As far as acquiring memorabilia, everything is donated. Literally—there’s only one item that they paid $5 for back in the 1930’s. When a memorable event occurs, (i.e. no-hitter) they inquire immediately about the cap, last pitch ball, rosin bag, etc.. He said that they usually get the items, although not right away. For examples, they only got George Brett’s “pine tar” bat after he broke it. Scooter Gennett wouldn’t give them his “four homers in a game” bat . . . until he went into a slump and decided that the bat didn’t have any more hits in it. Also, they have someone at certain post-season games to get items authenticated and donated ASAP. Among the Nats items from the WS were Juan Soto’s and Howie Kendrick’s home run balls. Although the Soto ball was out of sight of the authenticator (on the train tracks, if you remember), security guarded it until they could get up there. Because the WS balls have a logo, it couldn’t have been a batting practice ball. Howie’s, well, that yellow mark proved it! See https://baseballhall.org/news/artifacts-from-2019-world-series-coming-to-cooperstown for the full list of WS items (spoiler alert: no shark, although the one on the dugout fence was authenticated). 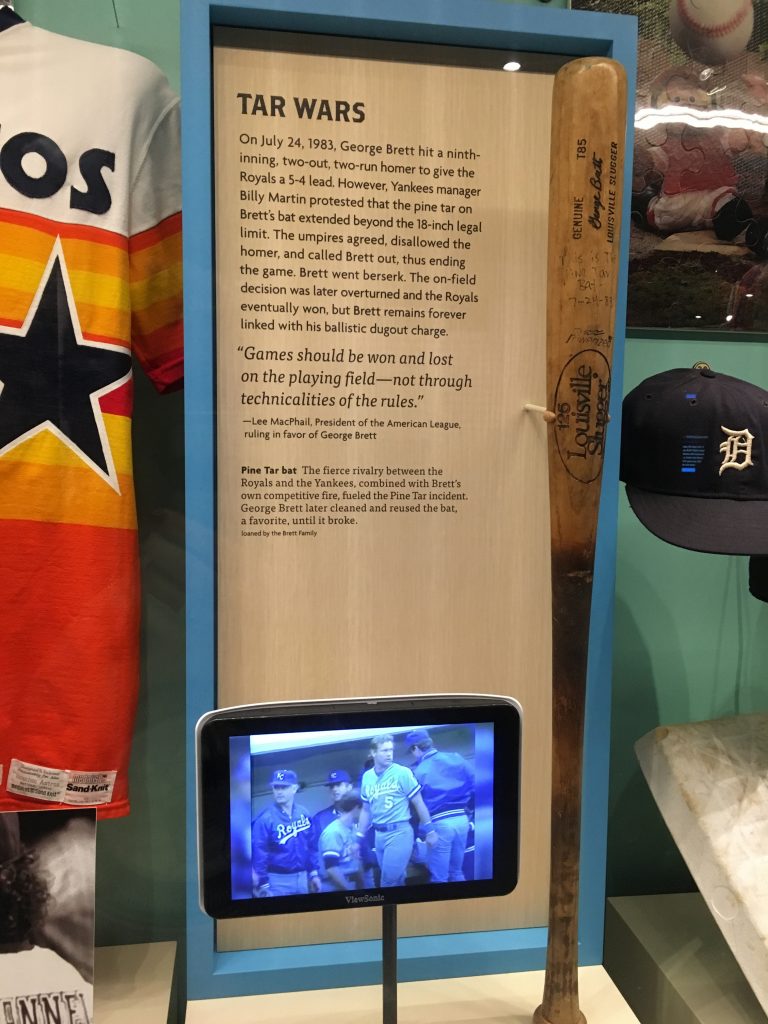 One of the items we looked at was the scoresheet from “the shot heard round the world.” If you look at the last entry, you’ll see that there’s just a little dash where he was resting his pencil: he was so excited that he forgot to make the entry for the home run. 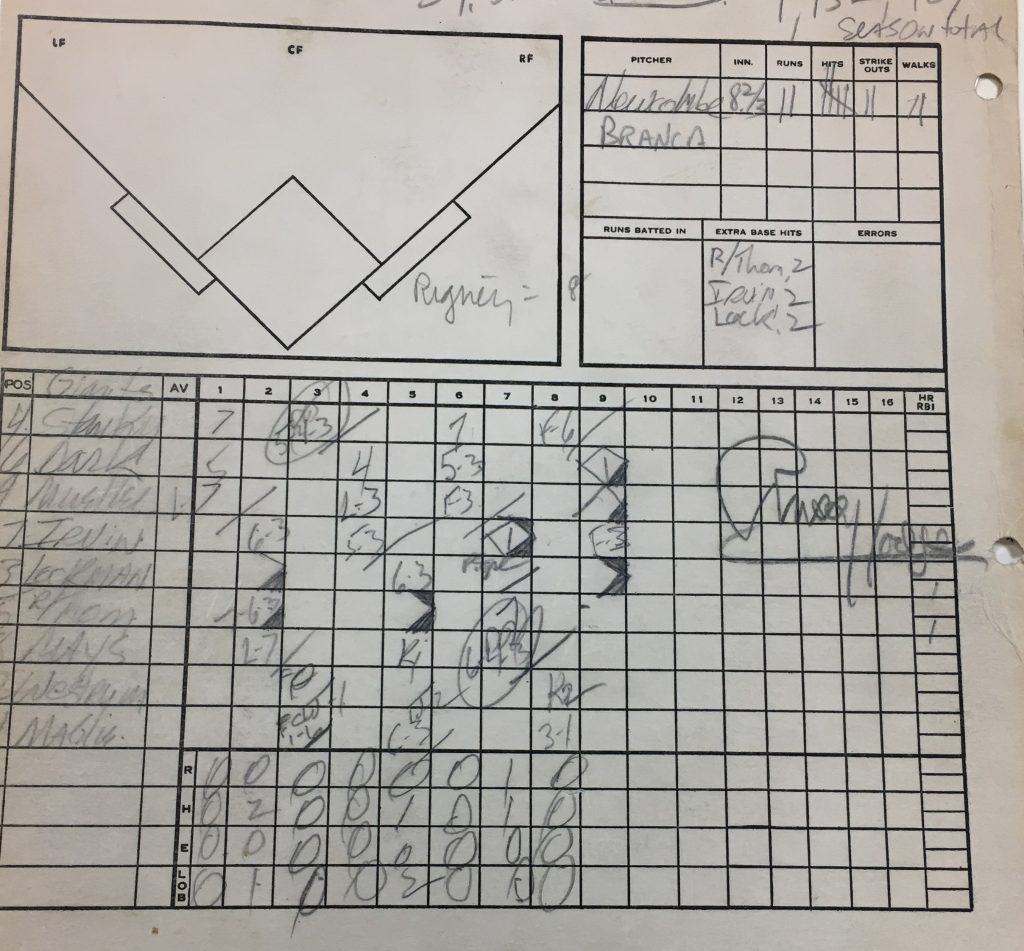 Here’s a page from one of the manual ledgers that were kept before everything was computerized.  You can see how an error could be made that might be corrected years later when some researcher with a calculator comes back to check something. The columns of information look pretty much the same as the Baseball Reference pages today. 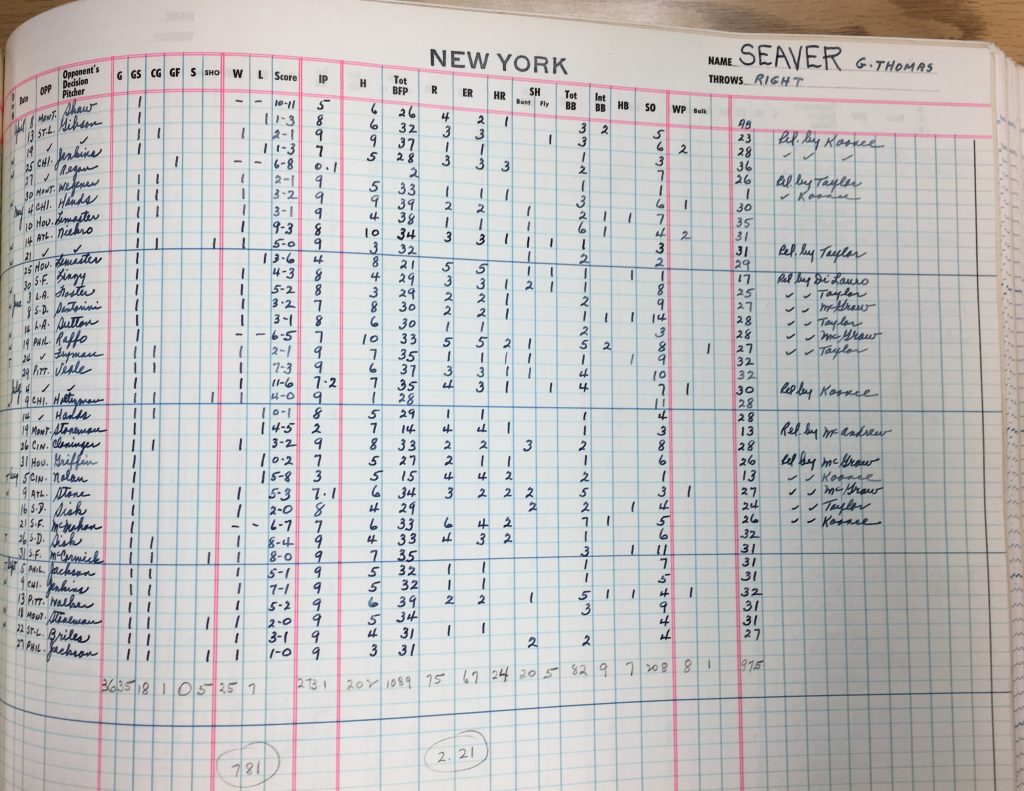 Exhibits are updated: here’s the new Old Hoss Radbourn with the “60” instead of “59.” 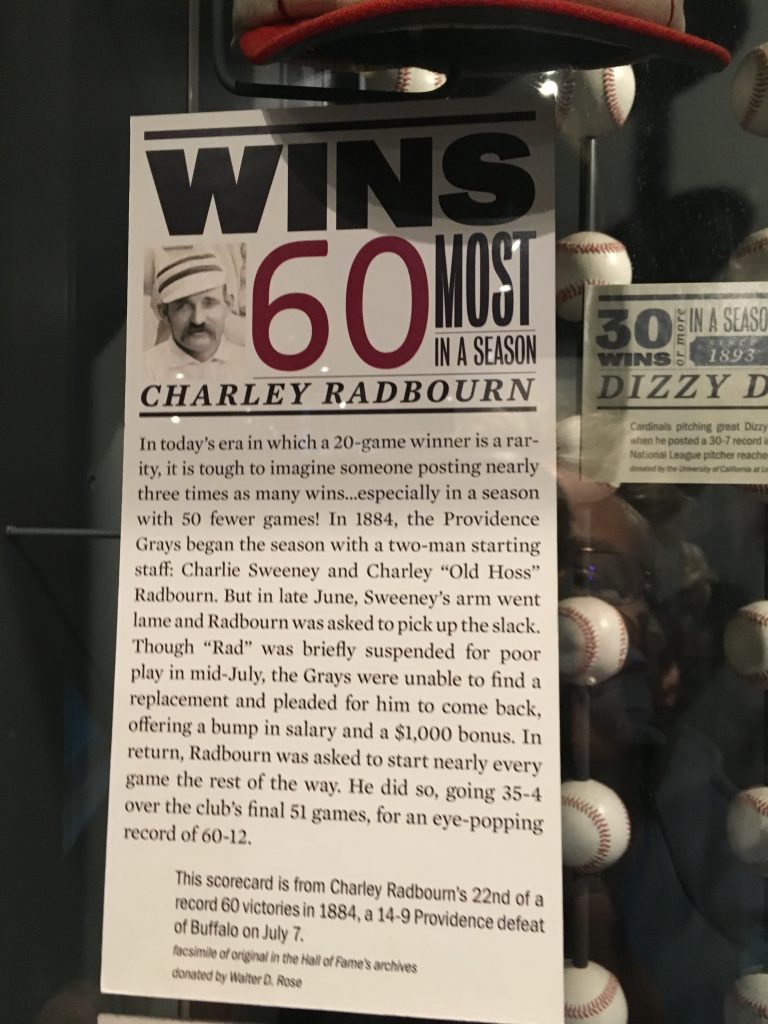 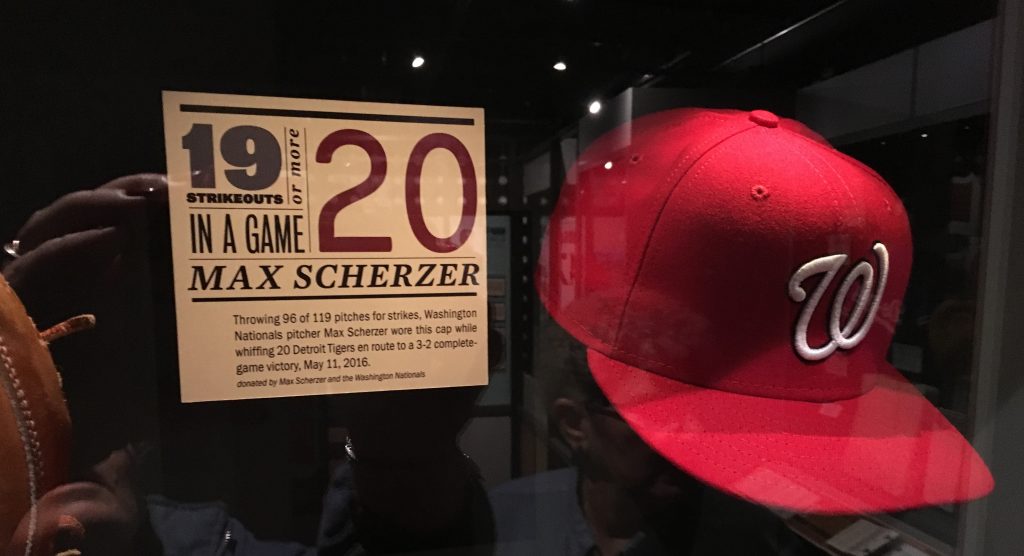 Here’s one of the artifacts in the general displays. Seems timely. 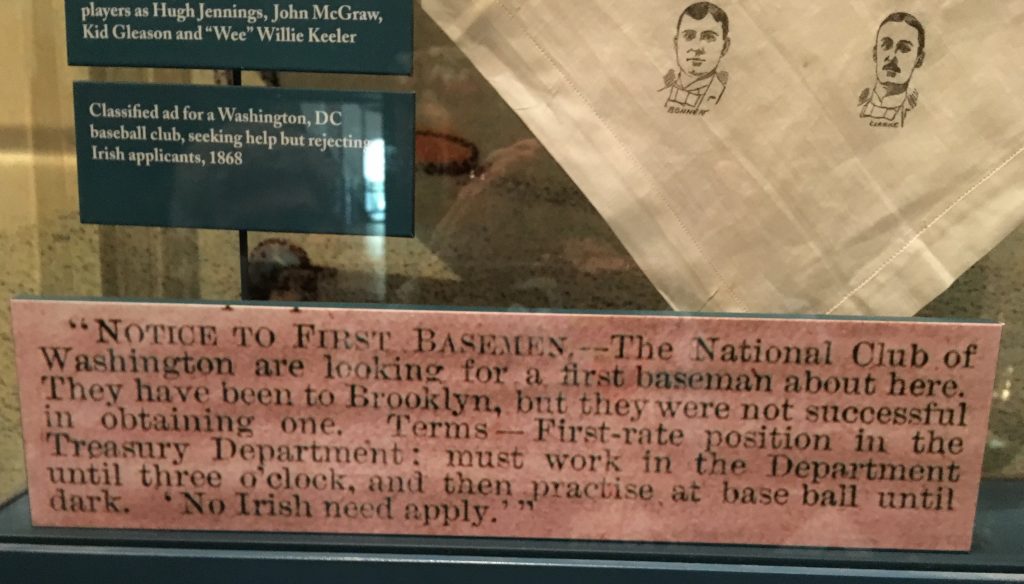 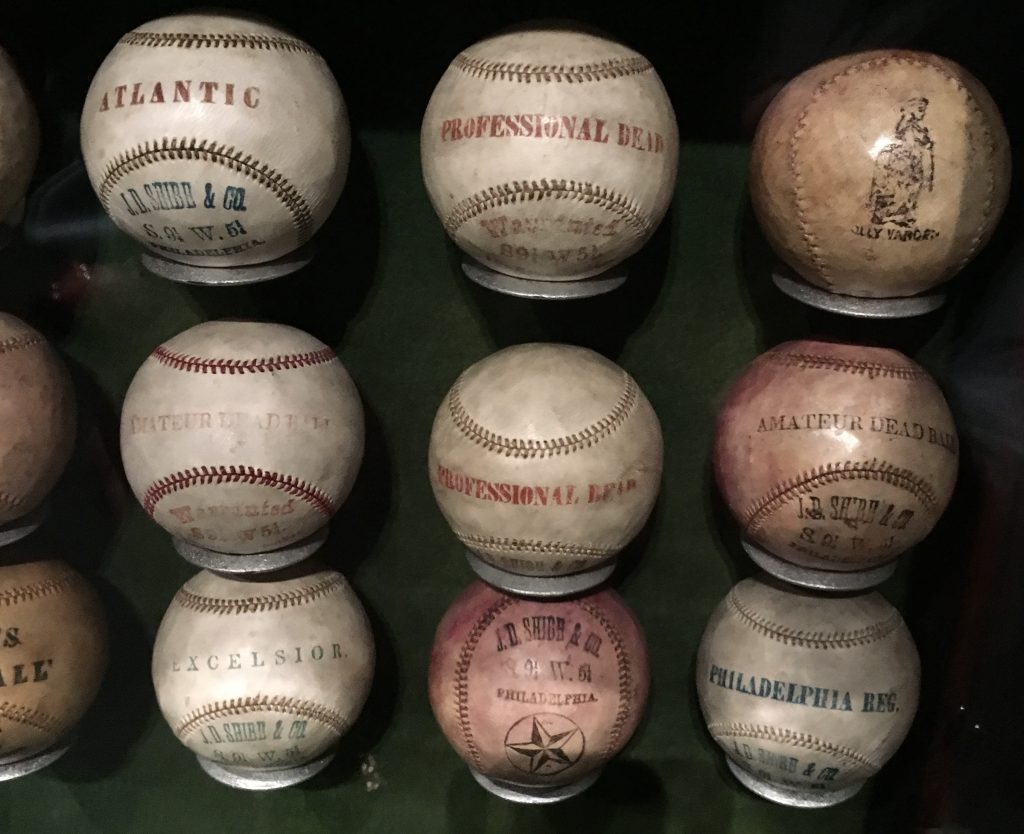 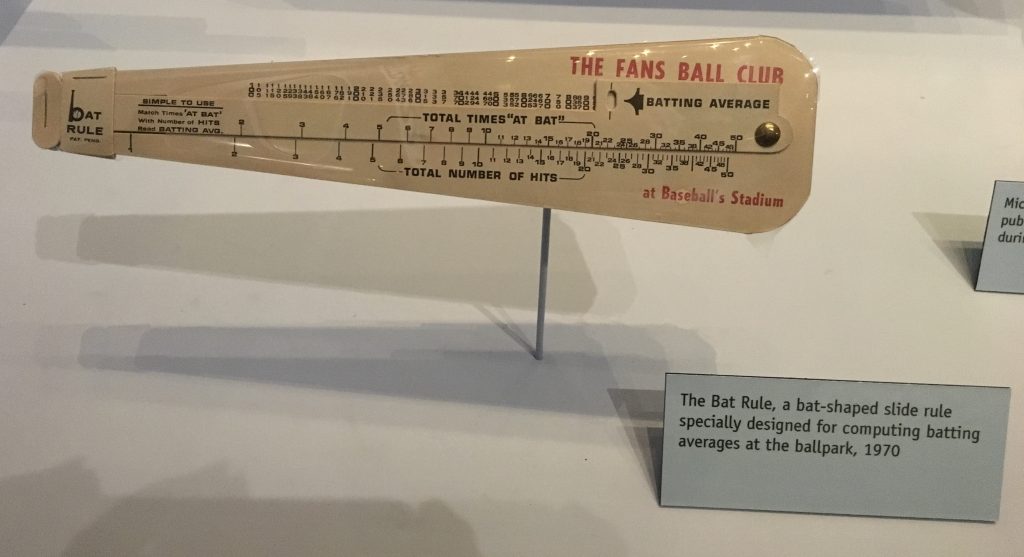 Among the exhibits were interactive polls. By a 2-to-1 ratio, the visitors favored a universal DH and allowing Pete Rose into the Hall.

You really need two days to see the full museum. We skipped the Negro Leagues section because we’d just been to the Negro Leagues Museum earlier this year. Watching one of the movies gives you a break from walking around the exhibits. Obviously, there’s not a lot from the Nationals—just a handful of Max, Zim, and Harper items in the Nationals display. I did see Cabrera listed in the “unassisted triple plays” list, but that was when he was with the Indians. 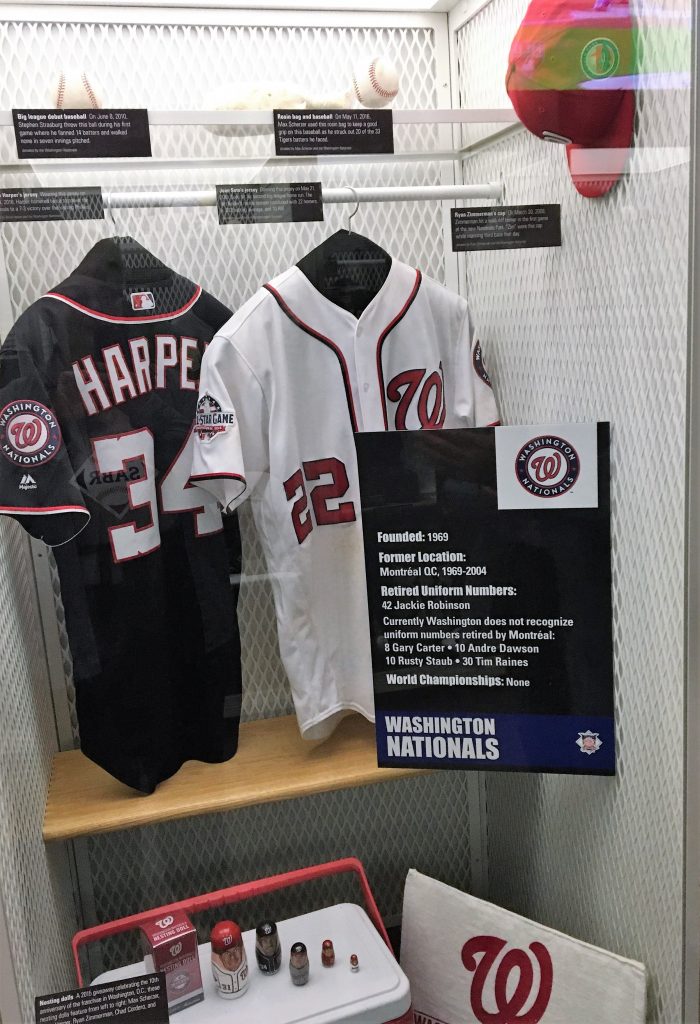 They also had a media exhibit with memorable TV and radio calls playing.  Who knows, maybe Charlie and Dave will be included there at some point. 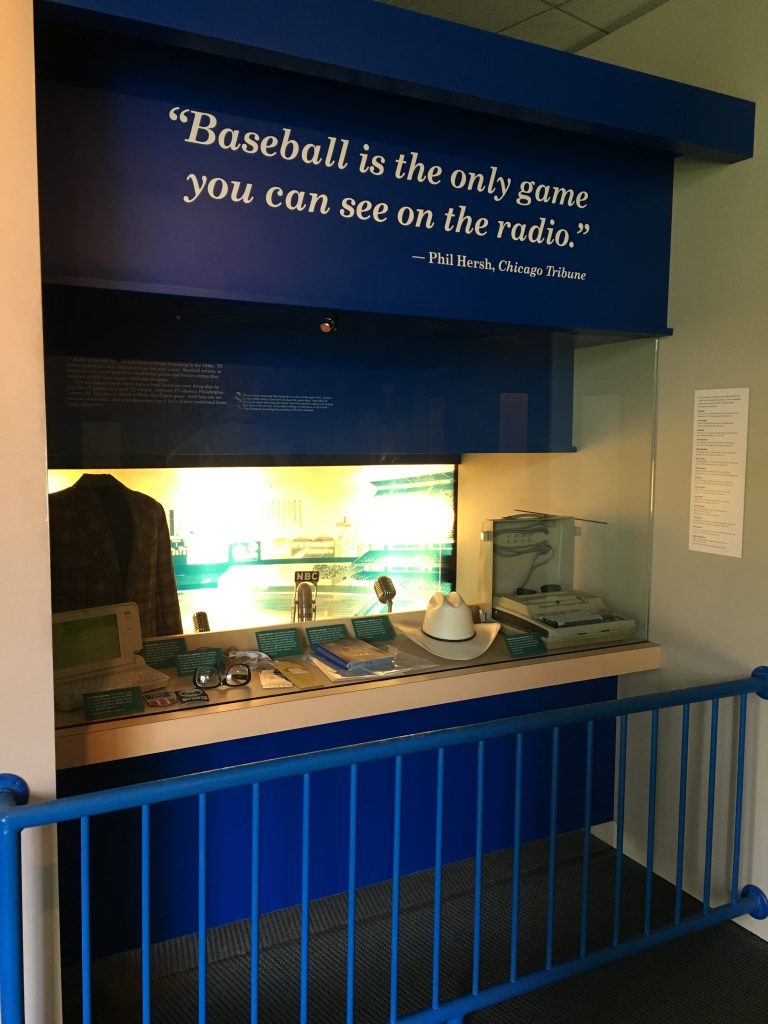 Each player who is inducted has a special display case for a year. Most of the items are loaned by the player and returned at the end of the year (and probably donated by the family shortly after the HOF’er death. One person’s collectible is another person’s clutter).

Our last stop was down into the Hall itself with the plaques. There’s a lot of back-and-forth between the vote and the induction ceremony about the wording on the plaque. They’ve had to change a couple of plaques: on one, they got a Hispanic player’s last names in the wrong order. After Jackie Robinson died, they added a sentence to his plaque about his role in integrating the major leagues. He had been adamant about leaving that off, but his family thought it should be acknowledged, especially since the stress probably contributed to his early death. If a player served in combat, there’s a medallion below the plaque. See Yogi’s plaque.

Note that Yogi’s cap is blank. He was having a dispute with the Yankees at the time of his induction, so he had his profile instead of his face forward so it wouldn’t be so obvious that he didn’t have the logo on the cap. 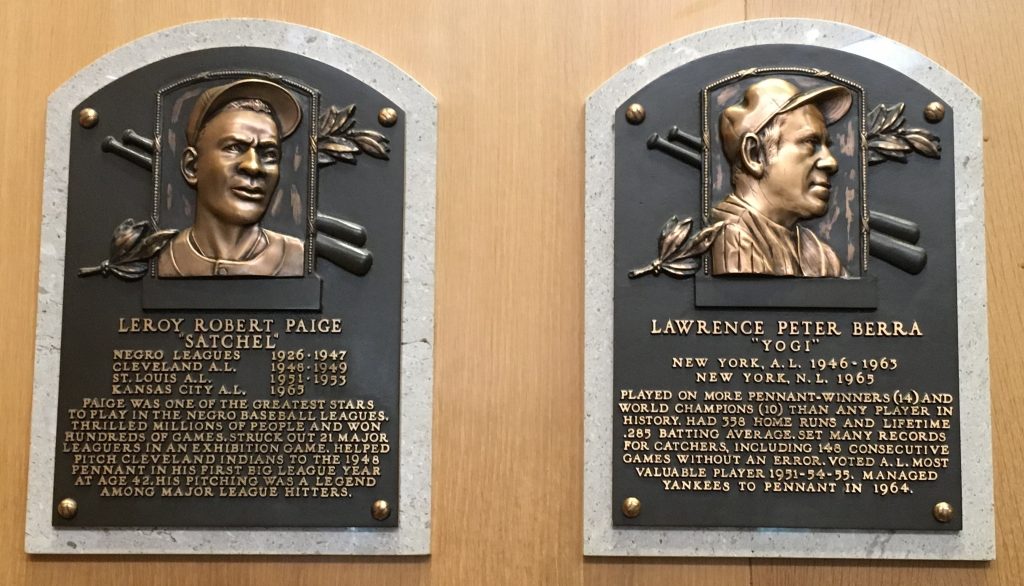 The only woman in the Hall. 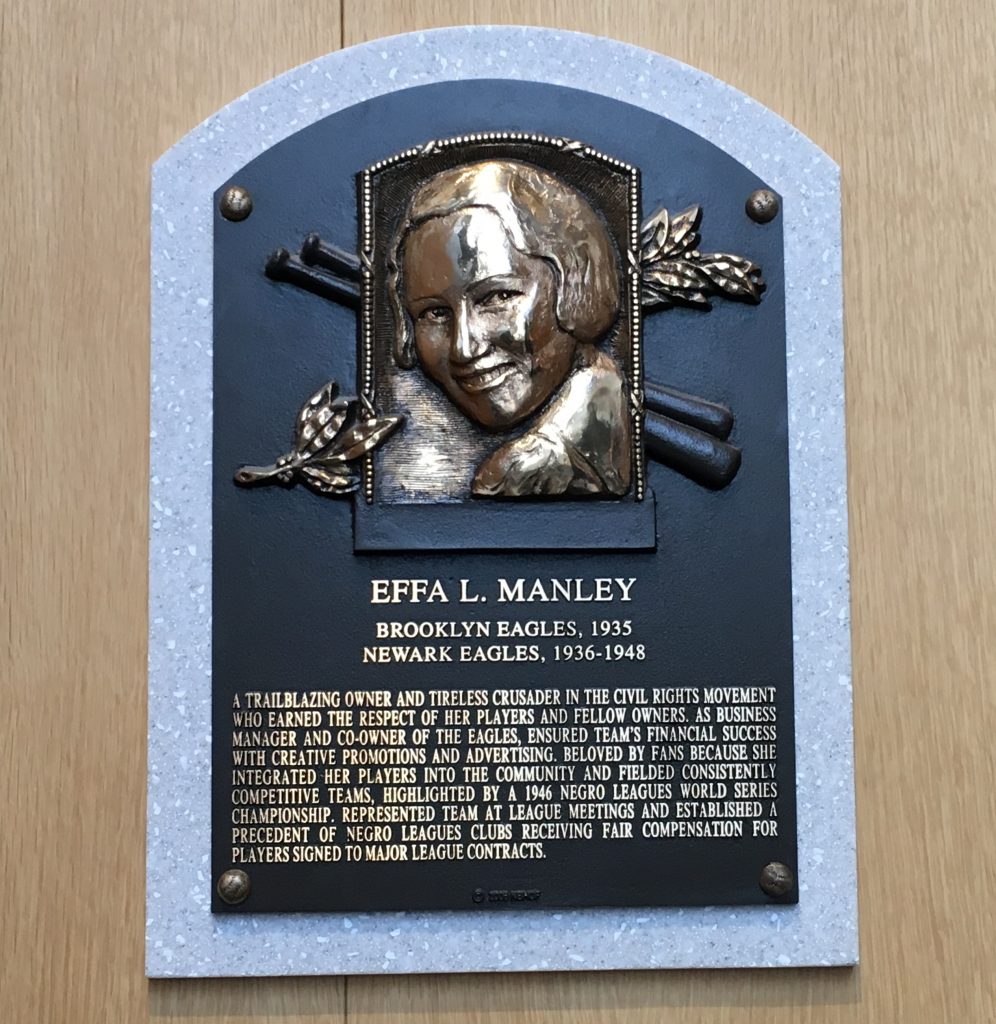 Of course, I had to take a photo of Pudge! 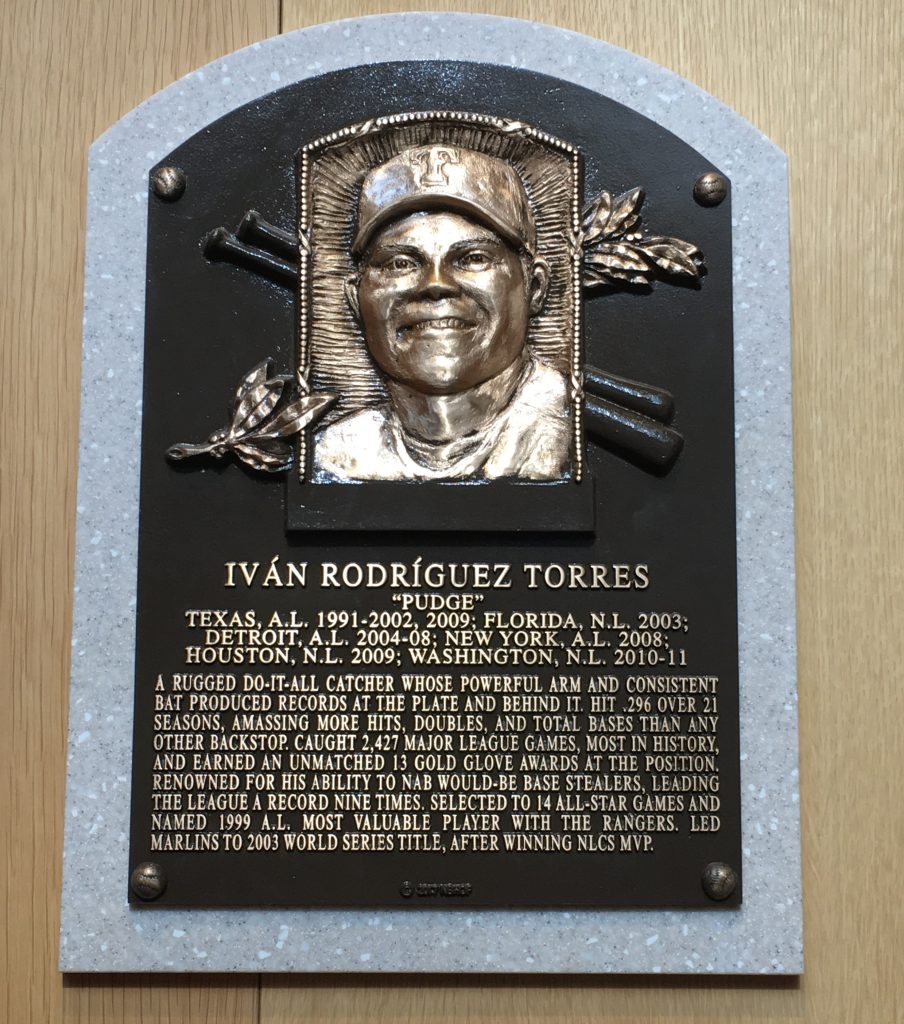 The Hall appears to be getting full: they’ve already added a rotunda to the original hall area, and it looks as if there’s only a handful of slots left on the wall. However, when they started putting the plaques in the rotunda, they didn’t use the short “side” walls, as they did in the original area. So they are going to move the plaques “back,” so to speak, to match the format of the original hall (that may happen over this winter). That project doesn’t sound too bad, except that in 2015, the players started signing the wall where their plaque will go. So, they literally have to move the wall panels to avoid having the wrong signature under a plaque. Last year, with a six-person class, it seems as if the rotunda would fill up pretty quickly, even with the rearranging. However, a typical class is only one or two, so they think they’ll have enough space until about 2050 . . . and by then someone else will be worrying about it.

The plaques do travel, usually for an event at the player’s home park. There are special carrying cases: they get the case a ticket (middle seat) with a curator and a security guard on either side.