Game #4 World Series A pivotal game for both teams!

Many might have missed this — that these Washington Nationals were on an 8-game postseason winning streak until that ended last night. As the Nats learned against the Dodgers, you just go 1-0 today and the Nats no longer need a winning streak — just two more wins to complete their magical season. The Nats were a disturbing 0-10 in RISP situations last night, and the lack of anything resembling clutch was missing other than Howie Kendrick‘s pinch-hit single and Victor Robles‘ triple that scored the Nats only runner from first base. BABIP. There was also a continuation of poor homeplate umpiring that bit the Nats last night. Time to turn the luck back to the Nats, and the team sends Patrick Corbin back to the mound in a start tonight.

The Houston Astros will send RHP Jose Urquidy as part of what the Astros are calling a bullpen game as they did not put their fourth starter Wade Miley on their World Series roster. The Nats got deep last night into the Astros bullpen and worked Brad Peacock for 20 pitches last night.

Will we see Howie Kendrick back in the starting lineup for the Nats? The lineups will be posted in a few hours and keep in mind that the Astros also are not carrying any left-handed pitchers. 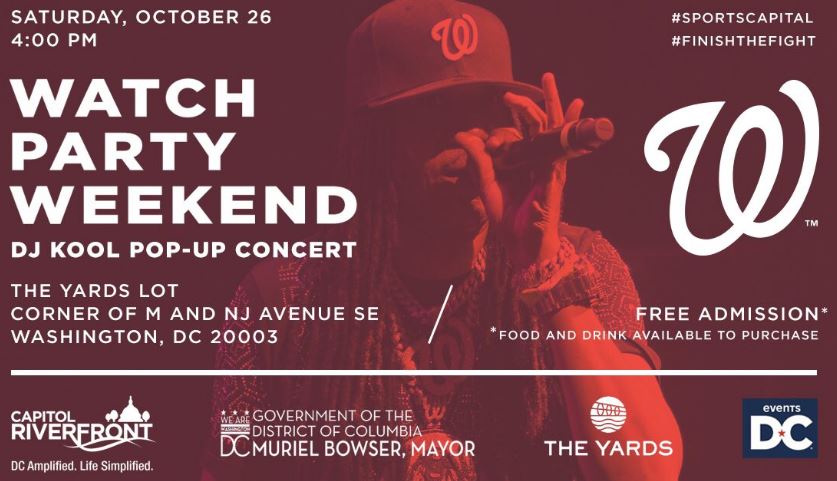 The party was not only inside Nationals Park last night, it was also in the Navy Yard bars, restaurants, and at The Yards. Tonight EventsDC is featuring DJ Kool in concert for “free” in The Yards West lot today at 4pm. All of that is followed by a pre- game party and watch party with fun and beverage, and maybe some surprise Parra sunglasses if Pepsi got in another shipment. The Nats will have a Nats Youth Academy top scholar throw out the first pitch tonight.

For some good news, the Capital Weather Gang now believe the weather will be dry tonight and that is a positive because a few days ago they were forecasting some rain.

The #Nats lineup for Game 4 of the #WorldSeries
against the Astros bullpen: