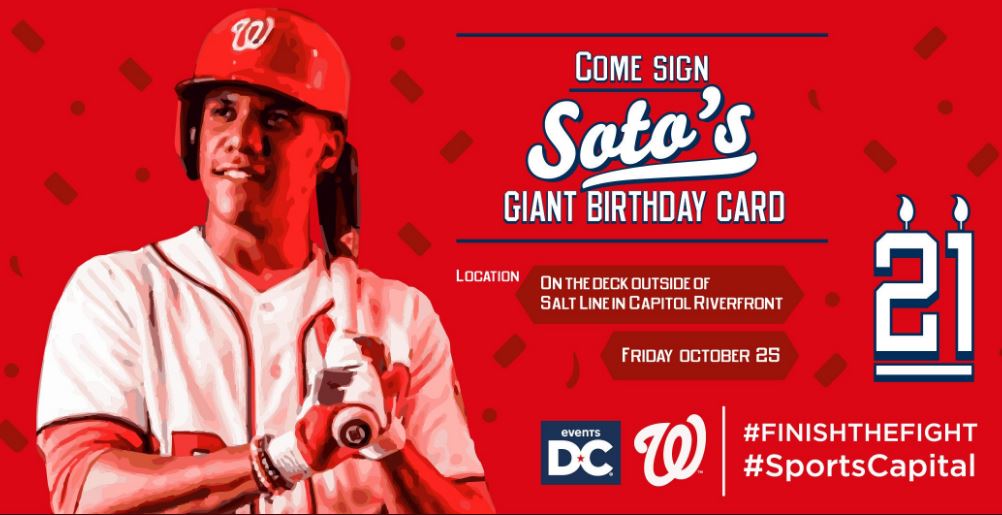 Our youngest player on the Washington Nationals turns 21-years-old at midnight! Juan Soto has gone from a 16 year old member in the Dominican Academy to a budding superstar. Soto was signed for the Nationals largest bonus ever in the Dominican at $1.5 million, and the dividends have paid off as he has smashed so many records for players younger than twenty-one. The got the hit that won the Wild Card for the Nationals and the game tying home run in Game 5 of the NLDS against the Dodgers, and in Game 1 against the Astros in the World Series he hit a towering home run and had 3 RBIs as the offensive star.

Events DC is the official sports authority for Washington, D.C., and they are doing a fun activation for fans to sign a life-size birthday card for Juan Soto, where there will also be giving away swag + treats.

Starting at 9 AM tomorrow morning, the birthday card will be on display on the deck outside of the Salt Line Restaurant at 79 Potomac Avenue SE behind the stadium.

“World Series moments are once in a lifetime – and as a city, we are so proud to call Washington, D.C. home to the 2019 World Series match up against the Houston Astros,” said Ashley Forrester, Corporate Director, Communications & Marketing of Events DC. “With all eyes on the nation’s capital this weekend – we are ready to roll out the red carpet for our residents, guests and visiting team from Houston – to create the ultimate baseball fan experience that extends beyond the walls of the ballpark – and into our neighborhoods.”

Across all 8 corners – the city is dressed in red – from the restaurants and bars to the local businesses and hospitality partners. This is a true testament to DC as a “Sports Capital” – and a nod to the incredible and passionate sports fans across Washington, DC.
Not only is DC’s World Series berth an incredible opportunity for the residents to participate in and celebrate – but Washington, DC will generate an estimated economic impact of $6.5M with two guaranteed home games in DC.

It was a fight to bring baseball back to DC – but in 2005, MLB with the DC government brought the Nationals back to this great city and in 2008, Events DC worked with MLB and city partners to open Nationals Park. Fourteen years later and after much time and investment – the city is now reaping in all of the benefits of bringing baseball back!

In addition, there is the Events DC WATCH PARTY WEEKEND at the CAPITOL RIVERFRONT where you can celebrate this weekend at Yards Park to cheer on the Nats!
PREPARE YOUR NATITUDE for the ultimate World Series Weekend at the Capitol Riverfront. In partnership with Mayor Muriel Bowser, The Capitol Riverfront BID, and The Yards, they will be kicking off a weekend of watch parties beginning Friday, October 25 at 6:00 PM with a pre-game celebration in Yards Park equipped with a giant watch party screen. The event will include swag giveaways, live music performances, lawn games, glitter face paint, and beer and wine.

The watch party fun will continue Saturday and *pending Sunday at The Yards featuring local brews, ballpark fare, outdoor games and activities, and showings of Game 4 and Game 5 (if necessary).  Yards Park is located at 355 Water Street SE, Washington, DC 20003 and admission is free (*Food and drink available to purchase).