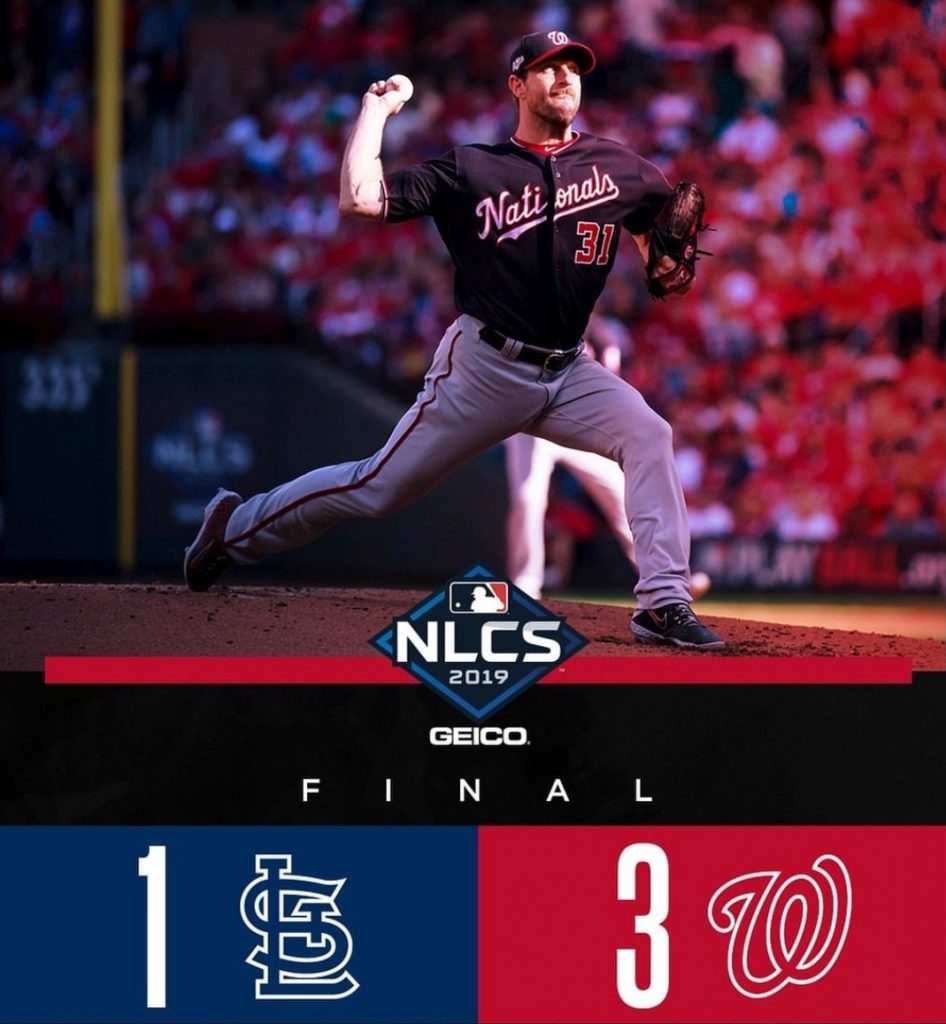 “Anything you can do I can do better,” seemed to be the song Max Scherzer was humming as he tried to one-up Anibal Sanchez who was four outs from a no-hitter yesterday, and Scherzer got close taking a no-hitter into the 7th inning and it ended on a misplay by Juan Soto in leftfield. In the end, all that mattered was the Nationals won this key game to take a 2-0 lead in the NLCS as the team will fly back to Washington, D.C. tomorrow for game three.

Actually the only run that the Cardinals scored in the game which came in the 8th inning was on a misread by Michael Taylor who was good all game and put up the first run of the game on a home run. It was unfortunate but did not factor into the Nats giving up the lead. Sean Doolittle was tabbed with the earned run which should have been unearned if the official scorer assessed an error on Taylor, but in the end the Nats won 3-1 to take a 2-0 lead in this best-of-seven series. The game winning RBI was courtesy of Adam Eaton on a bases clearing double that drove in two runs off of starter Adam Wainwright. Three role players, Taylor, Eaton and Matt Adams had three of the biggest hits of the game. Adams hit a long pinch-hit single off of the wall in the gap that missed being a homer by a small margin. Adams scored along with Trea Turner on the Eaton double.

This game was really all about Max Scherzer who took advantage of the early shadows, and he finally locked in his fastball command and made the pitches he needed to for the win as he really cruised through this game.

“We kind of know how to play the chess game and move it around,” Scherzer said.

After the game, Scherzer got salty in an interview with Lauren Shehadi who wanted Max to walk down memory lane and talk about pitching on the same mound as Wainwright, and Scherzer wanted none of that and snapped at Shehadi’s question which abruptly ended that interview.

“We’re going home and playing in front of our home fans,” manager Dave Martinez said. “It’s kind of nice going home up 2-0 in the series, but those guys are really good there. This series is far from over. We got a day-off tomorrow. Get a good rest. Work-out for a while. We still have a long way to go. My message after the game was still 1-0 every game.”

The bullpen was well laid out in Dave Martinez‘s own chess game as he maneuvered through the 8th inning with Sean Doolittle who pitched well enough to get through the inning but was victimized by the bad misread. In the 9th inning Patrick Corbin came in as a LOOGY just to get Kolten Wong which he quickly did then Daniel Hudson quickly retired Paul Goldschmidt and Marcel Ozuna for the save. Hudson flew early morning from Arizona to St. Louis as he returned from paternity leave to help his team.