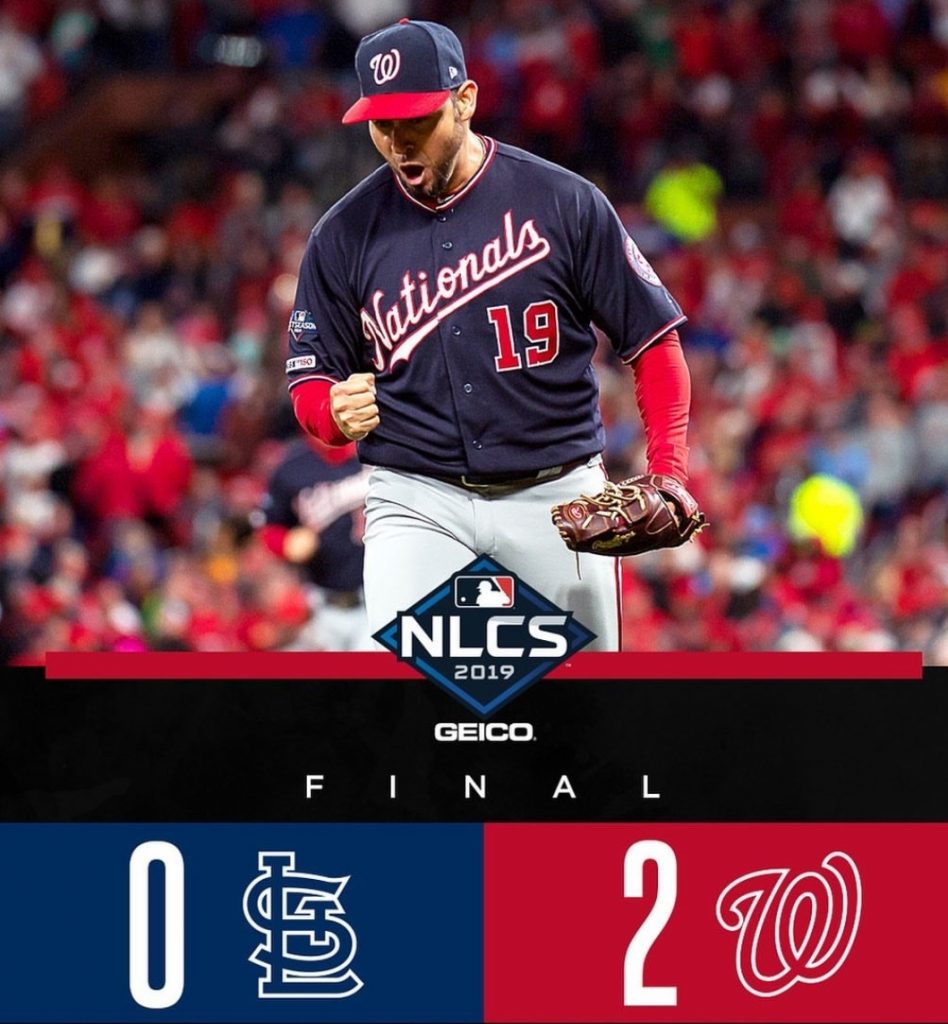 The Nationals shocked the Cardinals to take game one of this NLCS behind a near-no-hitter from Anibal Sanchez that ended with two outs in the 8th inning. Sanchez cruised in this game, and made big pitches when he had to. Manager Dave Martinez pulled him after the hit was surrendered at 103 pitches. In the entire game per Statcast, Sanchez only gave up one hard-hit ball which is measured at contact in play at over 95 mph. In his career, Sanchez has thrown a no-hitter before so he thought he had another when he got a clutch Web Gem from Ryan Zimmerman in that 8th inning on a diving catch that few first basemen could make. Being close still put Sanchie in the history books for the furthest any pitcher has gone in a postseason LS/LCS except for Roy Halladay who finished the only non-World Series no-no.

Once the no-no ended, the game went to Sean Doolittle who completed the 4-out save with perfect timing since Nats postseason closer Daniel Hudson is on paternity leave.

“[Anibal] had a great tempo. A good rhythm, and he pounded the strikes zone,” Martinez said.

The Nationals took this game one on the road in the first two games of a postseason series that is always a key. This sets up the Nats with Max Scherzer on the mound tomorrow to finish the two games on the road before the travel day-off on Sunday when the team heads back to D.C.

It was a key as to how the Floridian and Venezuelan by birth would handle his start in 45°F weather, and Sanchez delivered with a start like you would expect a kid from Wisconsin who the Nats once had pitching a gem in the 2014 postseason in similar conditions. Sanchez had some experience in cold postseason weather from his time in Detroit.

Part of Sanchez’s success is credited to Yan Gomes behind the dish who directed him through this game like an accomplished orchestra conductor. Gomes had only caught Sanchez in four previous games due to Sanchez’s previous relationship with catcher Kurt Suzuki, and Gomes had only caught Sanchie when Suzuki was dealing with a sore elbow, and tonight Suzuki was dealing with concussion symptoms after a HBP on Wednesday hit his wrist and head and that put Gomes into action tonight. Previously, Gomes CERA (catcher’s ERA) when catching Sanchez was an excellent 2.42, and now it is at a stealth 1.87 over their 33 2/3 innings.  Of course good defense always matters, and Zimmerman was they guy who seemed to save the moment to push the no-hitter from 7 1/3 innings to 7 2/3 innings.

“Happy to be out there man,” a jubilant Zimmerman said.

Every potential no-hitter needs at least one immaculate defensive play, and Sanchez said that the Zim catch was what he thought he needed to propel him to the full no-no but it was not meant to be when pinch-hitter and fellow Venezuelan, Jose Martinez, did the dishonor of sorts to Sanchez when he singled with 2 outs in the 8th inning in front of Michael Taylor on a low liner. When Halladay threw his postseason no-hitter, it was Jayson Werth who saved him in that game with a sliding catch. Zimmerman made a catch that looked like vintage Zim from his 3rd base years.

The Nationals offense got the only run they needed early with Howie Kendrick and Yan Gomes, and Kendrick came through on the second run to knock in Adam Eaton who tripled in the 7th inning. Unfortunately Michael Taylor went hitless and stranded six batters, and the Cardinals only allowed Juan Soto one hit while he also stranded six batters. Actually all Nats starting position players had at least one hit except for Taylor.

There was a little side drama when Juan Soto stared down and crotch grabbed as he did his “Soto Shuffle” in a key at-bat with bases loaded at Cardinals starter Miles Mikolas who in turn grabbed his crotch while facing the Nats dugout after he retired Soto.

“I’m just going to laugh about it,” Soto said.

Will the Cardinals pitchers throw at Soto? With veteran Adam Wainwright throwing in game two he could decide to exact some old-school discipline on the 20-year-old phenom by taking a pound of flesh and bulls-eyeing a deep bruise.

Fortunately on this night, Sanchez tamed the previously ferocious Cardinals offense that laid 13-runs on the Braves two days ago.