Game #3 NLDS A team will be up 2-1 after tonight’s game, and that’s a Captain Obvious fact! 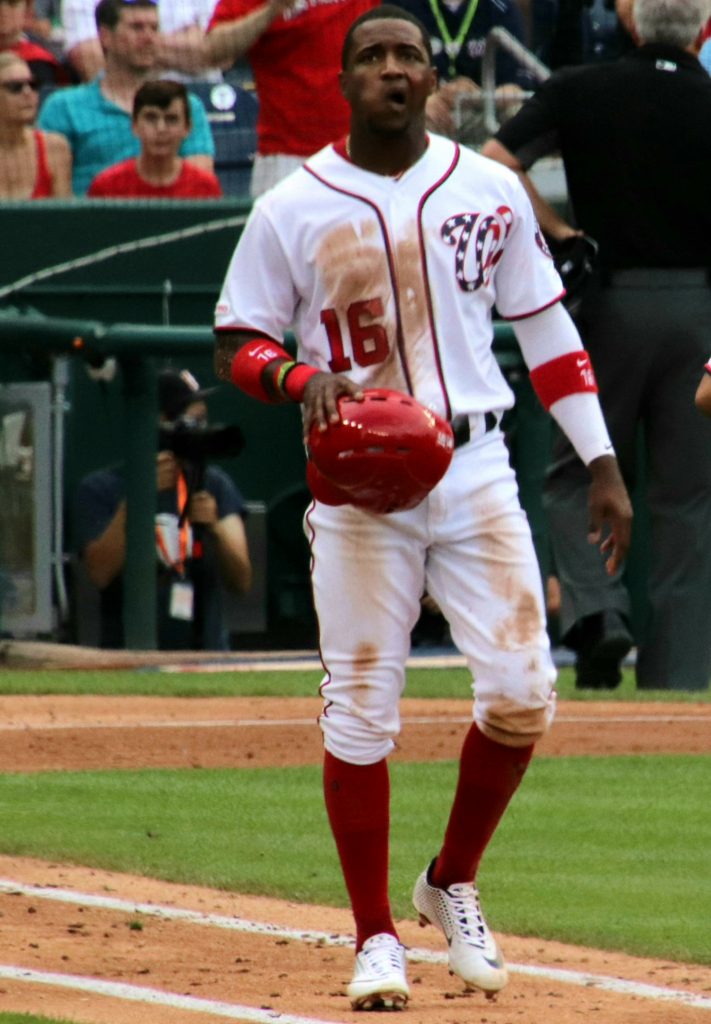 Victor Robles plays hard on every play and now has a tweaked hamstring, but will avoid the IL; Photo by Marlene Koenig for TalkNats

In a series tied 1-1 in this NLDS, the third game becomes the pivotal game that will move one team to a 2-1 advantage, and the other to the brink of elimination at a 1-2 deficit. The Washington Nationals clearly want to be the former and not the latter. A five game series makes each game so key in a short series.  Anibal Sanchez is now officially the starter today, and we await the status of Victor Robles who tweaked his hamstring on Friday.

Source: Yesterday, Victor Robles hamstring was "No se siente bien hoy" which is "not great" which leaves his status up in the air as Andrew Stevenson could be added to the roster if Robles has to go on the IL. #Nats will make decision today. https://t.co/JN0YDxaOA0

A source has told us that he expects Robles to go on the postseason IL and be replaced by Andrew Stevenson unless the MRI shows no damage. Robles did wake up feeling better today. If he goes on the IL, the MLB rules would require Robles to sit out the rest of the NLDS as well as the NLCS, but he would be eligible to return for the World Series. In order to move Robles to the postseason IL, the Nats would need to formally request permission from the Commissioner’s Office to replace a player Robles and that would be granted, but a position player only by another position player and that would be Stevenson.

Source: Victor Robles is currently getting an MRI on his hamstring to determine what the #Nats will do.

Manager Dave Martinez formally named Max Scherzer the game three starter after the first game, but that was before Scherzer pitched in relief late into the evening on Friday night. After game two, Martinez admitted he could start Anibal Sanchez in game three. Good work from @DupontCircleDC, who tweeted us earlier that it was already decided privately that Anibal Sanchez is starting today.

If you go by Anibal Sanchez’s July 26th start against the Dodgers, he was brilliant going 7.0 innings of one run baseball against Hyun-Jin Ryu who went 6 2/3 and gave up one run. For those who remember, that was the Brian O’Nora game where he called Howie Kendrick out on pitches well above the zone with bases loaded. That was also the game that Tony Sipp and Kyle Barraclough combined for giving up three runs in 1/3 of an inning.

Another rant. Manfred has to step up. Barraclough doesn't get the high strike against Justin Turner on pitch 3 that would've made the count 1-2 but Howie Kendrick saw 2 pitches that were higher & both called strikes. WHAT? Howie had to go into swing-mode on all high pitches! pic.twitter.com/3Ojr3twde5

With the lefty Hyun-Jin Ryu on the mound, he has some mixed reverse splits as many lefties hit him well. Each lineup card is a key in these types of games as you look for the smallest advantages.

We will update as news becomes available in the early afternoon. 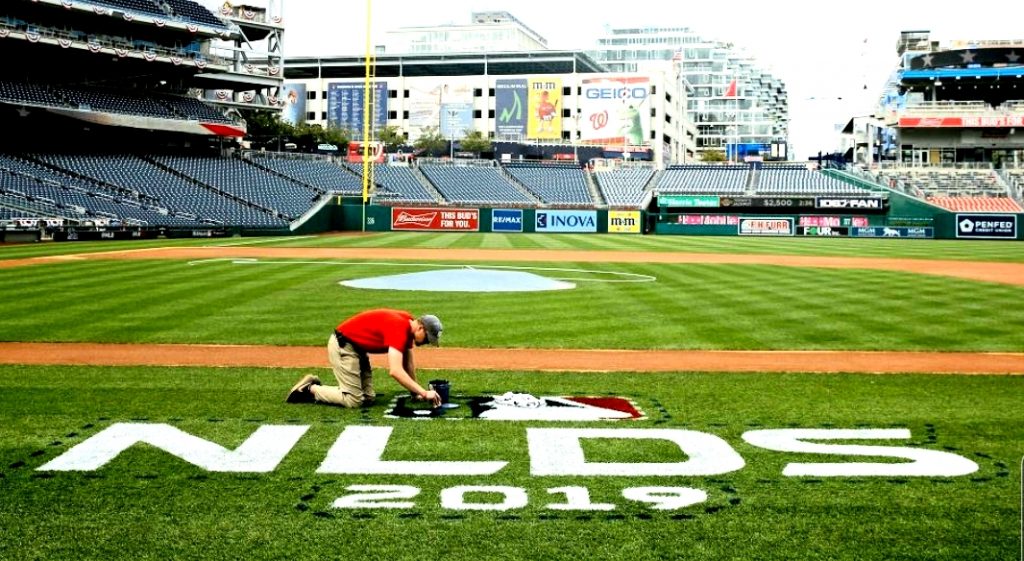 The final touchups have been made to the NLDS logo 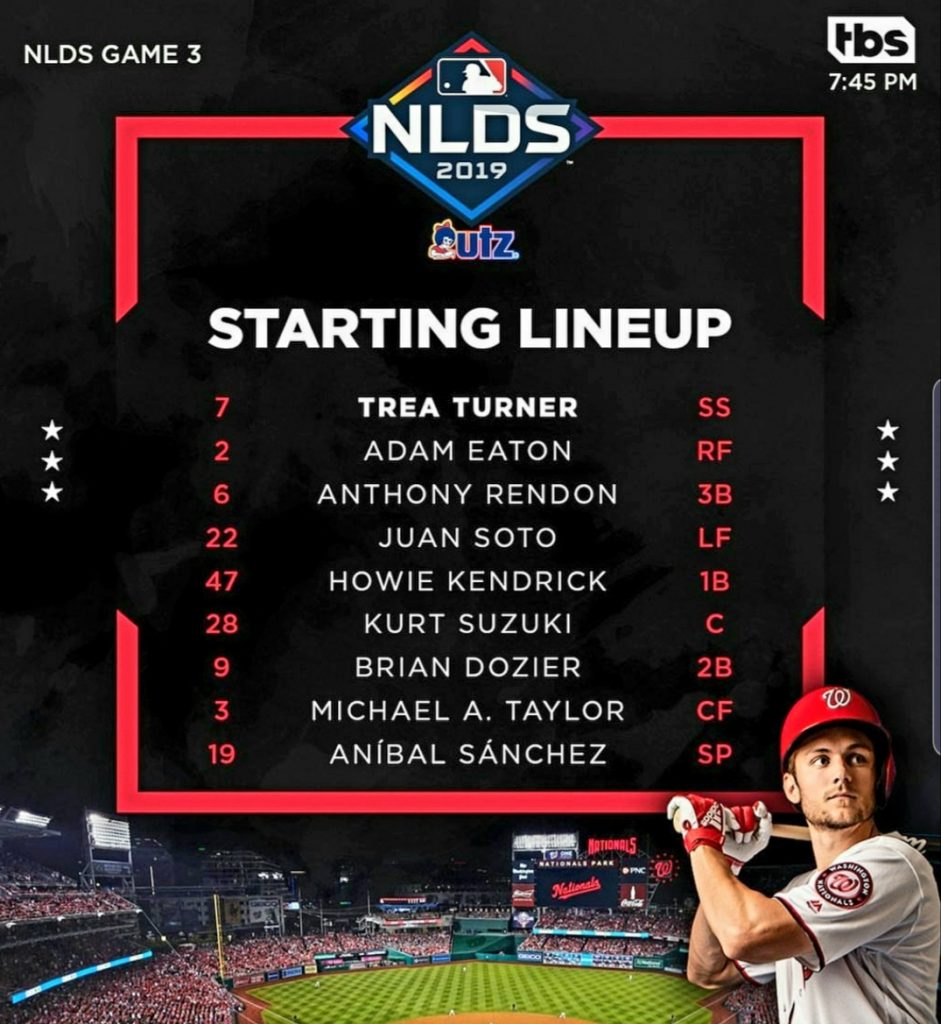