Strasburg joins the pantheon of postseason greats; Hudson gets the big boy save! 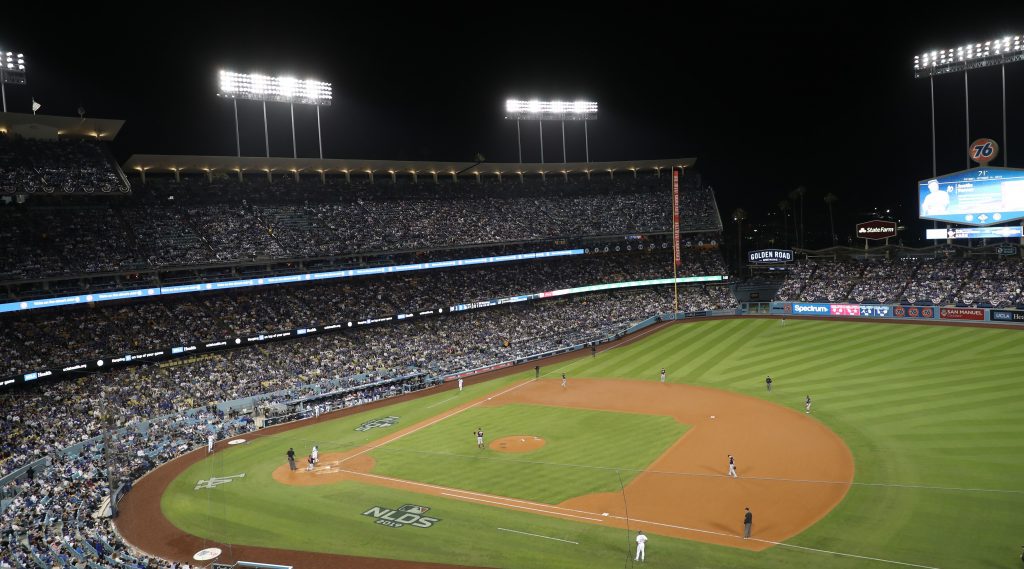 You cannot stress enough how key it was for the Nationals to win this game, and Stephen Strasburg and his teammates delivered a 4-2 victory as the team will fly back to Washington, D.C. tomorrow with the split in the first two games. With this win, Strasburg inserted his name with some of the greatest playoff starters of the last sixty years like Sandy Koufax and Madison Bumgarner.  The Nationals now return with home field advantage as they have games on Sunday and Monday at Nats Park. This game was as close to a “must win” as you can have as you absolutely had to avoid an 0-2 hole which would have made Sunday’s game an elimination game.

“Strasburg was just very electric,” Max Muncy of the Dodgers said. “He was putting pitches exactly where he wanted to. With the kind of stuff he has, when he is able to do that, that’s going to be a pretty good night for them, and not a good night for us.”

It was high drama in the bottom of the 9th inning with bases loaded and two outs as Daniel Hudson delivered the white knuckle save that ended with a strikeout of Corey Seager. One of the anticipated moves was Max Scherzer pitching in this game, and he took the 8th inning as the set-up man, and he was electric as he struck out the side in a relief appearance that was reminiscent of Jordan Zimmermann in Game 4 of the 2012 NLDS. Scherzer was dotting 99 mph heaters and was dominant in a role that he failed miserably in just two years ago but this time Scherzer was prepared for this chance at vindication. It was one of the more creative moves during manager Dave Martinez‘s tenure as the manager — and it worked!

For Max, he was more than a set-up man, he was a bridge set between the two sturdiest foundations that Martinez has in his bullpen which is Doolittle and Hudson. Like any bridge not built well it becomes susceptible to an attack by the opposition just like the Bridge Over The River Kwai. Doolittle-to-Scherzer-to-Huddy was built well and survived the attack. Put an “H” next to Doo’s and Max’s name in the boxscore and the “S” next to Huddy’s, and of course a “W” next to Strasburg’s. Those singular letters mean a lot to pitchers, and tonight each really earned it.

“I talked to Max before the game,” Martinez said. “Today was his bullpen (side-session) day. We held him back. He said he was good to go. I told him that, and I specifically told him that I will not use him in the ninth. But I would have to probably use him in the bridge [for] the sixth, seventh inning.”

Sean Doolittle had the 7th inning and gave up a run on a Max Muncy home run which prompted manager Dave Martinez to walk Muncy in the 9th as the tying run in another out-of-the-box move when Hudson took the mound for the save.

“It was a little more than I wanted right there,” Hudson said. “That’s a really good lineup there.”

The Nationals bats woke up from the start of the game as Trea Turner led-off with a double and scored on a Howie Kendrick single. In the second inning, Adam Eaton knocked in Victor Robles who happened to exit the game with an apparent leg injury as we tweeted earlier was due to some hamstring discomfort. Anthony Rendon got off the schneid and drove in Eaton with a double. The Nats scored their last run in the 8th inning on an Asdrubal Cabrera pinch-hit double to score Ryan Zimmerman who had a lead-off double in the inning.

After two days of rest from his Wild Card game 3-inning relief appearance, Strasburg pitched a gem. He went 4 2/3 of perfect baseball, and then finished with 6.0 full innings with 10 strikeouts and only 3 hits and 1 earnie. His postseason ERA is now only 0.64, and he now has two wins in this postseason!

“Pressure is a funny thing and something you have complete control over,” Strasburg said.

Speaking of pressure, sometimes a manager can go against the book and put the pressure on himself and take it off of his pitcher like manager Dave Martinez did for his closer Daniel Hudson when he put up four fingers to intentionally walk Muncy. If that did not work, all fingers would have been pointed at Davey so since it worked — let’s make sure we credit DMart. What also worked was skipping Scherzer’s side session on Friday so he could give Davey and inning tonight, and it worked perfectly.

The Nats will head back to D.C. tomorrow and spend the night in Los Angeles and then get ready for the game on Sunday which will matchup Hyun-Jin Ryu and Max Scherzer if he feels 100% otherwise it will be Anibal Sanchez.