The losing streak ends at four! #Nats batter the Braves on getaway day!

Posted on September 8, 2019 by SaoMagnifico 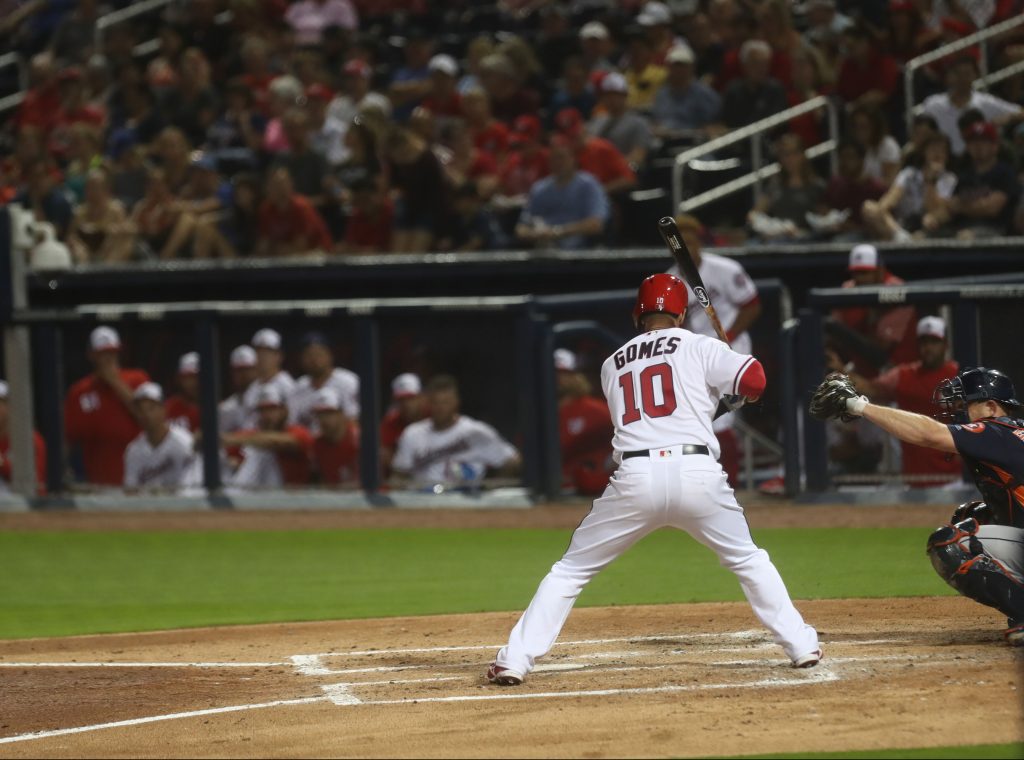 Yan Gomes homered twice today and did an outstanding job handling a pitcher he doesn’t catch much. (Photo by Sol Tucker for TalkNats)

It’s September. The divisional race is probably over. The wild card race has narrowed substantially. The Washington Nationals entered Sunday’s game on a four-game losing streak and staring ahead at three straight series against division leaders. They needed a big game from their ace. They needed an overdue outburst from the offense. 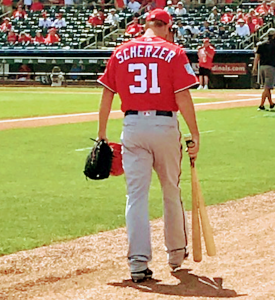 Max Scherzer did it all today with his arm, his glove, his bat, and his legs! (Photo by Lynn G. for TalkNats)

All Max Scherzer did today was strike out nine over six innings of one-run ball, plus single, steal a base, and score a run in the seventh inning. The bats came alive early as the Nats blasted off three times against Atlanta Braves rookie Mike Soroka, scoring twice in the first inning on a home run by the convalescent Adam Eaton. Even light-hitting catcher Yan Gomes, who doesn’t normally catch Scherzer’s starts but was the first choice today with Kurt Suzuki ailing, got in on the action. Gomes homered off Soroka and then again off reliever Chad Sobotka, both deep line drives to left.

Aside from those key home runs, you can circle one big moment in today’s game when the Nats (to be exact, their starter) stepped up in a way they haven’t lately. Scherzer got himself in his worst trouble of the game in the fourth inning when he got ahead of Josh Donaldson 0-2, then walked him as he nibbled around the edges of the strikezone; then he gave up a booming double to Matt Joyce, who had the Braves’ only hits (and run) off Scherzer today. But he buckled down and struck out Dansby Swanson, then Tyler Flowers, to end the threat.

Trea Turner got himself thrown out of the game when he turned around to argue with home plate umpire Mike Estabrook over a called third strike in the fifth inning. Chip Hale ended up managing half the game as Davey Martinez was run immediately thereafter. Estabrook is known for having a quick trigger finger as an umpire who ejects his share of players and coaches, and Turner pushed his luck and got himself ejected from a crucial game. Wilmer Difo played the rest of the game at shortstop, notching his first major league hit since May 14 on an eighth-inning doink over the head of his Braves counterpart, Swanson.

It was Hale who wisely decided to sit down Scherzer at 98 pitches before the bottom of the seventh, with the Nats up by seven runs — even after Scherzer hit for himself, stole second, and scored on an Eaton base hit that got past Braves first baseman Freddie Freeman. Scherzer’s last batter retired was Donaldson, who lined out to the pitcher as Max made a nifty no-look pick at the belt.

Wander Suero pitched around a two-out walk for a scoreless seventh. Javy Guerra retired the side in order in the eighth but gave up a solo home run to Charlie Culberson in the ninth. Culberson now has more than one-third of his 23 career home runs off of one team, and that team is Washington. Guerra then gave up back-to-back RBI knocks to Francisco Cervelli and Adam Duvall before finally retiring Billy Hamilton on a popup that almost saw Difo and Adrian Sanchez collide on the infield.

The Nats win 9–4 and will have Monday off before opening an interleague series against the Minnesota Twins. To add to the sweetness of the victory, the white-hot Arizona Diamondbacks were cooled off today by the Cincinnati Reds, who walked off on a double by reliever/pinch-hitter Michael Lorenzen, and the Nats padded their wild card cushion back to 4.5 games.