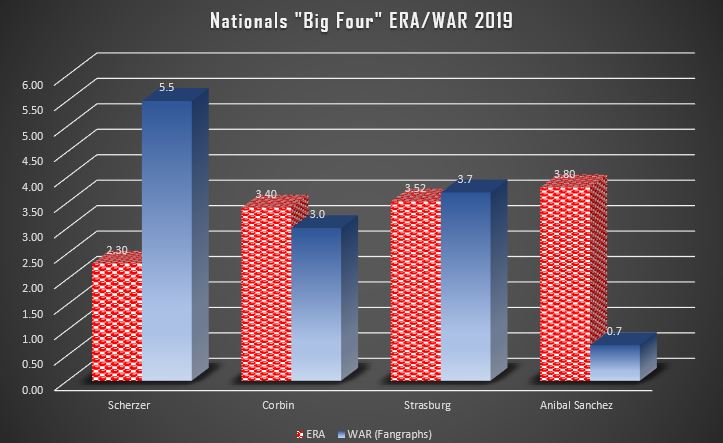 The Nationals ace of aces, Max Scherzer, remains on the 10-day IL although manager Dave Martinez was optimistic that Scherzer would return this week. He has now missed two starts which included the Sunday start out of the All-Star break in Philadelphia which ended in a loss, and then the Nationals were looking to start Scherzer  yesterday which was filled by Joe Ross and ended in a loss. In the last 10-games, the Nats are 6-4 which included three bullpen losses and the Joe Ross loss last night. That is still .600 baseball, but this team is making up for lost time.

To complicate matters, Austin Voth was placed on the 10-day IL with biceps tendinitis and the Nationals opening day fifth starter Jeremy Hellickson remains on the 60-day IL with shoulder pain. With Scherzer and Hellickson missing, they have used several pitchers like Voth, Ross, Kyle McGowin, and Erick Fedde. The issue now is the rotation has been Stephen Strasburg, Patrick Corbin, and Anibal Sanchez plus TWO replacement pitchers to round out the rotation. Truth be told, Hellickson had a poor season before he was placed on the IL. The 32-year-old has a 6.23 ERA and the Nats are 3-6 in games he has pitched. No bueno.

The Nationals “Big Four” could arguably be the four best starters in baseball on one team. Max Scherzer has the second best ERA in baseball trailing only Hyun-Jin Ryu. Corbin is 26th in ERA in the Majors followed by Strasburg at 29th, and Anibal Sanchez is 42nd.  With 30 teams in the Majors, it is as if the Nats have three number 1’s and a number 2. The issue is the Nats number 5’s are not getting the results.

At this point, the Nationals are 52-46 with only 64 games remaining on the schedule. The big issue is the disproportionate losses from the #5 pitchers where the team is 8-13 which is a .381 winning percentage, and while that might work for some teams, the Nationals need to turn that around. In total, all Nationals starters rank third overall in the Majors in starters’ ERA at 3.53, but the number 5 starters combined ERA is 4.996 as they have surrendered 57 earned runs in 102.67 innings.

With the July 31st trade deadline just 9-days away, general manager Mike Rizzo needs to upgrade the bullpen while also looking to upgrade the #5 starter’s spot although credit to Erick Fedde as he has a 3.52 starter’s ERA. The issue with Fedde is that he has not fared well against some of the top offensive teams while also not going deep into games.