Umpiring and technology and pay the best 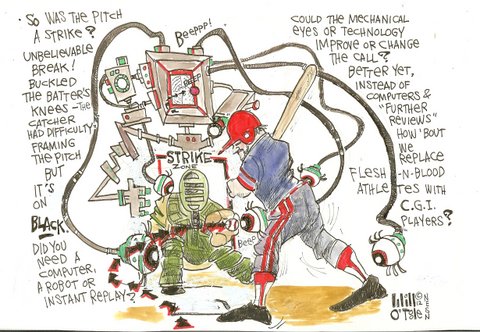 In recent years, there has been more clamoring by many critics for MLB to do something about the Homeplate umpiring that has seemed to get worse yearly in accurately calling balls and strikes. Whether or not that is accurate or just based on recency bias can be debated, but there seems to be ball and strike mistakes that are critical in some games that should concern MLB. The game should be free of bias as well as total incompetence, and the technology should be accurate enough to use or at the very least more accurate than the human element. Tennis adopted the Hawk-Eye system to decide challenges after a succession of blown calls in a 2005 tournament enraged players and fans. Hawk-Eye Smart Replay® is actually used by MLB teams to review plays in their internal decisions of whether or not to challenge a play.

Look no further than to the Nationals last loss five days ago when Austin Voth was facing Alex Gordon in a close game that went to extra innings. Voth painted two pitches on the top and bottom of the zone. Both were called as balls and Gordon walked and turned a 2-1 game into a 4-1 game. The Nationals later tied it up, but the game was affected by one pitch that would have certainly been strike 3 instead of ball 4. That game was tied up by the Nationals 4-4 and went into extra innings, but if that call was made accurately on Gordon it is possible the game would have stayed at 2-1 and the Nats win 4-2. 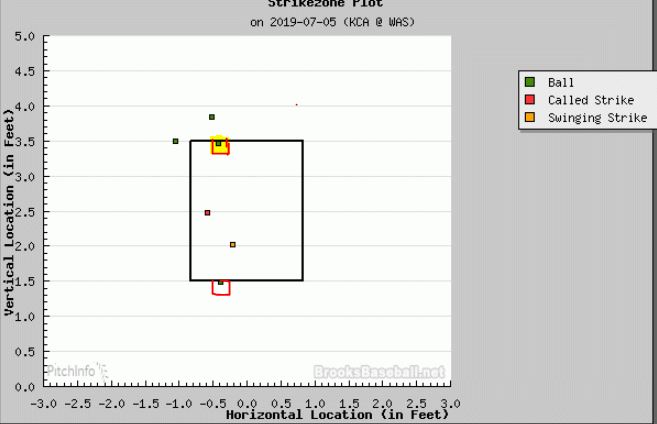 The highlighted pitch would have turned this at-bat from a walk to a strikeout with Robo-ump. Graphic from Brooks Baseball

No one would love Robo-umps more than me. However, because of the MLB umpire union’s stronghold on the MLB umpiring landscape, that method for umpiring might be something that we will never see in my lifetime.

So as an alternative, I suggest something completely different that might work. Let’s pay the umps more. No not bribes — their actual salary. A larger salary. Presently rookies earn $120,000 and vets can make up to $350,000. They also get travel expenses and eating per diems. I would like to double the pay. You do not need to double the per diem, but as a good will gesture increase it 10%.

In return each game will be listed in the box score with how accurate the non-swinging pitches are called. The umpires union can choose which method they want to use. Either PITCHf/x or Statcast, or something that might be newer, however all with evaluated by the same method.

At the end of the season the umpires who score in the top 90% are retained for the following season with a cost of living raise of 5%. The bottom 10% are optioned back to AAA, and are replaced by the best 10% at that level. Just like major league players, they need to perform at a higher level not to get optioned.

“Change back to optical [sensors], with redundant systems [for robo-ump],” said Harry Pavlidis, director of technology for Baseball Prospectus and the founder of Pitch Info. “Redefine the top and bottom of the strike zone so it’s not arbitrary in terms of time. And test out the notion of a fixed zone; it would hopefully be no big deal that suddenly there are many more 3-0 walks and 0-2 punchouts, but we’d have to see how the game is impacted [to get robo-ump right].”

The umpires may choose to retire if they wish instead of being optioned, but they will not umpire in the majors the following season. They can earn their way back though by being in the top 10% in AAA the next year.

Some or maybe most umpires will not like this portion of the proposal, but good umps would love to make double the money for doing something they are good at. I think the union would like it as a whole. Only bad umps would hate this.

A side note, if you are in the bottom 10%, but you scored over a 95% accuracy rate you are exempt from going down. A university of Boston professor says that 85% is the present average, so if we actually get them to the 95% level umpiring complaints will almost disappear.

By posting the score nightly, MLB, the umps themselves, the players and managers, and we the fans will see the scores. We can track the good ones from the bad ones. Not just using our eyeball test anymore. I think once some umps see that they are below standard, they will work their rears off to improve.

Improving umps should be the goal anyway. They also can give out awards to the top 10 umpires. Starting at $100,000 and decreasing $10,000 per position until you get to number 10. I am not sure if I am the only one who wants to see something done. However I do realize my robo-ump idea seems to rub to many the wrong way, but keep an open mind to change. The Austin Voth situation where a rookie was going up against a veteran player (Alex Gordon) should not give that veteran the advantage of a different strike zone than Trea Turner received by the same umpire in that same 5th inning that resulted in a strikeout instead of a walk. Two different at-bats, same umpire, same inning, but different results. Something has to change.