Max Scherzer’s month of June was vintage Max in charge! What changed? 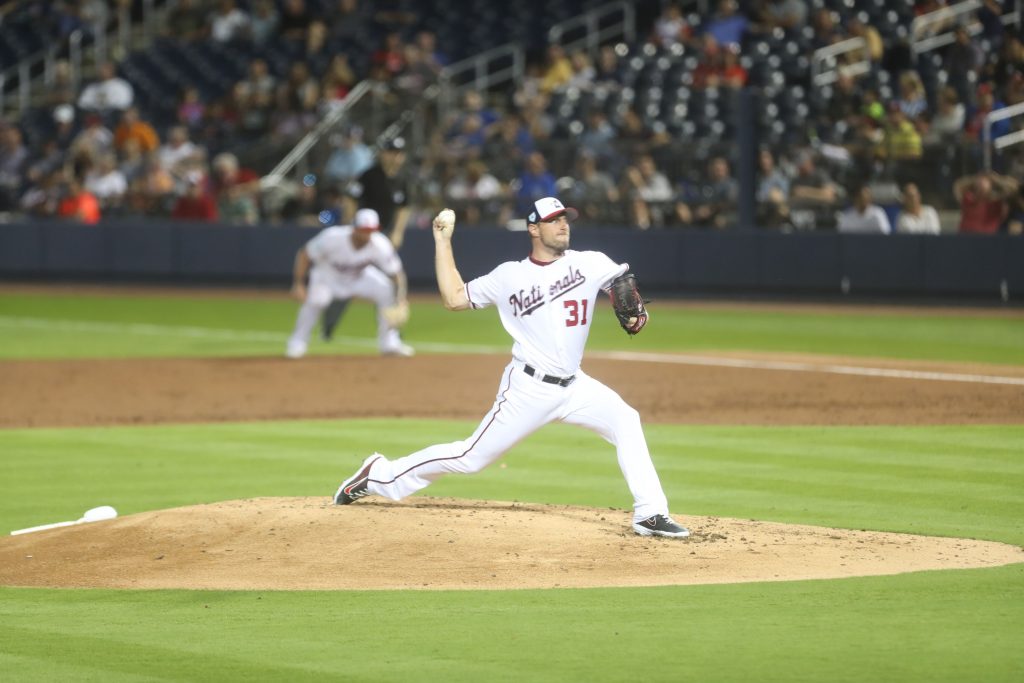 Forget the broken nose and the black eye, the June transformation of Max Scherzer went from a disappointing losing record through May to a legend in June. The team was an horrific 2-10 in Scherzer starts through the end of May, and in June, Scherzer has controlled his own fate as much as a pitcher can — and he has now factored into every decision in June going a perfect 6-0.

Pitchers still have to rely on other factors such as run support, bullpen pitching, defense, defensive positioning, umpiring, and of course the luck factor because the pitcher can only control the pitch type, velocity, and pitch location. As much as anything, Scherzer went deeper into games in June because he found pitch efficiency allowing him to rely less on that bullpen and more on himself. While his run support is slightly better in June, no pitcher has ever won a game where his team scored zero runs, and that was the case on Opening Day for Scherzer, and there have been other games where the lack of run support was evident. Yesterday’s game is a perfect example of Scherzer taking low run support of 2-runs and going 8.0 full innings, and he only had to rely on the bullpen for one inning in the form of closer Sean Doolittle who secured a 2-1 win for Scherzer.

In the eleven starts Scherzer made in April and May he averaged exactly 6 1/3 innings and relied on a bullpen that had an 11.71 ERA in his games to that point. On average, they relieved for him to close out 2 2/3 innings through May. That resulted in five bullpen losses in those eleven games. Compare that to his June starts, Scherzer averaged 7 ½ innings per start and only relied on 1 ½ innings from that bullpen and the bullpen only yielded 2-runs over the 9 innings they covered for him. Scherzer averaged 14.4 pitches per inning in June which kept him pitch efficient to control his own fate and rely less on that bullpen compared to 16.5 pitches per inning in those other dozen starts. Those extra two pitches per inning added up and was really the difference in one fewer inning per start.

Statistically and by common sense, there was no way that the Nationals should have been at 2 wins and 10 losses in Scherzer’s twelve starts through May especially considering he had a 3.26 ERA. Scherzer has only had one bad start this season when he gave up 6-runs, and in his second worst start he had an 11-run lead when he exited with a 12-4 lead and earned his first win of the season. In those other ten starts by Scherzer through the end of May, he had given up 3-runs or less, and in seven of those ten starts he had  given up 2-runs or less. Those are some phenomenal stats and Cy Young worthy before you add in his incredible month of June where Scherzer only gave up more than 1-run in one of his six starts, and his final ERA for the month of June was exactly 1.00 bringing his ERA for the season down to 2.43.

So what had gone wrong in the Scherzer starts through May? Answer: Everything.  From defense to the lack of offense and meltdowns in the bullpen, it had all plagued Scherzer in those other starts. In his last start in May, the defense gave up two unearned runs in the bullpen part of the game turning a 2-1 win into a 3-2 loss. In that game, Scherzer knocked in one of the two runs! The lack of offense for Scherzer was averaging 3.2 runs of support per start through the end of May, but that was skewed since he got 12-runs in one game and 5-runs in another game, and those are his only two wins of the season he had to that point. Otherwise, Scherzer has averaged 2.1 runs per game in support. The other issue is that once the bullpen had taken over in those games through May, they allowed 40-runs to cross the plate in those games compared to just two runs in the entire month of June in Scherzer’s starts. Before, the bullpen was giving up more runs on average than Scherzer was receiving in run support. As a fierce competitor, it was clear Scherzer was not happy.

“It’s frustrating. You reflect on the things you could have done to help the club more,” Scherzer said.

If you take Scherzer’s 12 starts out of the mix through May, the Nationals are 40-31 which is 9-games above .500!  Why were the Nationals under-performing in Scherzer’s first twelve starts? That is all part of the enigma that the first two months of the season were.

If you look at ERA, Scherzer was at 3.26 through the end of May because of that 6-run outing. Without that blowout start, Scherzer had a 2.75 ERA which would put him almost exactly where his ERA is for his entire Nats tenure (2.67). If you look at advanced statistics, his FIP is the best in the Majors at 2.09 and it was 2.35 through the end of May. FIP tries to neutralize poor defense, and it is clear that something had gone awry in Scherzer’s batting average against. Too many balls found green outfield grass. Scherzer’s BABIP leading into this game that last game in May was .358 while his prior Nats seasons had him at .248 to .273. Now his BABIP is down to .247 for the month of  June! That is the rest of the mystery. There would seem to be some reasons for the decline including the defense behind Scherzer while there were many starters on the injured list.

Earlier in the season, some of the long pitch counts to batters seemed to lack that put-away pitch. We only saw one such at-bat like that yesterday. In the past, Scherzer credited the other batters when maybe it was more about him controlling the situation.

“They did a great job of grinding me and just fouling balls off,” Scherzer said.

For Max Scherzer, he is always a student of self-improvement and a tireless worker. He knew his underlying stats and that his hard hit rates have increased overall from 28.6% in 2018 to 37.7% this season according to Fangraphs, but Scherzer has decreased the hard hit rates in June by almost 3%. Overall, it is still the highest rate in his career, but trending in the right direction now. Also, Fangraphs rated his changeup as a +1.75 last year and now as a -0.97 but it was a -2.33 through May so he actually had a positive changeup in the month of June. Scherzer’s curveball is now a +0.47 for the season which also improved from a negative. Again, the June trends have shown quite the improvement in the quality of his secondary pitches, and that has helped to bring down his pitch counts, and the hard hit rates.

Max Scherzer is an MVP candidate. He won’t get it, but he has single-handedly willed his #Nationals team to turn their season around. He is the most inspirational player in baseball. In June he went 6-0 with a 1.00 ERA. The Nats were 19-31 on May 23 and are now 42-41.

There is no more talk of frustration from Scherzer as he can now talk about the positives and looking forward to better things ahead.

“Just in rhythm,” Scherzer said of the month of June. “Rhythm with my mechanics and have the shape of every off-speed pitch, all five of ‘em really. To be able to execute them where I want to. Not trying to make mistakes with ‘em, execute where I want to and then, when I can sequence, it gives [ Kurt Suzuki] the ability to call anything and we can just game plan.”

“We know what we want to throw when we want to throw it. The great thing that’s been described as rhythm is there’s times when I’m on the mound, and I’ll be thinking, ‘This is a great time for this pitch,’ and then Zuk just calls it, and I don’t even have to shake to it. That’s kind of the rhythm that we’re in, just us both, how we’re able to attack a lineup.”

Before there was Sabremetrics, you would be what your ERA said you were and just debate the eye test, but as you can see there is so much more to the dynamics. Scherzer right now is the best pitcher in all of baseball, and now carrying his team to do what no team has ever done before!

This entry was posted in Analysis, Scherzer. Bookmark the permalink.
← Previous Article | Next Article →