For a team 3-under, the Nats are in a good spot! 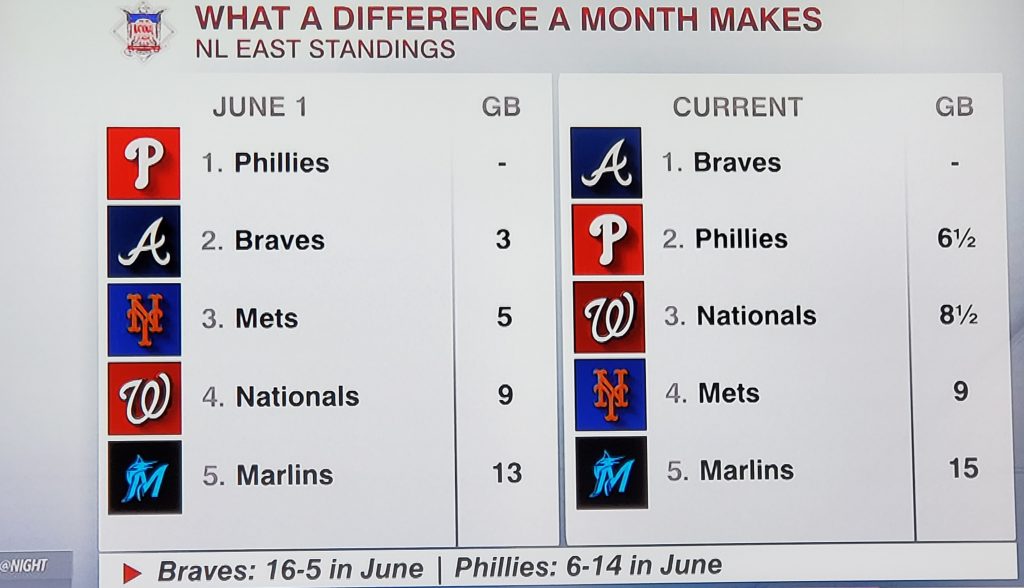 Sure you want to head on a road trip with a win, but a 5-2 record in the last seven games with a sweep of the Phillies tucked into those numbers has to feel good. Those two losses were both tagged on the bullpen which is so mid-April. That has to be cleaned up. The Nats bullpen ERA is 6.29, and the Nats bullpen is still the least used in the Majors at 230 1/3 innings. Maybe the issue is usage? Not according to the stats. Wander Suero leads the Nats in innings at 32 1/3 innings which ranks him 60th in the Majors. There are relievers who have logged over 50 innings and ten over 40 innings. In games played, Alex Claudio has appeared in 42 games and Matt Grace ranks 17th with 35 appearances.  This is bullpenning in today’s baseball.

Like it or not, relievers are covering more of the load than at any time in baseball history. The Nats are not one of those teams as a unit, but they have needed to push on them harder lately because of the Wednesday doubleheader. Tanner Rainey pitched in four of the last five days and 86 pitches. That is a lot of mileage on his odometer. Part of the issue is that Rainey has not been pitch efficient, but the other part is his manager has to know he had other options for the 10th inning.

The good news is the Nats have a day-off.  Everyone can rest, and with the Max Scherzer,  Patrick Corbin,  and Stephen Strasburg pitching the next three games, hopefully the bullpen will not be needed as much. The schedule has three games in Miami which is a pitcher’s park, and then three games in Detroit where the pitchers do not have to bat. The Nationals then come home for a six game homestand leading up to the All-Star break with games against the Marlins and Royals.  The Nats will play all teams the next two weeks projected to lose 95+ games.

The Marlins just swept the Phillies, and the Royals beat the Twins. There are no freebies, but the Nats must dominate these teams before the mid-summer classic. The Washington Nationals have those dozen games to improve on their 37-40 record and get above .500, and make their move in the final 85 games in the season.

This entry was posted in Analysis, Uncategorized. Bookmark the permalink.
← Previous Article | Next Article →