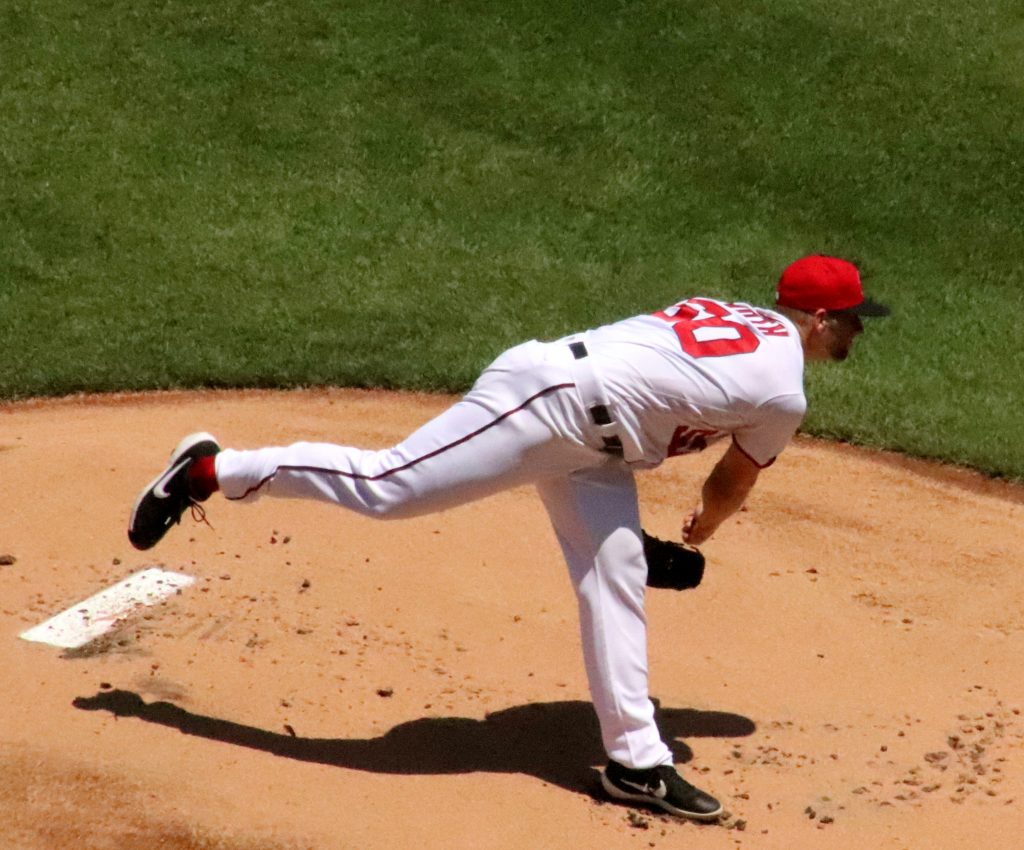 When you pitch 6.0 innings of 2-run baseball that included an unfortunate wall-scraper home run against the “hot” Atlanta Braves, you open some eyes, and Austin Voth grabbed a chair at the adult’s table and sent Erick Fedde packing. The Nationals announced today that they optioned Fedde back to the minor leagues and will add another player tomorrow when the team plays in Miami. That head table only has five chairs, and Voth will stay as long as he produces. He will join a veteran and vaunted rotation of Max Scherzer, Patrick Corbin, Stephen Strasburg, and Anibal Sanchez, and Voth will pitch after Sanchez in the spot vacated by Fedde. That would put Voth on the schedule for starting on Saturday in Detroit.

The Nationals team ERA for the starting pitchers is 3.83 which is 4th in the NL, and they are tied with the Marlins, and Reds for the second best BAA (batting average against) at .237. With a few more good starts by Sanchez and Corbin they should get below that 3.83 line of demarcation — although that line is always moving.

The Nationals starting pitching numbers are certainly trending in the right direction, and the team has already had their annual trip to Colorado and some of the other hitter parks like Cincinnati, Milwaukee, and the Nats have already played two-thirds of their games in Philadelphia for the season with only three remaining games there.

Consider also the Nationals improved defense which is trending in the right direction.  During much of April and May, they were receiving criticism for poor defense. In fact, during April and May, there were 22  unearned runs allowed (.38 per game), and since then, there has only been 3 unearned runs allowed (.15 per game). Just in the past week the Nationals have been featured in Top Plays on ESPN and MLB Network for run saving plays by Victor Robles and Trea Turner that would have pushed earned runs across the plate.

The FIP (fielding independent pitching) rank for the starting pitchers for the Nats has them at third in all of baseball at 3.85, an indication that the rotation is pitching almost exactly where the defense is now as you compare it to the 3.83 starter’s ERA.

The pitching staff is also acclimating well to their new pitching coach, Paul Menhart, who has been in his new position for only 53 days. How much of the credit should go to Menhart is part of the intangibles.

“The arms that we’re throwing out there every day are going to give us a really good chance to win on a daily basis,” Menhart said.

One of the other decisions that has impacted the defense is the use of “cheat codes” and we are not referring to those codes that video game junkies purchase to advance in a game. These are the codes for positioning the outfielders.

You have probably noticed they have been playing Victor Robles deeper and Juan Soto plays at a near “no-triples” depth much of the time, and it has been paying dividends. It used to be called “no doubles” defense where corner infielders would guard the line and play your outfielders near the warning track, but the Nationals call it “no-triples” for their outfielders and it has different meaning for the more “fleet of foot” Robles than Soto and Eaton. To lead-off the game over the weekend, Ronald Acuna of the Braves sent a ball towards the visitor’s bullpen wall, and Soto ran a few yards and caught the baseball near the top of the wall saving at least a double and most likely a triple.

Other teams have taken an analytics approach to outfield positioning while willing to give up singles but eliminating XBH (extra base hits) by not allowing balls over their outfielder’s heads. Soto’s positioning is an extreme example with his depth, but you have to believe Menhart and manager Dave Martinez signed-off on the idea as the analytics department gives them the daily cheat codes based on each starting lineup and bench player.

Good defense translates into improved pitching and lower pitch counts and lower stress innings. All of the outfielders now carry the laminated “cheat code” cards to assist them in positioning for each player, and the Nats call it NT on the card for “No Triples” which is the depth that Soto was playing Acuna. Nationals third base coach Bobby Henley has double-duty when he returns to the dugout he has the additional responsibility to hand signal his outfielders for fine-tuning, but the “cheat code” cards do most of the work now.

The middle infielders are very astute on reading the catcher’s signs to position themselves further which shortstop Trea Turner credits for being able to reach many of the groundballs as he looks in for the signs and adjusts accordingly. The Houston Astros have used this system for years which they call defending to their pitching. Of course the pitchers have to execute, and the batters have to hit to their most predictive spray chart locations. The Nationals do not over-shift like some teams do in extreme shifting, but the subtle changes have been working. 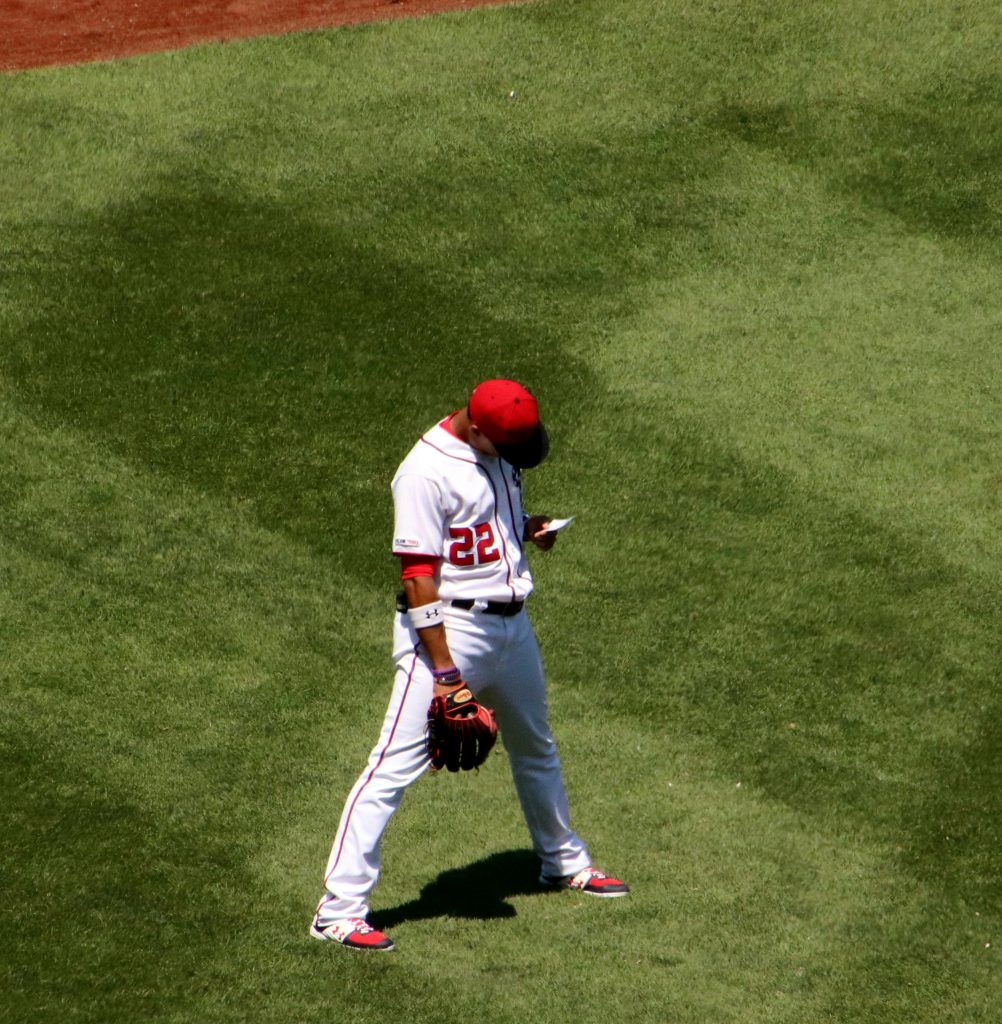 All in all, expect the starting pitching to show additional improvement, and the next time you see something like that catch that Victor Robles made on Friday night against Charlie Culberson to the opposite field you can give credit to the cheat code of OPPO•5 SH which is 5 steps over and play shallow. It worked and if you do not remember — watch the replay for that first out on Friday night in the 9th inning. That hard liner went right to Robles and froze two runners on the bases, and the same positioning made it possible for Robles to end the game on Dansby Swanson on the pop-up into the “Bermuda Triangle”. Analytics works with great execution.