Patrick Corbin did not have it again 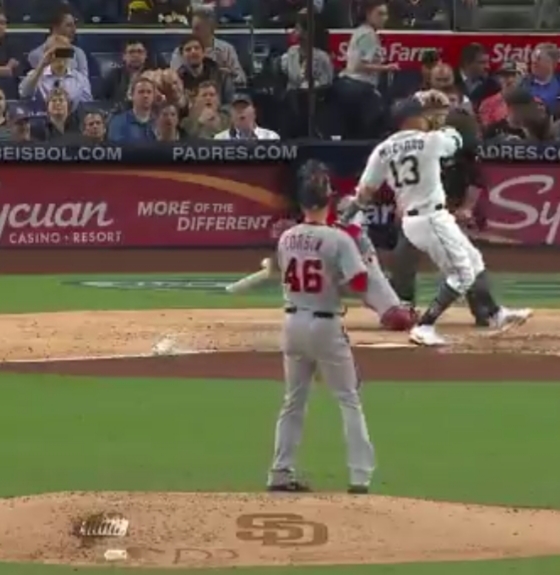 The game started off with a bang and ended in a whimpering loss 5-4. The 4-0 lead that starting pitcher  Patrick Corbin was handed before he ever took the mound in the bottom of the first  inning evaporated quickly. Corbin was not sharp again. While he was only charged with 3 earned runs after a costly error, the five walks he surrendered killed him in this game. The lefty barely lasted 5.0 innings as he labored through a 101 pitch count as his fastball was not located most of the outing.

The Nationals offense did not take advantage when they had Joey Lucchesi on the ropes after their first inning onslaught, and the Nats could not touch the Padres bullpen.

If you want some positive news, the Nationals bullpen was very good yielding only one-hit and no runs after Corbin departed. Tony Sipp, Javy Guerra, and Matt Grace allowed Wander Suero,  Tanner Rainey, and Sean Doolittle to rest. For the offensive highlights, there were not enough in this game beyond Howie Kendrick‘s two run single and Brian Dozier‘s two run homer that he crushed into the Western Metal Supply warehouse.

Unfortunately, the Nationals modest 4-game winning streak came to an end. The Nationals never scored after the first inning in this game. Hopefully this was just a temporary setback for a team that was on a roll. The real concern should be about Patrick Corbin who has not looked good since that 116 pitch complete game shutout. The team did not pay their $140 million lefty to falter like this at the most critical time especially since he is getting runs support.

“Just looking forward to my next bullpen [side-session],” Corbin said. “To be able to go out there and try to work on it and get better.”

The fans have heard this before from every starting pitcher who has struggled. Dan Haren and Doug Fister and Gio Gonzalez and Tanner Roark. We don’t have to dig into the history books to tell you how that worked out. This was Corbin’s first start since that 8-run 2 2/3-inning meltdown in Cincinnati. He has effectively been on both ends of the losses in between promising winning streaks. If his last two starts were won the Nationals would currently be on an 8 game winning streak going into Friday’s game. This feels very reminiscent of what the Nationals went through in prior years with other pitchers and you can’t let it snowball.

“Walking five guys, I don’t know if I’ve done that before,” Corbin said.

We can give you some history Patrick if you really do not remember. You have done that before and the last time was August 6 of 2016. The start before that game you threw a season high 108 pitches and then you melted down for two starts in a row and walked those 5 batters and your manager, Chip Hale, put you in the bullpen for the remainder of the season. Do you remember that? Small world. Yes, Chip Hale was his manager in 2016 when he last issued 5 walks in a game. For those who do not know — Hale is the Nationals current bench coach.

“He was disappointed,” Chip Hale said in August 2016 when asked how Corbin took the news of the demotion. “He understands that his pitching and his performance hasn’t been good enough to stay in the rotation, quite frankly. He understood that this was a good way to work some things out, get in some non-pressurized innings and be able to do some things to work on stuff.”

Nobody is suggesting putting Corbin in the bullpen, but there have been patterns before that maybe some extra rest will help.

“His mechanics are a little off right now, causing him to fly open a little bit,” manager Dave Martinez said. “I think he knows that. He said: ‘I’ve just got to start locating my fastball.’ Which is true. We’ll get him straightened out.”

The mechanics seem off sometimes as pitchers reach-back for extra velo on their fastballs. Many times it is from arm fatigue, and sometimes it is mechanical. Only Corbin knows the real truth. Gio Gonzalez went through this last year after throwing four consecutive games of 110+ pitches. He went from a Cy Young contender for the first two months of the season to a pitcher who needed a break from baseball. The Brewers figured out quickly when he was traded that less is more with Gio. The Diamondbacks figured that same formula with Corbin last year.  He never threw over 108 pitches last year and the only start they pushed him in was before the All-Star break when they planned to rest him afterwards. The Nationals have already pushed Corbin in games where he has thrown 108, 116, and 118 pitches in games, and we are not even 40% through the season.

“You just kind of feel your mechanics, and you’re able to go out there and do it,” Corbin said. “I just fell behind [batters]. I wasn’t throwing strike one. I was trying to be too perfect there when I was behind instead of attacking their hitters with everything that I have. I’ll just try to learn from that.”

Time to show us instead of telling us Patrick, and maybe if your arm is tired, you come clean and tell your manager. If it is mechanical,  we will see you in Chicago on Tuesday, and expect that you will have fixed your mechanics.