Game #43 Anibal Sanchez is called on for the series win!

When Mets killer Daniel Murphy departed D.C., the Washington Nationals needed a replacement to torment the Mets, and the rookie Victor Robles has stepped up admirably to be that role. Robles has 4 of his 8 home runs against the Mets, and he is batting .357. Last night, Robles had the rare feat of combining a bunt single with a home run in a game. In the 7th inning, Mets reliever Tyler Bashlor seemed to deliberately buzz Robles’ tower with an up-and-in pitch. The dangerous pitch sent the 21 year old spinning out of the way of a head shot and onto the dirt.

It will take more than the Nats home run leader, Victor Robles, to win this rubber game of this series. Yes, Robles is the unlikely team leader in home runs and is on a 32 home run pace this season, and besides Howie Kendrick and Anthony Rendon, the other Nats have to step-up at the plate. Starting pitcher Anibal Sanchez must also step-up on the mound this afternoon, and the defense has to back-up their pitch-to-weak-contact pitcher.

“The balls are going to be in-play a lot so you have to be ready to field the balls,” manager Dave Martinez said. “You have to play good defense behind him. Let him go out there and do his thing.”

Last season, Sanchez led the Majors in weak contact induced. General manager Mike Rizzo signed Sanchez to a lucrative deal with the knowledge that the 35 year old relies on competent defense behind him since he is not a strikeout pitcher.

“Hit, pitch, play defense. I think we’ve been doing a little bit of everything, but at different times,” Kendrick said last night. “That’s what happens when it all comes together. Hopefully, we can consistently do that moving forward.”

The Mets send Zack Wheeler to the mound. His team is below .500 at 20-21 with a fanbase calling for a change at manager as Mickey Callaway‘s team has struggled. He was hired last year to return the Mets to the playoffs, and his boss, Brodie Van Wagenen who is an agent turned G.M. basically guaranteed the playoffs setting high expectations.  He got Mets ownership to spend big. BVW added four players with All-Star pedigree like Robinson Cano, Jed Lowrie, Wilson Ramos and closer Edwin Diaz. Lowrie has not played an inning this season for the Mets after his All-Star season last year.

“I think this will and should be a playoff team,” Van Wagenen said during the off-season.

Fortunately, the Nationals have had some players with good success against today’s starter especially Adam Eaton, Robles, Kurt Suzuki, and Gerardo Parra. 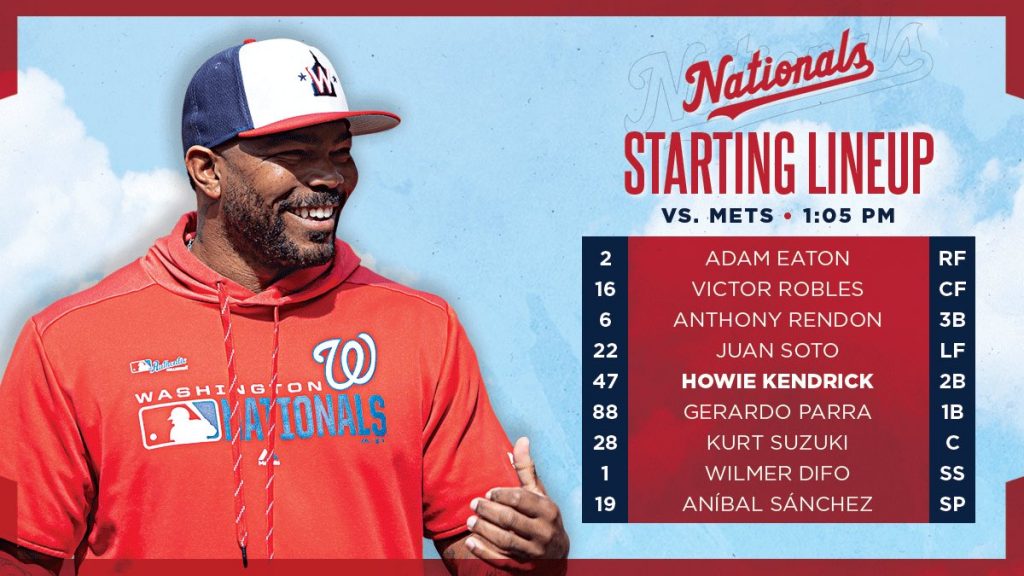