The Trevor Rosenthal predicament; Can a negative become a positive for the Washington Nationals? 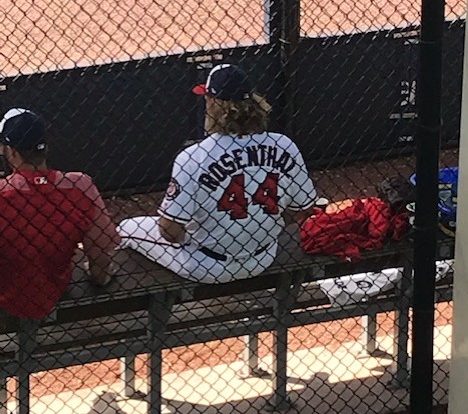 Trevor Rosenthal watches and waits from the bullpen. (Photo for TalkNats by Lynn G)

When free agency opened after the 2018 World Series, general manager Mike Rizzo wasted no time signing Trevor Rosenthal as the first free agent signing of the off-season on October 31st aka Halloween. With a signing comes the expectations that the team did their due diligence especially when you could be committing $15 million to a player coming off of a Tommy John surgery. In hindsight, that due diligence was provided from Jay Robertson who was the only Nationals scout attending a showcase where Rosenthal threw in front of 40 men armed with radar guns in one hand and charts in the other.

The entire showcase for Rosenthal was 36-pitches on that warm day on October 3rd. It was held at a school, UC Irvine, that agent Scott Boras uses in the Los Angeles area.  The former All-Star closer touched 99 mph on the flashing radar guns with his fastball and high 80s with his slider and changeup. What you did not see was a win probability chart like the one that went from positive to negative on March 30, 2019 which was Rosenthal’s debut with the Washington Nationals against the rival New York Mets. In his showcase, Rosey was not facing live batters. Wilson Ramos was not standing in that batters box like he was in that debut game. Nor was Jeff McNeil, Amed Rosario or J.D. Davis. All four would score that day. When Rosenthal entered, the score in Nationals Park was a 4-4 tie. At the innings end, the Nationals were behind 8-4, and the panic buttons were pushed.

Rosenthal was over 1 ½ years removed from his Tommy John surgery when he made that pitch to Ramos. Some pitchers are back in live game action a year after TJ surgery.  Rosenthal had an ERA of infinity for a total of four games as he never recorded an out. Some of that was due to bad luck, but most of it was due to poor pitching. Teammates like Max Scherzer were encouraging. Others collectively felt the entire bullpen spin out of control. It is like a building with a poorly constructed foundation in a game of Jenga. Eventually it will all come tumbling down, and the Nationals bullpen imploded due to structural integrity issues.

There has to be some healthy skepticism any time the Washington Nationals sign a Scott Boras client because there is a history of bad deals. Rosenthal was a high risk/high reward signing at a time the Nationals needed low risk/high reward. The team was essentially replacing Ryan Madson‘s vacated 8th inning set-up spot.

General manager Mike Rizzo could have gone back and signed Greg Holland who was excellent for the Nationals in 2018. Holland is also a Boras client, but there were dozens of other set-up candidates available besides Holland and Rosenthal.  One of the problems in dealing with Boras that makes deals so complicated is the high price tag.

There are also instances of bailing out Boras like with the February 24, 2017 signing of Matt Wieters. Spring Training had begun and there was no spot on any team for Wieters. Why pay him like he was a star which the Nats did. He was not even ready to play baseball due to an injury to his arm that he claimed happened when a jar fell on it. Not only was paying Wieters $10.5 million a year a financial disaster, he was a combined -1.0 WAR in his two seasons with the Nationals plus he had a meltdown in the decisive game 5 of the 2017 NLDS. Financially, he pushed the team over the CBT payroll cap both years if you consider his dollars as the straw that broke the camel’s back.

Before Wieters, the Nats bailed out Boras and signed Rafael Soriano aka Mr. Untuck. His act got tired quickly and not only was he the highest paid closer at the time, he also cost the Nationals their first draft pick in 2013 which they had to forfeit when they signed him. So yes, there is reason for healthy skepticism with signing Boras clients because besides Max Scherzer, the track record has not been great when you look at money to production for Boras free agent signings going all the way back to Jayson Werth.

Rosenthal received a guaranteed $7 million in his deal for 2019 plus an incentives package for a maximum of $8 million which makes his deal potentially worth as much as $15 million. If Rosenthal meets certain criteria in his contract, he can also sign his player option for a $15 million deal for next season. For Rosenthal, his spring training seemed fine. He lacked command but when you are throwing 100 mph which he touched several times in spring training, it usually works if it is near the plate. The issue when the season started and the statistics count is that Rosenthal cannot find the plate. The velo is there but nothing else has worked.

“And at this point, he just doesn’t look right — right now,”  manager Dave Martinez said. “So we’ve got to figure something out.”

The Nationals are in a predicament. A bullpen crisis where other teammates are being overworked to pick up the slack.  The bullpen has stabilized with the players not named Rosenthal or Austen or Austin, but you cannot stay on a near-80-game pace for Doolittle, Barraclough, Grace, Sipp and Suero. Roles and structure have seemed better with relievers leading up to closer Sean Doolittle the last week. But you really cannot continue to have six relievers to rely on with Rosenthal’s issues. Rosenthal entered yesterday’s game at a 6-3 deficit, and by the time he exited the score was 9-3. Rosenthal gave up 3-runs in one inning of work and actually saw his ERA decrease from 40.50 to 36.00. That is unbelievable. You can give up 3-runs per inning and watch your ERA drop. Believe it or not if he gets a chance to do that again his ERA would drop some more. Rosey threw 3 wild pitches in the inning and issued a walk and hit a batter. Former Nationals star Daniel Murphy looked nervous in the batter’s box. He grounded out and was probably happy that exited back to his dugout in one piece.

Rosenthal has a lack of command. That’s a Captain Obvious statement. He is getting the ball near the plate or literally on the plate as he bounced three pitches yesterday. This is a situation worse than the Henry Rodriguez saga that Nats fans had to endure. At least HenRod was only being paid league minimum. The predicament here is what do you do with Rosenthal? He really needs to go to the minor leagues and work on his mechanics, but the Collective Bargaining Agreement allows for a player with at least 5.0 years of service to decline a demotion even if the player has minor league options, and Rosenthal does not have to accept a demotion or a bogus IL stint. So where do we go from here?

If you listened to manager Dave Martinez‘s postgame presser, he spoke to it while attempting to be supportive.

“I’ve got to really sit down and talk to him and see what’s going on,” Martinez said. “I’m not going to make any assumptions, and we’ll go from there.”

#Nats manager Davey Martinez: Trevor Rosenthal “threw the ball better” in an outing with 3 wild pitches, a hit batter, a walk & doubling a 3-run 8th inning deficit. Not throwing a player under the bus is one thing, but this quote isn’t grounded in reality. @DistrictOnDeck pic.twitter.com/ABe5byG4c3

We can either live in denial and paint rosy pictures or face the facts that Rosenthal’s issues are a combination of mechanical and mental. Rosenthal lost the March 30th game, but since then he has just put games out of reach like yesterday. Maybe he should not have pitched yesterday, but what choices does Martinez have? You cannot keep leaning on the other six members of the bullpen to carry Rosenthal’s load. If the Nats cut Rosenthal, he will certainly be picked up by another team as the Nationals are contractually bound to pay him any salary less the league minimum which gets picked up by the acquiring team. That is how it worked last year when the Nats acquired Greg Holland. So what do the Nationals do when Justin Miller is ready to be activated off of the 10-day IL? Decisions. Decisions.