Confirmed: Carter Kieboom to the Nats and Jake Noll back to Triple-A 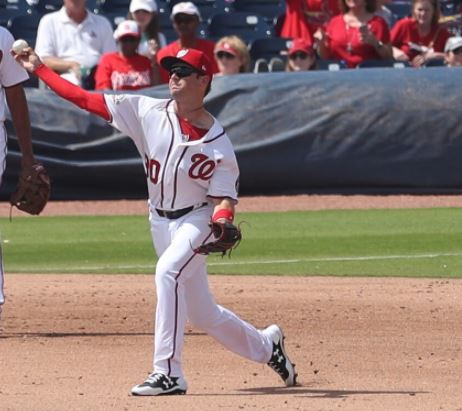 Maybe Mike Rizzo has grown tired of the mistakes made at shortstop or there is something else in play here because the Nationals top-prospect, Carter Kieboom, is being called-up for Friday’s game. The corresponding move is Jake Noll back to Triple-A, but there are plenty of other question marks with player’s health so stay tuned on that. It was a week ago from Friday when Anthony Rendon exited that game with an elbow contusion, and Ryan Zimmerman hurt his heal on Wednesday, and then there is Howie Kendrick and Juan Soto who also have painful contusions.

In Baseball America’s latest rankings, Kieboom was #37 of all prospects, and when Victor Robles‘ service time moved him from prospect to rookie status, Kieboom moved up to the #1 spot on the Nationals top prospects. The young infielder had a very good spring training with two home runs in one game off of further Hall-of-Famer Justin Verlander. Kieboom has been tearing it up in Triple-A Fresno. The morning rumors had Andrew Stevenson being called-up for Noll, but it turns out that Rizzo decided on Kieboom who is another right-handed batter. In the off-season, we thought the Nationals should pursue a left-handed batting second baseman as a complement to the right-handed Kieboom.

The Nationals are set to face three San Diego Padres left-handed pitchers which also could be the motivation in calling up Kieboom now and start his service clock. Last night, he homered as one of his two hits raising his average to .379 on the season with a 1.142 OPS. On top of that, he has been taking his walks and has an on-base percentage (OBP) of .506. Yes, you read that right. The 21-year-old was drafted by the Washington Nationals in the first round (No. 28 overall) in the 2016 MLB Draft. He has an older brothers with the Nats is Spencer Kieboom who could easily be in the Majors now if the Nats did not have Yan Gomes and Kurt Suzuki ahead of him on the depth Charts.  The Nationals got Kieboom in the draft as a comp pick when the Tigers signed Jordan Zimmermann. You can follow the Alfonso Soriano gift that keeps giving in the line to Jordan Zimmermann to Carter Kieboom. It was JZim who was drafted back in 2007 as compensation from the Cubs who signed Soriano.

“It’s an advanced approach at the plate. He’s going to be a really good big-leaguer,” Kris Kline of the Nationals front office said of Kieboom after the draft.

Kieboom developed quicker than most envisioned, and it has to be credited to his bloodline from his father, Alswinn, a former college player then to Carter’s older brothers Spencer and Trevor. In fact, his brother Trevor who was a college baseball player and is now his agent.

While baseball might be buzzing about MLB’s #1 prospect Vladimir Guerrero Jr. getting his call-up for Friday, the D.C. area can celebrate Carter Kieboom who joins a long pipeline of top prospects making an impact the big league club like Juan Soto and Victor Robles. How the Nationals will use Kieboom could be all over the infield as he was drafted as a shortstop but can certainly play second base and third base.  Kieboom’s long-term future could depend on how well he does prior to Trea Turner returning from the IL which is expected in mid-May as Turner recovers from a broken right index finger.

The Nationals will have to make a corresponding move on their 40-man roster to make room for Kieboom. This has led to some speculation on who that could be as the Nats will have to remove a player or it could be a 60-day IL move.

This entry was posted in Feature, Roster, Uncategorized. Bookmark the permalink.
← Previous Article | Next Article →