Are Long Term Free Agent Contracts Worth the Risk 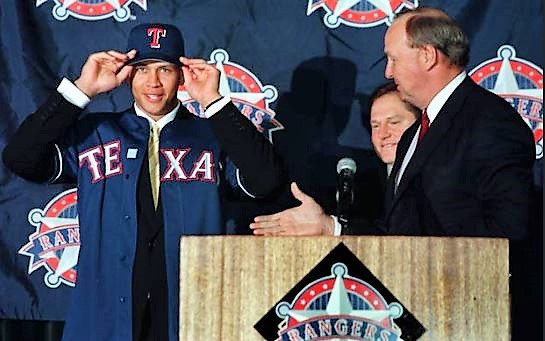 As we count down the minutes before the Bryce Harper announcement this article analyzes whether mega free agent contracts pay off for the teams and looks at some alternatives to calm the current labor situation.

Sunday morning Ryan Zimmerman joined the chorus with Sean Doolittle and Max Scherzer complaining publicly about the slower than ever free agent market, blaming teams tanking and using analytics to denigrate star players in order to keep contracts down. Certainly they have a point that the system is broken and something needs to be done but should guys who have eight and nine figures in career earnings be complaining to the fans?

Major League Baseball is making record profits despite the constant doomsday predictions on the RSN bubble bursting and the aging fan base. So sure, the players should get their fair share of the pie, but is that our problem as fans? They players have a union, that would seem to be the appropriate place to submit their complaints and leave the guys buying $85 tickets, $30 parking passes, and dropping $18 on a beer and a hot dog out of the discussion.

The most laughable line of complaint is that the top free agents are not receiving the record setting contracts they had hoped for. The implication being that if Bryce Harper, Manny Machado, Craig Kimbrel, and Dallas Keuchel all received their asking prices the average salaries league wide would rise up enough to be seen as a fair deal for all 750 players.

Here are the comments from Doolittle, Scherzer, and Zimmerman:

when it’s 3 weeks from spring training and there are still over 100 unsigned free agents including some of the biggest names in our sport https://t.co/5zN6bbkgqi

Max Scherzer had a lot of thoughts about the state of free agency this morning: "When there's too many teams not trying to win, that poisons the game."

“I don't think it takes a genius to see that something is going on. I don't know what it is, but there's too many good players out there that aren't on teams and this is an entertainment business."

Doolittle adds that it would be better for the game if it were more affordable for the average fan. So keeping tabs of his wish list this off-season, big contracts for the top free agents, more money for the minor league guys, and cheaper prices for the fans. Mark Lerner doesn’t even have to bother calling his accountant to see where he stands in this scenario.

The replies to this remind me that pace of game and defensive shifts aren’t the existential threats to baseball we need to be focusing on. Growing the game means making it more accessible and affordable while creating a space where fans feel included and connected to the product. https://t.co/npwtUKTMbi

Why has the free agent market been so slow

The three hundred million dollar question these last two off seasons has been why the free agent market has been so slow. Collusion? Advanced analytics devalues free agents? Greedy owners are tanking to profit from revenue sharing? The players signed a bad CBA that favors the owners? A combination of some or all of the above? To try to answer this question I took a look at all of the contracts signed close to a $100 million or more to see if the teams have been getting their money’s worth via performance in return for these mega contracts.

Starting with the COTS list of contracts over $90 I then used Baseball Reference to look up the total bWAR for the years under contract. Using those values I determined the number of millions of dollars spent per bWAR per contract. From the club perspective anything under four million dollars per bWAR was a fantastic bargain for the team. Players producing a bWAR for between $4-8 million would be considered a fine deal for the team. One bWAR for $8-12 million is not so great, one for $12-16 million is a bad contract, and anything over that is a disaster for the team, a huge percentage of their payroll with a negative value in return. (Note: in my opinion bWAR is not a great stat for evaluating individual players but it is perfect for getting a general idea of how to rank a group of players over a period of time)

The results were that these big contracts are pretty much a coin flip. With 13 great bargains and 21 disasters at the extreme ends and a few more decent deals than bad ones in the middle. So the question is why would any GM or owner commit over a hundred million dollars for a contract 7-10 years long when there is a 50% chance they will live to regret the deal? 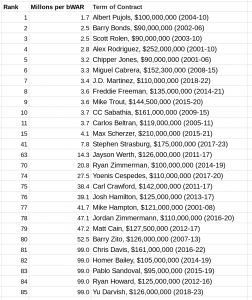 This image shows the top and bottom of the list, along with a few notable Nationals players in the middle.

One line of reasoning from the players has been that they deserve to be overpaid during their free agent years because they were underpaid during their first six to seven seasons under team control. Which makes some sense if they are staying with their original team their whole career but not when they expect for teams to compete for their services, in a free market for players GMs sure aren’t looking to pay for past performance.

So if the problem is bad contracts, what is the solution?

My solution would be to get the younger guys paid more and sooner. Give everyone on the 40 man roster the league minimum half million per year and start their service clocks. This gets good paychecks in the pockets of a lot of career minor league players who may otherwise end their run never having made a single decent salary. It also helps the star players by getting them to free agency a year or two sooner. Paying 15 more guys a half a mil each per season across 30 teams will also immediately raise the base level of salaries.

Free agency would remain unchanged. If a team is willing to throw two or three hundred million at a star player so be it. If the majority of teams decided that shorter team contracts with higher AAV were a better risk than that is fine as well, the best players still get paid, just fewer of them will collect $20 million a year to stink up the league.

The issue of tanking has been over-stated, there are small market teams that have trouble competing even with revenue sharing and there are big market teams on down cycles re-loading to make another run. Tanking is one issue that both the teams and players can agree on, it sure doesn’t help the Nats if the Marlins feast on revenue sharing indefinitely. So let the league handle extreme cases and otherwise allow teams to progress through a natural cycle.

Finally, I believe that one of the big issues with the current system is the blind bidding process, where teams are not allowed to speak to the media or to each other. So if I own the Blue Jays and I want to bid on Harper by rule I have no idea if I’m bidding $50 or $50 million more than the GM from the Twins. Teams have taken the approach that they need to sit back and wait until spring training opens before the agents come back with the actual deals they will accept. Allowing teams to make their offers known will allow for bidding wars more in line with the NFL and NBA where the top players are snatched up within hours or days of hitting the market.

This entry was posted in Analysis, Feature, RyanZimmerman, Scherzer and tagged Bryce Harper. Bookmark the permalink.
← Previous Article | Next Article →