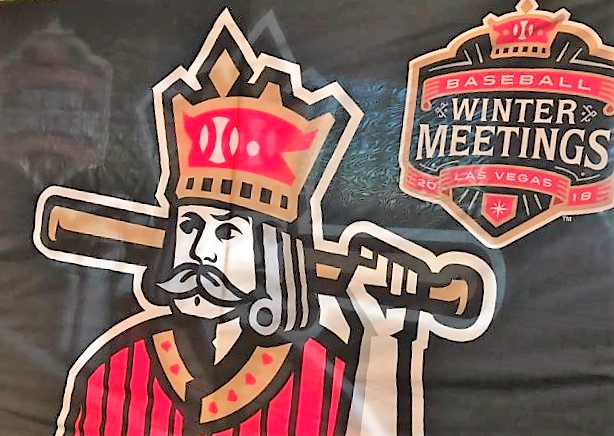 This is it! The 2018 Winter Meetings begin today in Las Vegas at the Mandalay Resort.  This is a televised event and should be the most dramatic Winter Meetings ever because Las Vegas resident and top free agent, Bryce Harper, will be making multiple appearances at the event as he meets with general managers who are interested in acquiring his services. Some have said that there are no less than a dozen teams in the running, but that just does not seem plausible if you believe recent reports which would take the St. Louis Cardinals, Chicago Cubs, New York Mets, Atlanta Braves, and the Washington Nationals out of the bidding. The Cardinals just snagged Paul Goldschmidt in a trade and the Mets traded for Robinson Cano and Edwin Diaz, and the Braves signed Josh Donaldson. On top of that, Las Vegas resident Kris Bryant was rumored a month ago to have been made available via trade by his Chicago Cubs team.

From signing Bryce Harper to now possibly trading Kris Bryant? Man you hate to see that

The Washington Nationals have already done their part to heat up the “Hot Stove” and they took the #3 top free agent off the board this past week as he is the first top 5 free agent to sign a new deal, and in the top 25 Nathan Eovaldi (8) and Josh Donaldson (23) have also signed with Eovaldi going back to the Red Sox. You just never know which way a team goes this off-season and then into the regular season. There are so many questions on the pursuit of free agents, prospects and trading for star players.

Trade and free agent negotiations are a high stakes poker game. We always like to say there is plenty of bluffing and G.M.’s and agents pushing their chips into the middle along with enough BS to fill a bag of manure, and Las Vegas is the perfect setting for this irony.

At the Patrick Corbin presser on Friday, the seismic readings spiked on the Bryce Harper negotiations when the Nationals seemingly pulled out –or– pulled back based on your point of view when the Nationals’ owner was interviewed on 106.7 radio and the subject turned to Harper.

“If [Bryce] chooses some other [team], I totally understand,” principal owner Mark Lerner said. It’s the opportunity of a lifetime for Bryce and [his wife] Kayla and their family. But we have no hard feelings about it, I must say. I love Bryce, and he was a good teammate here. If he chooses to go some place else, I totally understand it, but we put one heck of an offer out there.”

We reported the offer at 10 years and $280 million to Harper, and it was a week later when Chelsea Janes of the Washington Post reported that the final number was a $300 million for 10 years. Technically both could be accurate, but nobody from the team or Harper’s side has commented on the actual number. The negotiations did not start with a lowball offer and went right to record levels and the highest ever offered to a free agent and the second highest total offer only trailing Giancarlo Stanton‘s $325 million deal for 13 years ($25 million per year). The Lerners seemed to give a little room for negotiating the final details, but Harper walked away.

“Well, when we met with them and we gave them the offer,” Lerner said. “We told them, ‘This is the best we can do.’ We went right to the finish line very quickly.’ And we said, ‘If this is of interest to you, please come back to us and we’ll see whether we can finish it up.’…We’ve always been honest with [Bryce]. My dad and I have both sat with him. He’s great, a terrific young man, very respectful. And, if we can’t do it, we can’t do it. Who knows what’ll happen the next few weeks? I don’t know. You don’t know. But, if he leaves, we wish him nothing but the best.”

With the teams reportedly dwindling on Bryce Harper, timing could come into play as scummy agent Dan Lozano who represents Manny Machado, in a perfect pairing, could take the Yankees or Phillies out of the Harper sweepstakes if either acquires Machado first. They say timing is everything, and there will not be enough money around for the Yankees to make two-mega deals, and most likely could take the Phillies out of the running as they could fill their outfield hole with one of the many other top free agent outfielders like Michael Brantley or A.J. Pollock.

Too often teams are bidding against themselves, and some teams are smart enough to know it. Some have said that the Nationals bid against themselves in the pursuit of Corbin but we were assured by sources that was not the case, rather the Nationals upped their bid from $126 million to $140 million to close the deal and pitch the shutout — giving the Phillies no chance to re-enter the playing field to even outbid as was speculated in a tweet by USA Today’s Bob Nightengale. Even if the Nationals overpaid by a little, this was not the classic bid against yourselves as some speculated the Tigers did with Prince Fielder (nine-year, $214 million) and the Orioles with Chris Davis (seven-year, $161 million).

Last year, the market started off hot with the Shohei Ohtani sweepstakes followed by the Giancarlo Stanton trade. Then there was silence. Very few deals got done, and the market went soft as teams found numerous bargains. Top free agents like J.D. Martinez and Jake Arrieta did not get close to the dollars that were projected. Martinez signed 3-days before March 1st for $110 million after the demands were for more than double that. You just never know in the end.

Teams have multiple options between free agency and trades as the Indians are rumored to be dangling Corey Kluber or Trevor Bauer as trade bait. The Marlins will once again look to trade J.T. Realmuto, and the Dodgers could once again try to move Matt Kemp or Yasiel Puig to lower than payroll and open a spot for Harper.

For Nationals’ general manager Mike Rizzo and staff, Sao Magnifico in great detail listed who the Nationals could be looking at to fill some holes. The team has top priorities to grab a back-end starter in that Jeremy Hellickson role, a lefty back-up first baseman in that Matt Adams role, and if there is enough money left they can pursue one of the many second baseman on the market where a lefty batting upgrade to the switch-hitting Wilmer Difo could be paired up with the right-handed Howie Kendrick who is still questionable how mobile he will be as he returns from achilles tendon injury.

It is possible that Rizzo could look to find one player to fill the second base and first base holes and those players could be Jed Lowrie, Daniel Murphy, and Derek Dietrich who fill the criteria. Lowrie became an All-Star for the first time in his career in 2018 at the age of 34 and turned in his all-around season of his career with a +6.1 UZR, 1.0 DRS, and a +4.9 WAR. Lowrie has 11 career games at first base which is not many, but he has played the position before making him a candidate to serious consider. You then have a player like Asdrubal Cabrera who could probably learn how to play first base and could fit all of the criteria. 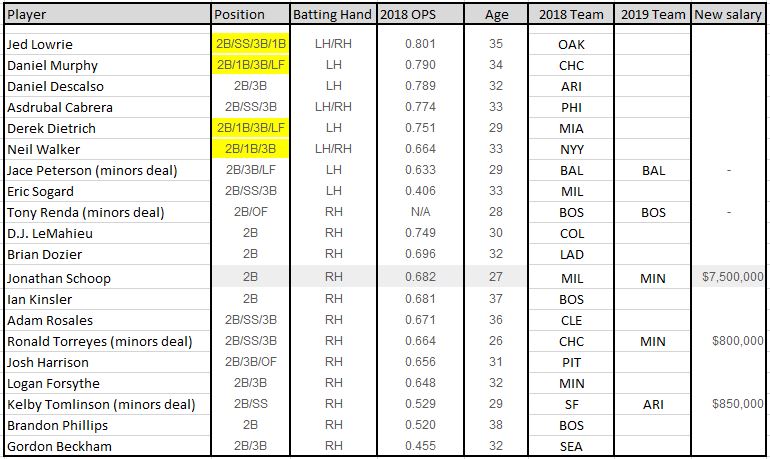