How are the #Cubs Arizona Fall Leaguers doing?

Posted on November 3, 2018 by SaoMagnifico 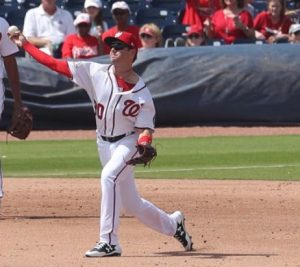 OK, you’re probably thinking: This is a Washington Nationals blog! Why are we talking about nine prospects from the Chicago Cubs, a team most of us actively dislike?

Well, think back to the trade the Nats made shipping Daniel Murphy to Wrigleyville back in August, and this is why:

Also worth noting: Rizzo says in addition to minor league infielder Andruw Monasterio, Nats will get a player to be named later from the Cubs, who will be monitored through the Arizona Fall League.

This was confirmed by Chelsea Janes of The Washington Post:

Rizzo said the Cubs probably also will include a player to be named later, one to be determined after the Arizona Fall League season.

If that player is one who participates in the AFL and that is the reason for the delay, then this deal could look quite different for the Nationals. AFL players generally have stature within a system, and many are among an organization’s top five prospects. No one has confirmed that a player of that caliber will be available when the deal is finalized, though Rizzo did go out of his way to include the timeline when announcing the deal.

A word of caution before we get too much further: Player To Be Named Later agreements are almost always subject to change. Nats fans likely remember that Trea Turner was the PTBNL in the three-way swap that saw the Nats give up Steven Souza Jr. for Joe Ross and a PTBNL widely known to be Turner back in 2014. But that’s an exception to the way these swaps usually work. Sometimes, teams will agree after the fact to exchange cash considerations instead of a player. A lot of the time, PTBNLs are not top prospects.

That being said, it’s noteworthy that the PTBNL said to be heading to D.C. is one suggested to be playing in the Arizona Fall League right now. If that’s not an elaborate head fake, then there are eight options.

Why just eight? The Cubs have nine prospects in the Arizona Fall League, right? Well, one of those prospects is young shortstop Nico Hoerner, who was drafted earlier this year. Hoerner isn’t eligible to be traded until one year after his draft date, so we can cross him off the list right now. So: eight.

Clark, 24 in December, pitched between Chicago’s Single-A and High-A affiliates this season, along with a few rehab innings at the Cubs’ Arizona summer complex. He worked mostly in relief, tallying a 1.89 ERA over 57 innings. In the AFL, he owns a 2.25 ERA over eight innings, but he’s issued as many walks as he has strikeouts. He is one of the Cubs’ two representatives in today’s Fall Stars Game. A right-hander, Clark isn’t quite to the point where he is definitely too old for the level, but he hasn’t been a quick riser, either; this was his third professional season, and he has yet to reach Double-A. That’s not as big a deal for relievers as it is for starters and position players, but it’s worth noting.

Leal, 24 in March, spent his season as a swingman for the Cubs’ High-A affiliate, pitching to a strong 1.41 ERA over 63⅔ innings. He struck out nearly a batter per nine and kept walks down. In the AFL, he’s worked exclusively as a starter, appearing in four games; he has yet to allow a run, although he’s struggled a bit more than usual with command. Leal, a Venezuelan, has been pitching professionally in the Cubs system since 2012. He missed 2017 entirely due to Tommy John surgery but seems to have bounced back nicely this season. He pitches right-handed.

Rondon, 24 in March, made just one start in 28 games between Single-A and High-A this season, pitching to a 2.65 ERA over 51 innings. He posted a double-digit strikeout rate but walked more than half a batter per inning, so you can kind of see what pitcher archetype he fits. In the AFL, he has struggled to a 5.19 ERA, making two starts out of five appearances so far and issuing as many walks as strikeouts. He’s been pitching professionally for the Cubs since 2013 after signing out of Venezuela. He is a left-hander who can reach the high 90s with his sinking fastball.

Steele, 24 in July, worked exclusively as a starter in the Cubs system this year, making eleven starts between Single-A, High-A, and Double-A. He turned in a 2.31 ERA in 46⅔ innings after returning from mid-2017 Tommy John surgery. He struck out more than a batter per nine without a very high walk rate. In the AFL, he has had some difficulties in his four appearances, all of them starts: 6.75 ERA in 10⅔ innings, walking almost as many batters as he has struck out. He was drafted as a teenager and this was his fifth professional season. He pitches left-handed. Steele is the Cubs’ #8 prospect according to MLB Pipeline.

Higgins, 26 in May, is a righty-swinging catcher who displayed some gap power this season but didn’t put many over the fence. He posted a .271/.719 line across High-A and Double-A this season, doing most of his damage at the lower level. In the AFL, he’s limped to a .148/.553 slash in seven games. This was his fourth professional season in the Cubs system, and he’s never really recaptured his form from his 2015 debut in short-season ball. A point in his favor: He doesn’t strike out much, with just 67 Ks in 110 games this year and fewer strikeouts than walks so far in fall ball.

Pereda, 23 in April, is another catching prospect the Cubs sent to the AFL this fall, because why have one Cubs minor league catcher on the Mesa Solar Sox when you can have two? He also hits right-handed and had an eerily similar batting line of .272/.710 this season, which he spent entirely at the High-A level. In the AFL, he has a .238/.619 batting line in six games. Signed out of Venezuela, he’s been playing in the Cubs system since 2013.

Giambrone, 25 in December, is a small second baseman (5′ 8″, 175 lbs!) who spent his whole season at the Double-A level, turning in a .251/.772 slash line. Despite his size, he showed off some noteworthy power this season, homering seventeen times in 116 games, along with some serious speed, stealing 26 bases in 35 attempts. In the AFL, he’s been doing very well with a .429/1.179 line in seven games, although he missed the cut for the Fall Stars Game somehow. He bats from the right side. Giambrone is the Cubs’ #29 prospect according to MLB Pipeline.

Wilson, 22 as of last month, is a left-handed outfielder who also comes in on the small side (5′ 8″, 177 lbs). He had a pretty disappointing season, with a .219/.602 batting line over 64 games of High-A ball and just ten steals in sixteen attempts. In the AFL, he has a lowly .116/.360 batting line over eleven games. He’s nonetheless regarded well in the organization, it appears. Wilson is the Cubs’ #16 prospect according to MLB Pipeline.

An update on the Nats…

UPDATE: Here is the MLB.com simulcast.

This entry was posted in AFL, Analysis, Murphy, Prospects. Bookmark the permalink.
← Previous Article | Next Article →