Today the fine analysts at MLB Trade Rumors prepared their estimates for arbitration eligible players as well as Super Two players. It is clear who six of the Washington Nationals arbitration eligible players are this off-season, but there is a player who could receive 4 years of arbitration if he receives Super Two designation — and that player is Trea Turner. While Turner has 2.135 years of service time, players have not been informed if they have reached Super Two, but consider 2.120-2.150 is the range generally. MLBTR is estimating a hefty raise for Turner to $5.3 million if he receives Super Two status which would be a nice wedding present for the Turner’s. To qualify for the Super Two designation, players must rank in the top 22% in terms of service time among those MLB players who have accumulated at least two years of service time and less than three years.

It should not surprise anyone if Roark, Taylor, and Solis are non-tendered which would make them free agents. The last Nationals pitcher who was non-tendered was Craig Stammen as he was recovering from flexor tendon surgery, however he did try to negotiate a one-year contract with Stammen before the non-tender deadline. Like general manager Mike Rizzo attempted to do with Stammen, he can do with other players and negotiate a set contract before tendering a contract to an arbitration-eligible player.

Two years ago the Nationals tendered a contract to Derek Norris and then released him during Spring Training making the Nats responsible for one-sixth of the $4.2 million he was owed that season. After the 2016 season, the Nationals non-tendered outfielder Ben Revere (thanks H. Weiner for that reminder). The Nationals could go with numerous strategies to retain/release/trade Roark, Taylor and/or Solis. They could also tender deals to those players and go into Spring Training and decide by the second week of March to release a tendered player and eat 1/6th of their deal. On Roark, that gamble could cost them approximately $1.63 million. Stay tuned on that as well as whether or not Trea Turner reaches Super Two status.

We have also reconfigured our salary chart, and with Turner’s Arb 1 the Nationals would have $52.8 million to spend on free agents which includes Bryce Harper.

“…It’s going to be an exciting future for the Nationals, and we’ll see if I’m in those plans” — Bryce Harper 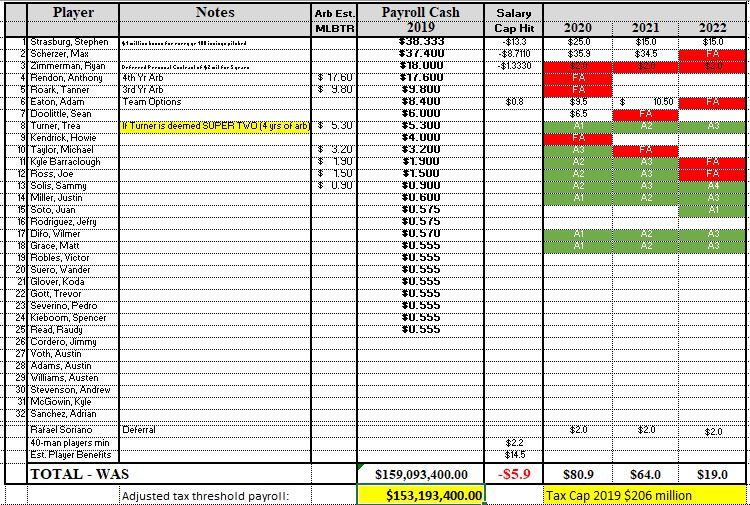 Here is the list of pending free agent starting pitchers:

With the Nationals acquisition of Kyle Barraclough on Wednesday, we have updated the charts to reflect his numbers.