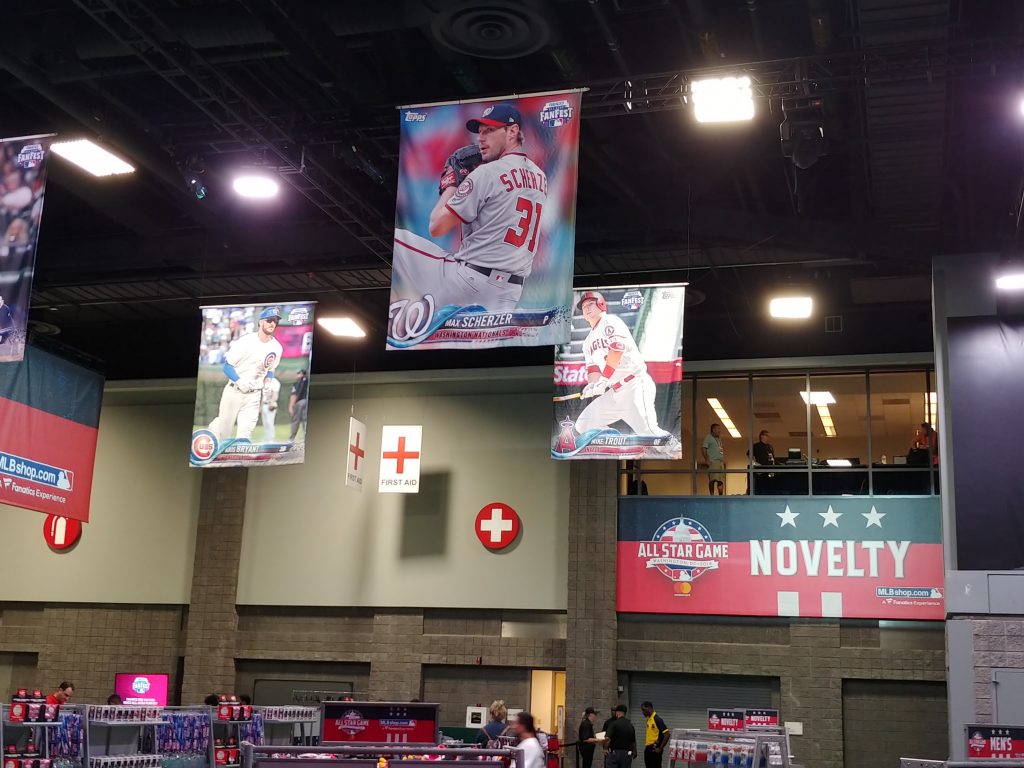 My 10-year-old and I had a blast this week at the All-Star festivities. We went to the All-Star Fanfest twice and to all three days of games (Futures, HR Derby, All-Star game) at Nationals Park. We also went to Miami last year for that All-Star game and are starting to plan to go to Cleveland next year for their All-Star game. The All-Star week is so much fun for us hard-core fans.

“[All-Star game] on FOX had lowest viewership on record, while [Home Run] Derby on ESPN, despite Harper-Schwarber theatrics, was down 32% without heavy dose of star power in the field.”

The All-Star festivities are in need of improvement, and here are some ideas:

I understand the short-sighted reason to have the ASG on a Tuesday, but moving it to a weekend is a no-brainer. Sure, the teams may lose some good gate revenue, but they need to use the All Star events to build the MLB brand, especially to young people who probably aren’t staying awake until 10:30pm on a Monday to watch the derby.

Let the top prospects compete to be the Fastest, Strongest, and Hardest Throwing Prospects – MLB should help these guys build reputations before they enter the league. Maybe make the actual Futures Game 5 innings long – it doesn’t need to be 9 innings.

3) Get Rid of the Celebrity Game

Does anyone really care about watching Bill Nye play softball? My son and I left after about 7 innings of the Futures Game and had no interest in watching the softball game. In its place, again, perhaps MLB can start building reputations for future players with a high school “All American” game that also has competitions like the Futures Game – the High School HR Derby during the Home Run Derby was actually quite compelling.

I didn’t understand why the ballplayers were out shagging flies and talking to each other in the outfield before Monday’s and Tuesday’s events. During BP, the stars (and Mascots) should be signing autographs (on the field or on the concourse) while fans could be selected to shag fly balls – have a contest the few weeks before the game to select the shaggers. (As an aside, the kids who shagged flies during the Home Run Derby were waaaay too young and some of them could have gotten hurt). And perhaps players can also sign autographs or take pics with fans after they exit the All Star Game?

If we want celebrities to participate in the festivities, how about put them on the field shagging flies during the HR Derby. Give them Go Pro cameras on their hats and mic them up. How about every time a celebrity catches a ball, some money goes to their favorite charity. Oh, and toss all of those balls into the crowd for more souvenirs.

Maybe a NCAA-style running contest around the bases – who wouldn’t want to watch Trea Turner vs Billy Hamilton and settle it for good as to who is the fastest? What pitchers can throw the hardest? What outfielders can throw most accurately? Let the competitions happen in between rounds of the Home Run Derby.

Anything goes with substitutions – pinch run for every hit if necessary. Let pitchers exit and re-enter if they’d like. The first two innings of Max Scherzer facing the great AL batters was fantastic – I want more great match-ups throughout the game. Perhaps shorten the total length of the all star game -it doesn’t need to be 9 innings.

The Nationals did their typical small-time games on the big screen – “dinger of the day,” “Name that tune” and other junk promos. I’d rather see the players (or other celebs) participating and MLB finding ways for fans to gamble on the outcomes. Also, have the players make predictions for the Derby and ASG and let the fans bet on them online – presumably the new Supreme Court ruling can pave the way for this – gambling on the game would amplify its popularity.

We had the Racing Presidents on Monday and Tuesday – why not race a lot more mascots? Let’s do an NCAA-style tournament throughout the weekend. It won’t be a big shock when the home team’s mascot is victorious, but it will be fun. Run the competition throughout the weekend and hand out brackets.

10) Make the Stadium Concourse More of a Carnival.

I didn’t even notice the activities that were going on outside the stadium, but I heard they were cool. Bring the fun inside the games with more fan games on the concourse for prizes. Bring parts of the fanfest into the stadium like speed pitch and batting. Have retired guys (or better yet, current guys) signing autographs. Turn the stadium into more of a festival.

One of the most powerful parts of the ASG was the Stand up to Cancer segment, but MLB should use that opportunity to raise money. During that segment and for the entire next inning, put up a phone number and a “counter” and encourage people to donate to the cause.

I was just at the @mlb #AllStarGame. It was a lot of fun!! I got a picture of “Big Papi” and the best part of all was that I gotta baseball from the AL bullpen catcher!! I got to see dingers from Judge and Trout and I got to see a lot of really nasty pitches. pic.twitter.com/z52rOGMZJV

It’s not Mike Trout’s fault that baseball squanders great marketing opportunities. They will always be able to sell tickets to the All-Star festivities for big bucks, but they need to better leverage the events to have lasting benefit on the sport. This All-Star week was super pleasurable for my son, me, and many other hardcore fans, but it missed the mark on building MLB’s brand.