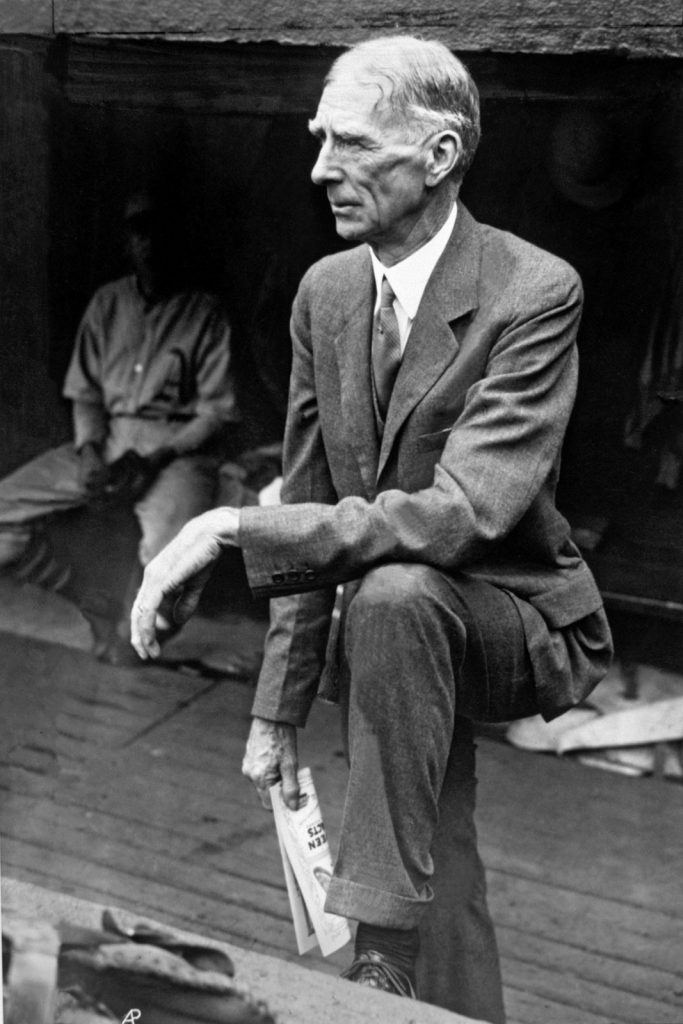 The legendary Manager Connie Mack 53 Years of managing the Pirates and the Philadelphia Athletics. Mack made his playing debut as a Catcher with the Washington Nationals in 1886.

We look at the various professions across the landscape with a mixture of acknowledgement and respect.  A Physician papers the walls with certificates and diplomas.  That age-old practice isn’t there for the Doc’s ego.  It’s to impress upon you that this is someone who knows what they are saying.  No certificate display is needed by the Welder high up in the air joining beams on the construction site.  Using electricity to melt metal together is a skill and knowledge set possessed by a tiny portion of the population.  Even the die-hard DIY warrior will eventually run into a job beyond their comfort zone.  It’s time to then call in the Licensed Master Plumber or Electrician.  The combination of theoretical knowledge and practical skills these various professionals have accumulated grants them “Expert” status with all the attendant respect.  The odd profession of Major League Baseball Manager is another story altogether.  If his team is under-performing he will be widely considered to be as dim-witted and unschooled as a barnyard duck.

The career path for an MLB Manager is fairly straightforward.  All of them were professional players with the vast majority having played in the Show.  A few never made it out of the Minors. Even less were big stars like Frank Robinson.  From there it went to coaching gigs and/or Minor League helm jobs.  In almost every case, there were a number of years of understudy.  These were certainly as long or longer than the average Apprenticeship period at the various trade unions.  Most are sporting some gray on top by the time they finally get the big job as age and stress takes its toll.  Managers are baseball “Lifers.”  It takes patience and commitment to get through the gates, make the location changes, and be comfortable with the years of uncertainty it requires to finally land the helm of a big club.

All professions require the practitioner to have a quiver of skill sets.  The listing is always subject to debate and revision.  There are four major areas within the Manager umbrella: Organizational Development, Strategic Planning, Tactical Maneuvering, and Media Relations. The Organizational Development area involves all of the “People Skills” that are associated with bringing young players into the Majors, disciplining the wayward, and establishing the tenor of the group.

Strategic Planning in many jobs involves looking years down the road.  In baseball, a week can be a lifetime.  Managing the bullpen requires looking several days ahead and falls into this category.  Tactical Maneuvering encompasses all of the various decisions within a game itself.  How long to leave in the Starter?  Is it time for a Defensive Replacement?  For a slow-paced game it nonetheless poses endless questions.  The Manager’s job is to answer them.  Finally, there is the Media machine that requires daily feeding.  Woven intrinsically throughout all of them is the uber-important necessity for excellent communications skills.  The best decision available is only as good as the ability to explain it to the stakeholders.

Anytime there is a collection of skill sets there will be various levels of acumen across them.  Some managers are outstanding at Organizational Development. Players get hurt, kids come in yet the team continues to chug along.  The clubhouse is tight.  The results are positive.  If there is sufficient talent available these Managers tend to do well in the regular season.  The rub comes when the Playoffs start.  At that point all that matters are the Tactical elements of the job.  There is no time for development or long-term thinking.  It’s “All Hands on Deck” all the time.  Not every Pinch-hitter will deliver.  But, a one-run lead in the sixth means it’s time to get the aging outfielder out of there and get the kid with “Plus Speed” into the field.  This might disrupt the clubhouse in July…but not October.  The list of Managers that could not make that distinction is long.

It’s a tough and demanding position.  One aspect that makes it unique is that the average fan thinks they could do a better job of it than the professional.  It doesn’t take long on the various chat boards to find descriptions that include words like, “Idiot” and “Moron.”  Some of this is results-driven.  More is rooted in a process known as the “Ladder of Inference” described by Peter Senge in the “Fifth Discipline Fieldbook.”  When assessing performance one views and analyzes data until ultimately a conclusion is reached.  In the case of Managers this happens very quickly.  If he is deemed incompetent it’s pretty much game, set, and match.  Only data that supports the conclusion will be accepted.  Most Managers provide plenty of both positive and negative data points.  But, if you’ve deemed your guy a nitwit, you’ll only see the negative.

There are plenty of old adages to describe the situation that a Manager finds himself in when a team under-performs.  Alvin Dark, in his co-authored autobiography used one of them in the title, “When in Doubt, Fire the Manager.”  Ultimately there are only thirty of these jobs on the planet.  The number one mission for the Manager is to remain eligible for the next opening.  Being terminated is part and parcel of the equation.  Having been fired is one more experience for the resume and is not disqualifying.  The first interview question will be, “What did you learn from the experience?”  It is a position without tenure.  In the Hall of Fame there are 22 people inducted as Managers.  That’s less than one for every ten player inductees.  Only four of those Managers worked for one team: Walter Alston. Miller Huggins, Tommy Lasorda, and Earl Weaver.  All of the rest had multiple stops including Bucky Harris, who skippered Washington’s only World Championship as a Player/Manager.  Bucky had seven different stops during his twenty-nine year managerial career.

Of all the career path possibilities one might choose, Manager might be one of the more curious.  Unless one is extremely successful the apprenticeship will last much longer than the actual Journeyman period.  The Job Security is non-existent.  And, the hours are interminable.  At the end of the day the love of the game has to outweigh everything else.  Only love could drive someone to pursue such an illogical choice of professions.