How can a pitcher tell you “All my stuff was down” when it’s just not true?

They say that the key to a bad game is having a “short memory.” Tanner Roark has mastered that well as he exited “stage right” after the show last night. He stuck around for the post-game interview and stood up to the microphones, and gave one of his classic Tanner Roark post-game speeches after bombing out in another game. He didn’t say he felt fine — he actually said:

He actually continued in the interview and said, “all my stuff was down”. Maybe we have a different definition of “down” and “up”. We can play with semantics here or we can play with reality. The pitches that were put in play — and there were many of them — were up. 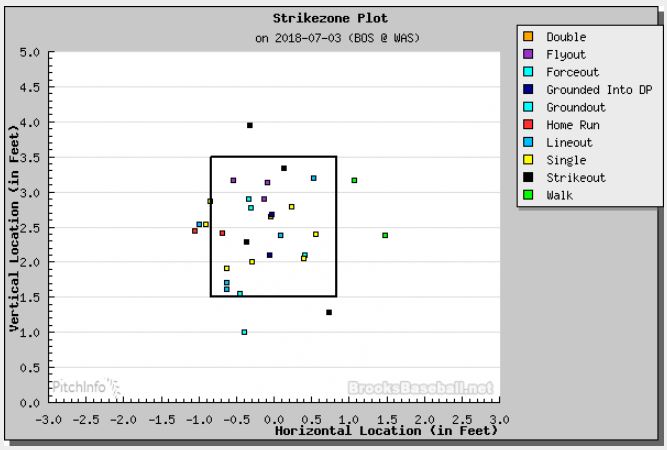 Roark was facing a rookie last night named Brian Johnson. His claim to fame before last night was that his mother was one of the Doublemint twins. On paper, you felt like the Nats had the upper hand in this game before the game started of course. Unfortunately for Nats fans, it was the young Johnson who looked like the ace out there fooling former MVP Bryce Harper and Daniel Murphy and many other Nats in his 4 2/3 innings that Red Sox manager Alex Cora cut short. He exited a game at a 9-2 score and did not qualify for the win because his manager wanted the win for the team more, and Johnson had two men on base with slugger Mark Reynolds stepping to the plate.

That was the anti-Davey Martinez move. He left Erick Fedde in last Friday night game  with an 11-5 score after he surrendered two home runs in that 5th inning so he would qualify for his first win.

If things weren’t bad enough for Roark, it was the opposing pitcher, Brian Johnson, who started the 6-run 5th inning rally with his first career hit. Shocking how rallies start. Max Scherzer got beat the night before when pitcher Rick Porcello smashed a double to the wall for 3-runs. These are American League pitchers who don’t hit in American League cities. How can that happen? I’m sorry Tanner, but that pitch was up in the zone. Here’s the chart on Johnson’s hit.

We can have convenient amnesia and spin tales for the media, and at the end of the day the videotape, the charts, and the 9-run statline doesn’t tell a story of bad luck rather it tells the same tired story where another Nats pitcher did not do his job. Except in no-hitters, there is almost always bad luck BABIP. The bloop, the doink, and the seeing eye single happens all the time, but you make your own luck by executing on big pitches.

Roark got the first out on the #8 hitter in the 5th inning in a 3-2 game then gave up the single to Johnson. After that he had Mookie Betts in a 2-2 count and left a ball over the plate that should have been a home run as Betts didn’t get enough of it and it was just a hard single. Maybe up until that point it was Roark who was lucky. He tempted fate too often with pitches that missed spots. The third time through the order the Red Sox batters attacked. It wasn’t a barrage of homers — rather they went with what the game gave them and took their singles.

For all intents and purposes, the game was over in the 5th inning. Dave Martinez called to the bullpen to start to warm-up a reliever, but luckily the guy who jacked the 3-run home run earlier in the game hit the perfectly placed doubleplay ball to end the misery in that 5th inning for Roark who exited the inning with a 77-pitch count. Martinez decided Roark should come back for two more innings to mop-up his own mess.

The Nationals record after this loss pushed them back to the line of mediocrity at 42-42. These 2018 Nationals are being defined as under-achievers, and instead of guys stepping up to the microphone and telling it like it was, they want to tell you that what you saw was just a mirage. That sums it up perfectly because right now these season with all the high expectations feels like a mirage. That oasis in the middle of the desert.

There's charts for everything in baseball. Was Tanner Roark accurate in his critique of his game last night? Here are some snippets:

"It's the best I've felt in a long time"

"Other than 2 pitches they base hit me to death. What are you going to do?"

"All my stuff was down." pic.twitter.com/e0d7gmiEuB

This entry was posted in Roark. Bookmark the permalink.
← Previous Article | Next Article →