Max Scherzer is the complete ballplayer

With two outs in an inning, you are taught as a baserunner to run on contact. Max Scherzer is a complete baseball player, and he knew about running on contact with two outs. When Wilmer Difo connected in the 14th inning, the runner on 1st base was Max Scherzer who entered the game as a pinch-hitter and singled raising his season batting average to .310. Scherzer ran on contact the near 270 feet from 1st to homeplate in 10.89 seconds with a sprint speed of 26.89 ft/sec according to Statcast™ when Difo connected for the key extra base hit in the right-field gap. 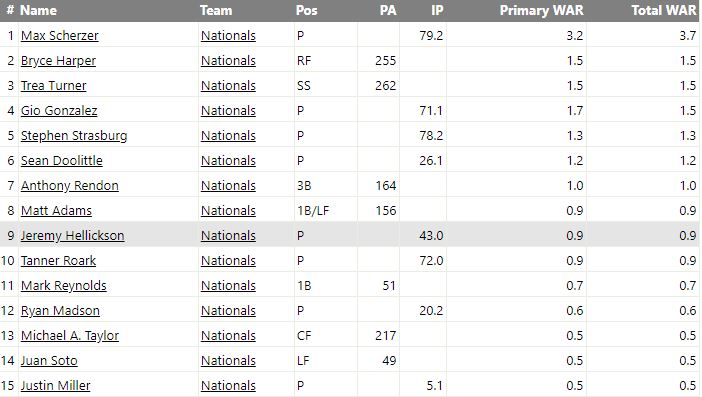 In yesterday’s game and in one swing of the bat, Max Scherzer as a pinch-hitter matched the same number of hits produced by the Nationals one-to-four hitters in the line-up who were a combined 1-for-23 in this 14-inning marathon. While the Nationals top of the order refused all game to shorten up for a hit — Max Scherzer did just that as he punched a groundball single up the middle to ignite his team.

“With my last start being in Baltimore [the designated hitter was used], I felt like I haven’t seen pitching in forever,” Scherzer said. “For me, it was just try to get in there and try to see a fastball and try to swing at a fastball. I was trying to work on it in the [batting] cage, making sure I backed it up, but I was able to get enough on it and was able to put it in the right spot. I got lucky.”

Lucky is part of it. BABIP has a luck factor, but nobody ever got a single on a strikeout. Max Scherzer put the ball in play and was rewarded with a single and shortly afterwards scored the game winning run to propel his team up the standings.

Earlier in the day, Max Scherzer learned that he won the honor of being named the NL Pitcher of the Month for May. He had also won the award for April. Maybe it was Scherzer’s batting .333 and .801 OPS that earned him the honor over Sean Newcomb and Jacob deGrom who were also stellar with their pitching in the month of May. Scherzer only had one strikeout as a batter in the month in 12 official at-bats. He also reached once on an error because he hustles and puts pressure on the defense. This season, his .556 RISP BA (5-9) leads his team.

Sure, we can debate sample sizes and the size of a man’s heart. Scherzer elevated his game because he has the heart and hustle to be more than a Cy Young pitcher which he has won 3 times. Being 100% healthy has allowed Scherzer to elevate his entire game that includes taking regular batting practice. Scherzer could not do that for most of 2016 and 2017 after he was suffering through a fractured knuckle.

“I’m telling you now, Max is just a baseball player. He really is. He’s a student of the game, he pays attention, he’s analyzing, sitting there,” Nationals manager Dave Martinez said. “ . . . He was all in. He got us going.”

Scherzer admitted he got up around the 11th inning to hit in the indoor batting cage and do his running as the Nationals bench was very short-handed due to a foot injury by Matt Adams caused Davey Martinez to go to his bench early to use Mark Reynolds. The Nationals only have been carrying a 4-man bench and were down to just Pedro Severino remaining from the bench players. In prior years, Joe Ross and Edwin Jackson were used as pinch-hitters. With neither of them on the roster, it was just a matter of time and circumstance for Scherzer to get his first pinch-hitting opportunity, and he came through in the clutch. Max Scherzer now has pinch-hitter perfection with a 1.000 batting average. Perfection and continual improvement is what Scherzer is all about. Even the way he cut those bases as he scampered from first-to-home looked like a player who does it a few times a week.

For Nationals hitting coach Kevin Long, he was already hearing it from Scherzer in the dugout. While Scherzer seeks his advice, he is a competitor who has to show he can do it in reality with what Scherzer self-describes as a High School swing. That High School swinger right now is the frontrunner for a Silver Slugger award.

“K-Long’s not going to hear the end of this thing for a while,” Scherzer said about his hitting coach. “He’s going to have to wait until the second half until I let that one go.”

Among what else Scherzer did on Saturday, he threw his side-session bullpen prep before the game to prepare for his start on Tuesday night or else he probably would have begged his manager to be the closer in Saturday night’s game. Maybe he did.

This entry was posted in Awards, Scherzer. Bookmark the permalink.
← Previous Article | Next Article →